For Immediate Release
Office of the Press Secretary
September 19, 2008

This is a pivotal moment for America's economy. Problems that originated in the credit markets -- and first showed up in the area of subprime mortgages -- have spread throughout our financial system. This has led to an erosion of confidence that has frozen many financial transactions, including loans to consumers and to businesses seeking to expand and create jobs. As a result, we must act now to protect our nation's economic health from serious risk. 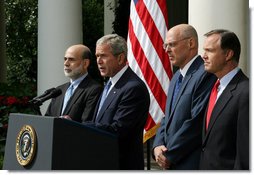 There will be ample opportunity to debate the origins of this problem. Now is the time to solve it. In our nation's history, there have been moments that require us to come together across party lines to address major challenges. This is such a moment. Last night, Secretary Paulson and Chairman Bernanke and Chairman Cox met with congressional leaders of both parties -- and they had a very good meeting. I appreciate the willingness of congressional leaders to confront this situation head on.

Our system of free enterprise rests on the conviction that the federal government should interfere in the marketplace only when necessary. Given the precarious state of today's financial markets -- and their vital importance to the daily lives of the American people -- government intervention is not only warranted, it is essential.

In recent weeks, the federal government has taken a series of measures to help promote stability in the overall economy. To avoid severe disruptions in the financial markets and to support home financing, we took action to address the situation at Fannie Mae and Freddie Mac. The Federal Reserve also acted to prevent the disorderly liquidation of the insurance company AIG. And in coordination with central banks around the world, the Fed has injected much-needed liquidity into our financial system.

These were targeted measures designed primarily to stop the problems of individual firms from spreading even more broadly. But more action is needed. We must address the root cause behind much of the instability in our markets -- the mortgage assets that have lost value during the housing decline and are now restricting the flow of credit. America's economy is facing unprecedented challenges, and we are responding with unprecedented action.

Secretary Paulson, Chairman Bernanke, and Chairman Cox have briefed leaders on Capitol Hill on the urgent need for Congress to pass legislation approving the federal government's purchase of illiquid assets, such as troubled mortgages, from banks and other financial institutions. This is a decisive step that will address underlying problems in our financial system. It will help take pressure off the balance sheets of banks and other financial institutions. It will allow them to resume lending and get our financial system moving again.

Additionally, the federal government is taking several other steps to address the trouble of our financial markets.

The Department of the Treasury is acting to restore confidence in a key element of America's financial system -- money market mutual funds. In the past, government insurance was not available for these funds, and the recent stresses on the markets have caused some to question whether these investments are safe and accessible. The Treasury Department's actions address that concern by offering government insurance for money market mutual funds. For every dollar invested in an insured fund, you will be able to take a dollar out.

The Federal Reserve is also taking steps to provide additional liquidity to money market mutual funds, which will help ease pressure on our financial markets. These measures will act as grease for the gears of our financial system, which were at risk of grinding to a halt. They will support the flow of credit to households and businesses.

The Securities and Exchange Commission has issued new rules temporarily suspending the practice of short selling on the stocks of financial institutions. This is intended to prevent investors from intentionally driving down particular stocks for their own personal gain. The SEC is also requiring certain investors to disclose their short selling, and has launched rigorous enforcement actions to detect fraud and manipulation in the market. Anyone engaging in illegal financial transactions will be caught and persecuted [sic].

Finally, when we get past the immediate challenges, my administration looks forward to working with Congress on measures to bring greater long-term transparency and reliability to the financial system -- including those in the regulatory blueprint submitted by Secretary Paulson earlier this year. Many of the regulations governing the functioning of America's markets were written in a different era. It is vital that we update them to meet the realities of today's global financial system.

The actions I just outlined reflect the considered judgment of Secretary Paulson, Chairman Bernanke, and Chairman Cox. We believe that this decisive government action is needed to preserve America's financial system and sustain America's overall economy. These measures will require us to put a significant amount of taxpayer dollars on the line. This action does entail risk. But we expect that this money will eventually be paid back. The vast majority of assets the government is planning to purchase have good value over time, because the vast majority of homeowners continue to pay their mortgages. And the risk of not acting would be far higher. Further stress on our financial markets would cause massive job losses, devastate retirement accounts, and further erode housing values, as well as dry up loans for new homes and cars and college tuitions. These are risks that America cannot afford to take.

In this difficult time, I know many Americans are wondering about the security of their finances. Every American should know that the federal government continues to enforce laws and regulations protecting your money. Through the FDIC, every savings account, checking account, and certificate of deposit is insured by the federal government for up to $100,000. The FDIC has been in existence for 75 years, and no one has ever lost a penny on an insured deposit -- and this will not change.

America's financial system is intricate and complex. But behind all the technical terminology and statistics is a critical human factor -- confidence. Confidence in our financial system and in its institutions is essential to the smooth operation of our economy, and recently that confidence has been shaken. Investors should know that the United States government is taking action to restore confidence in America's financial markets so they can thrive again.

In the long run, Americans have good reason to be confident in our economic strength. America has the most talented, productive, and entrepreneurial workers in the world. This country is the best place in the world to invest and do business. Consumers around the world continue to seek out American products, as evidenced by record-high exports. We have a flexible and resilient system that absorbs challenges and makes corrections and bounces back.

We've seen that resilience over the past eight years. Since 2001, our economy has faced a recession, the bursting of the dot-com bubble, major corporate scandals, an unprecedented attack on our homeland, a global war on terror, a series of devastating natural disasters. Our economy has weathered every one of these challenges, and still managed to grow.

We will weather this challenge too, and we must do so together. This is no time for partisanship. We must join to move urgently needed legislation as quickly as possible, without adding controversial provisions that could delay action. I will work with Democrats and Republicans alike to steer our economy through these difficult times and get back to the path of long-term growth. Thank you very much.