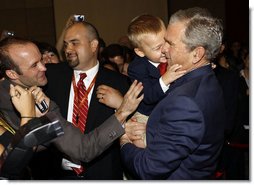 Let me start by noting that this week has a homecoming feel to it. Barbara and I always welcome the chance we have to come back to China. In fact, I think this is my 19th or 20th visit since I left the presidency, since leaving the White House. But to be here at this special time, special time in China's history, to be back in the embassy where I was proud to have served, and to be here with the members of Bush family who share our love for China and its people, is particularly gratifying, particularly moving for me.

In the 34 years since I first came to China, change has been one of the constants. Peking is now Beijing. The bicycles that used to dominate the roads have given way to more cars. And then when you come to this magnificent "Bird's Nest," the National Stadium, and the other architectural features that now dominate the landscape here, there can be no question that China has achieved something truly special in readying itself to host these Games. It is just simply remarkable.

Of course, I feel the same sense of awe standing here to behold the transformation that our beloved embassy complex has undergone here. I was feeling sentimental when I told Barbara, my wife, that my old office would be occupied by the talented translators who work in the Public Affairs Office. (Laughter.) But as usual, she snapped out -- "You mean they got someone in your office who can speak the language?" (Laughter.)

Barbara and I studied an hour a day, five days a week, but to be honest, one of the great challenges were these Chinese lessons that she and I took together. She simply refused to follow the very sacred "no laughing rule" as I spoke. (Laughter.) I was soon hoping that she would transfer out of my class. (Laughter.)

But as special as any visit to China is for us, as historic as it is to be here for the start of 2008 Summer Olympics and this new embassy opening, it means the most to us to be here with our family. That includes our daughter Doro, who was baptized here; and that includes certainly our President and First Lady; includes our son, Marvin, who is here with us today, and his wife Margaret; and everyone here. The President and the First Lady have served with such honor, served with courage and class during a historically challenging time for our nation and the world. And I am so very proud of him. (Applause.)

And so, with no further ado, the President of the United States. (Applause.)

PRESIDENT GEORGE W. BUSH: Thank you, sir. Thank you, Mr. President. (Laughter.) It is quite an honor to be introduced by your dad. This has got to be a historic moment: father and son, two Presidents, opening up an embassy. (Applause.) I suspect it's the first, although I must confess I haven't done a lot of research into the itinerary of the Adams boys. (Laughter.) 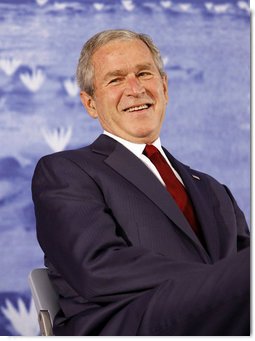 Mr. Ambassador, honored guests, Laura and I, and my brother and my sister, are proud to be here with our dad as we open and dedicate this new embassy.

No doubt this is an impressive complex. To me it speaks of the importance of our relations with China. It reflects the solid foundation underpinning our relations. It is a commitment to strengthen that foundation for years to come.

I thank all those who designed and built the embassy, and all those who work here to advance the interests and values of our great nation. Dad and I are honored that Counselor Dai has joined us; and Minister Xie; Ambassador Zhou -- who, by the way, opened a new Chinese embassy in Washington, D.C., designed by I.M. Pei a couple weeks ago.

We appreciate our friend Anne Johnson being here, Director of the Art in Embassies Program. Dr. Kissinger, thanks for coming. (Applause.)

It takes a special band to open the embassy -- out of West Texas -- Odessa, Texas, for that matter, the Gatlin boys are with us today. (Applause.) I thank the Red Poppies -- (applause) -- thank you for your talent. (Applause.) And finally, I want to pay tribute to Sandy Randt, who has done a fabulous job as our Ambassador to China. Sandy, thank you and

We're proud to be here with those citizens of ours who work at the embassy, and we say thanks to the Chinese nationals who make our embassy go, as well.

I'm honored to represent the United States at the Opening Ceremonies of the Olympic Games here in Beijing. And I'm looking forward to cheering our athletes on. (Applause.) Mr. Ambassador, I'm not making any predictions about medal counts -- (laughter) -- but I can tell you the U.S. athletes are ready to come and compete, in the spirit of friendship.

You know, during my last visit here I had the opportunity to break in the mountain biking course. I was so proud of my efforts, I told Laura I was thinking about entering the competition myself. (Laughter.) She reminded me they don't give any medals for last place. (Laughter.)

Tonight the Olympic torch will light the home of an ancient civilization with a grand history. Thousands of years ago, the Chinese people developed a common language and unified a great nation. China became the center for art and literature, commerce and philosophy. China advanced the frontiers of knowledge in medicine, astronomy, navigation, engineering, and many other fields. And the Chinese are even said to have invented the parachute -- something for which the 41st President is very grateful. (Laughter and applause.) 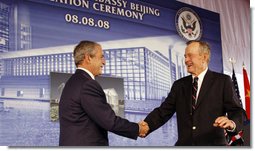 We share a long history. The first American ship arrived in China just after the year we won our independence. World War II, Americans and Chinese fought side by side to liberate this land from Imperial Japan. We all remember very clearly, Dr. K, when President Nixon came to Beijing to begin a new era of dialogue between our nations. You might remember that yourself. (Laughter.)

Today the United States and China have built a strong relationship, rooted in common interests. China has opened its economy and begun to unleash the entrepreneurial spirit of its people. America will continue to support China on the path toward a free economy.

We're also cooperating to fight pandemic diseases and respond to natural disasters. And through the six-party talks, we're working together to ensure that the Korean Peninsula is free of nuclear weapons.

The relationship between our nations is constructive and cooperative and candid. We'll continue to be candid about our mutual global responsibilities. We must work together to protect the environment and help people in the developing world; continue to be candid about our belief that all people should have the freedom to say what they think and worship as they choose. We strongly believe societies which allow the free expression of ideas tend to be the most prosperous and the most peaceful.

I'm honored to be with you. I appreciate the honor of dedicating this new embassy. And I'm looking forward to going to the Games. (Laughter.) God bless. (Applause.) 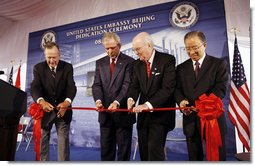 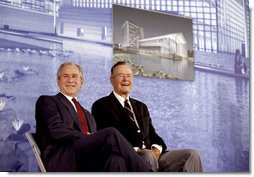