For Immediate Release
Office of the Press Secretary
May 4, 2008

THE PRESIDENT: Thank you very much. Superintendent, thank you for that kind introduction. Governor Sebelius, thank you for being here. Senator Brownback, Senator Roberts, Congressman Tiahrt, Mayor Janssen, Mayor-Elect Dixson, City Administrator Hewitt, Principal Fulton, members of the administration, faculty and staff, distinguished guests, family, friends, and most importantly, the Class of 2008. (Applause.) 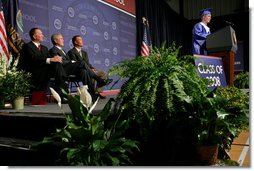 I am honored to be at Greensburg High School -- home of the Rangers. (Applause.) As some of you may know, I used to be one of the owners of a baseball team with that name. (Laughter.) So from one Ranger fan to another, I give you this message: "Beat 'em up, beat 'em up, G-H-S." (Applause.)

And I thank you for rescheduling this ceremony so I could make it. (Laughter.) I know you originally planned to hold the commencement next weekend -- it's the same weekend as my daughter's wedding. I could have suggested changing the date of the wedding instead -- (laughter) -- I think we all know how that would have turned out. (Laughter.) So thanks so very much.

It is fitting that we hold the commencement on this day -- because it marks the one-year anniversary of the tornado that forever changed your lives. Those of you who lived through the storm remember your ears popping from the change in the air pressure. You remember huddling with your loved ones in basements. And when it was safe to come out, you remember the shock of seeing your entire town in ruins.

At this ceremony, we celebrate your year-long journey from tragedy to triumph. We celebrate the resurgence of a town that stood tall when its buildings and homes were laid low. We celebrate the power of faith, the love of family, and the bonds of friendship that guided you through the disaster. And finally, we celebrate the resilience of 18 seniors who grow closer together when the world around them blew apart. When the Class of 2008 walks across the stage today you will send a powerful message to our nation: Greensburg, Kansas is back -- and its best days are ahead. (Applause.)

To reach this day, the Class of 2008 has overcome challenges unlike those faced by any other graduating class. You spent a year in portable classrooms that look very different from the red book -- red school you attended as freshmen. Many of you have gone home to trailers that lack the comforts of the houses you had. All of you have had to juggle a full load of schoolwork and activities while also working to help this community rebuild. Through it all, you've shown determination and perseverance -- and today you have earned the right to call yourselves graduates of Greensburg High School. And I congratulate you all on a tremendous achievement. (Applause.) 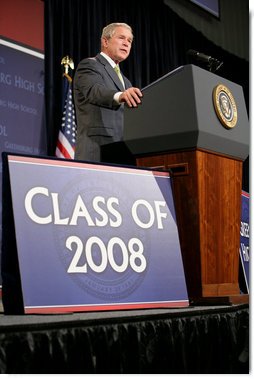 To reach this day, the Class of 2008 depended on the support of loving families. Your families are proud of what you've accomplished -- and I know you are grateful for their unconditional love. I ask all the parents to stand and receive the thanks of the Class of 2008. (Applause.)

To reach this day, the Class of 2008 also relied on the guidance and wisdom of your teachers and administrators. They have known many of you since your first day of kindergarten -- and they were determined to help you graduate in the town where your education began. Less than four months after the storm, they managed to reopen classes for the start of the new school year. Under the leadership of your superintendent and the principal, the faculty and staff of Greensburg High School have given this community stability and strength in a time of desperate need -- and today, we give them all our thanks. (Applause.)

Over the past year, the members of your class have relied on fundamental values that have given you strength and comfort as you deal with hardship, and you heal your community, and you rebuild your lives. You've learned some important lessons that will serve you for whatever you do next.

When your boys' basketball team made it to the sub-state finals, nearly every person in this town turned out. The team even got a police escort -- they say it was bigger than the one I got. (Laughter.) Your fans rushed to the court after you won on a buzzer beater to advance to the state tournament for the first time in 30 years. And I have been told that the first person to spring out of the stands was Principal Fulton. (Laughter.) The basketball team finished with a great record -- and along with all your other school teams, it has given this good town a lot to cheer about. 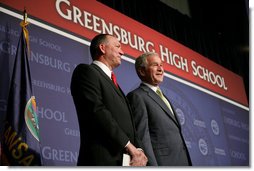 As the Class of 2008 ventures into the world, your hometown will always be a source of stability and comfort and pride. Greensburg is where many of your parents and grandparents grew up. It's where you went to church with your neighbors on Sundays. It's where you wanted home to be after the storm. So wherever you go, you will be able to rely on the ties of family, and your faith, and your friends that were forged here, and you'll always carry Greensburg, Kansas in your heart.

The Greensburg Class of 2008 has learned that Americans will always rebuild stronger and better than before. Often in life, you're dealt a hand that you did not expect. The test of a community -- and the test of an individual -- is how you play the hand. Over the past seven years, I've seen Americans in communities across our country overcome some tough hands. I've seen the resolve of the American spirit in the wake of the terrorist attacks of 9/11, the flood waters of Hurricane Katrina, eight hurricanes in Florida, tornadoes in states like Missouri, Tennessee, and Alabama, wildfires of southern California and in Oregon. I saw the same resolve and the same determination in the people of Greensburg, Kansas.

When I visited Greensburg last year, I remember walking your streets, and I remember meeting Kaye Hardinger. She was standing outside the wreckage of her home. She took a look at me and said, "I would have invited you in for coffee," but she didn't have time to dust. (Laughter.) Today, Kaye lives in a trailer with her family in a nearby town. But she continues to plan for the day when she and her family move back to Greensburg, and rebuild. And Kaye, when that day comes, fire up the coffee pot. (Laughter.)

When I visited Greensburg I also met a man named Kelly Estes. Kelly is a John Deere dealer. I remember so very well walking with Kelly and his wife and his family through the rubble after that storm hit. He lost more than $18 million worth of equipment. But he was ready to look for the future. After caring for his employees who had lost their homes, he began making plans to bring his business back to Greensburg. Earlier this year, he broke ground on a new dealership that will be a model of energy efficiency, create more than two dozen new jobs and inject new vitality into Greensburg economy. 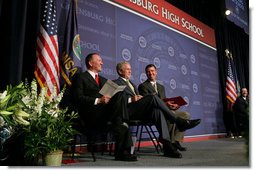 People like Kaye and Kelly are part of a more hopeful future for your city. The leaders of your town understand that out of the devastation of the storm comes an opportunity to rebuild with a free hand and a clean slate. They envision a future where new jobs flourish, where every public building meets the highest environmental standards, and where the beauty of rural America meets the great possibilities of new technology. The community is dedicated to putting the "green" in Greensburg. (Applause.) And as you work to achieve this vision, the federal government will honor its commitments, and continue to stand by you.

Ultimately, the future of Greensburg -- and the future of our nation -- will belong to the young. The education that you've received at this school will prepare you for a lifetime of opportunity and achievement. And the lessons that you have learned in this town will give you the strength to rise above any obstacle in your path. You've seen life at its most difficult. You have emerged stronger from it. Now I call on you to take this spirit forward -- and help our country in a way that makes us more resilient and more courageous as a people.

And finally, the Greensburg Class of 2008 also understands what it means to serve a higher cause. In the hours after the storm, your concern was not for what you'd lost; it was for the safety of the people you loved. As Senior Class President Jarrett Schaef said, he'd look for his friends in the dark of night. And I appreciate that kind of leadership. When someone suggested that he leave town, he refused. Here is what he said: "I hadn't found nearly enough of my friends, and I wasn't going to leave until I had."

Jarrett wasn't alone that night. As you well know, many of your family members rushed to Greenburg [sic] from nearby counties and other states to offer love and support. Other folks came from towns, as well -- compassionate citizens who came to do their duty to help a neighbor in need.

You'll always remember these generous and caring souls. And you will always remember the thousands of other volunteers who descended upon Greensburg in the months that followed. The volunteers came from all across America. One of them was a student named Christopher Skrzypczak. Last year, Christopher almost lost his life when a tornado tore through his high school in Enterprise, Alabama. So when he saw the news reports about Greensburg, he wanted to help. He raised money to purchase hundreds of new books for your library. He drove with his family all the way from Enterprise to Greensburg to deliver the books in person. Volunteers like Christopher brought hope to this community -- and they set an inspiring example for our country. 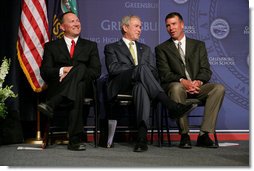 Over the past year, students in Greensburg have also answered the call to serve others. Despite all that you lost, each of you has discovered that you have far more to give. Over the summer, many of you worked with AmeriCorps to clear debris and help the needy. On Greensburg Make a Difference Day, you helped plant new trees and flowers in the parks. When a tornado hit Jackson, Tennessee in February, elementary and middle school students worked with their teachers to raise more than $5,000 in aid for the victims. In these acts of service, we are reminded that as much as Greensburg changes, the compassion of its citizens is a constant source of strength.

One member of your class who represents the spirit of service is Aaron Widner. This fall, Aaron decided to enlist in the Marine Corps. Like many other courageous young men and women across America, he has stepped forward to defend our freedom during a time of war -- and we honor him today. And, Aaron, I wish you the best of luck at boot camp -- and I look forward to serving as your Commander-in-Chief. (Applause.)

On this graduation day, I ask every member of your class to devote your lives to a cause larger than yourselves. Over the past year you've learned that you can never predict what tomorrow will bring. Wherever the winds of life take you, you can be certain that serving others will always make your lives more fulfilling.

As we watch the Class of 2008 graduate today, the dark clouds from one year ago have parted and have made way for a brighter future. We'll always hold in our hearts those who lost their lives. But with faith in He who rides above the mighty storm, we go forth with confidence that Greensburg will rise again. (Applause.)

I thank you for having me today. God bless you, and may God bless the Class of 2008. Thank you. (Applause.) 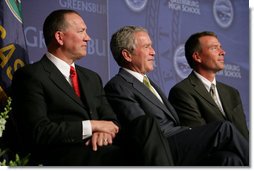 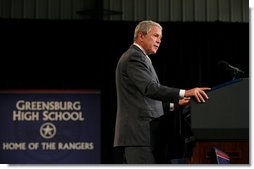 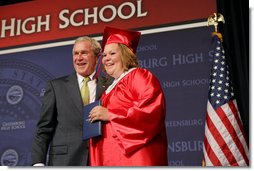 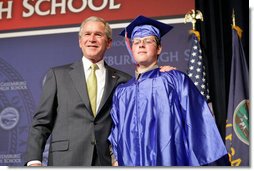