For Immediate Release
Office of the Press Secretary
April 9, 2008

THE PRESIDENT: Thanks for coming. I'm about to sign a piece of legislation that will help give prisoners across America a second chance for a better life. This bill is going to support the caring men and women who help America's prisoners find renewal and hope.

I can't thank the folks who care enough about a fellow citizen to offer their love and compassion. It's through the acts of mercy that compassionate Americans are making the nation a more hopeful place, and I want to thank you all for joining us today.

THE PRESIDENT: -- but of Foreign Relations; but a key member of the Judiciary Committee, Senator Sam Brownback, as well. So we've got three United States senators here and I'm honored they are here. Members of the United States Congress: Chairman of the House Judiciary, John Conyers, and ranking member Lamar Smith. I want to thank you all for coming.

I appreciate very much Danny Davis joining us, as well -- bill sponsor. I want to thank Jim Sensenbrenner and Bobby Scott and Howard Coble and Chris Cannon. All good members and all members who worked hard to get this piece of legislation here in a timely fashion.

I thank the Attorney General, Judge Michael Mukasey, for joining us, as well; Elaine Chao, thank you for coming, Madam Secretary; Rob Portman, former Director of the OMB; and all the supporters of the Second Chance legislation. Thanks for caring about your country, thanks for working on this piece of legislation.

The country was built on the belief that each human being has limitless potential and worth. Everybody matters. We believe that even those who have struggled with a dark past can find brighter days ahead. One way we act on that belief is by helping former prisoners who've paid for their crimes -- we help them build new lives as productive members of our society.

The work of redemption reflects our values. It also reflects our national interests. Each year, approximately 650,000 prisoners are released from jail. Unfortunately, an estimated two-thirds of them are rearrested within three years. The high recidivism rate places a huge financial burden on taxpayers, it deprives our labor force of productive workers, and it deprives families of their daughters and sons, and husbands and wives, and moms and dads. 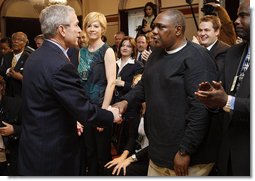 Our government has a responsibility to help prisoners to return as contributing members of their community. But this does not mean that the government has all the answers. Some of the most important work to help ex-convicts is done outside of Washington, D.C., in faith-based communities and community-based groups. It's done on streets and small town community centers. It's done in churches and synagogues and temples and mosques.

I like to call the folks who are engaged in this compassionate work, "members of the armies of compassion." They help addicts and users break the chains of addiction. They help former prisoners find a ride to work and a meal to eat and place to stay. These men and women are answering the call to love their neighbors as they'd like to be loved themselves. And in the process, they're helping prisoners replace anger and suffering and despair with faith and hope and love.

The bill I'm signing today, the Second Chance Act of 2007, will build on work to help prisoners reclaim their lives. In other words, it basically says: We're standing with you, not against you.

First, the act will authorize important parts of the administration's Prison Re-entry Initiative. The goal of this initiative is to help America's prisoners by expanding job training and placement services, improving their ability to find transitional housing, and helping newly released prisoners get mentoring, including from faith-based groups.

The past three years, congressional appropriations have supported the work in 20 states through a series of pilot programs awarded to community and faith-based organizations by the U.S. Department of Labor. The early efforts have fielded promising results. In the first two years of the program, more than 12,800 offenders have enrolled in the prisoner re-entry program. More 7,900 have been placed in jobs. Only 18 percent of those enrolled in the program have been arrested again within a year -- that's less than half the national average. We like to measure results, and the results of these pilot programs are very encouraging.

With the legislation I'll sign today, Congress has recognized the success of this good policy, and I thank them for their good work. Secondly, the act will support the Justice Department's ongoing work to help our nation's prisoners. This bill will help state and local governments, and Indian tribes, and non-profit groups implement programs that will improve the prisoner re-entry process.

These programs will provide further -- former prisoners with essential services, like housing and medical care. It will help develop prisoner drug treatment programs; support prisoner mentoring initiatives. It will support family counseling and other services to help prisoners re-establish their place in the community.

In both these ways, the Second Chance Act will live up to its name; will help ensure that where the prisoner's spirit is willing, the community's resources are available. It will help our armies of compassion use their healing touch so lost souls can rediscover their dignity and sense of purpose.

I recently went to a program in Baltimore, Maryland, called Jericho. I met a man there who has kindly joined us today named Thomas Boyd. He's 53 years old. He spent more than 20 years of his life using drugs and going back and forth to jail. He remembers the day when his daughter sat down, looked him in the eye and said, "Daddy, I think it's time for you to start doing something with your life."

He took his daughter's advice. He sought out the Jericho re-entry program, which is supported by the Re-entry Initiative. When I visited the program, I tried to remind them that the least shall be first. I also reminded him I was a product of a faith-based program. I quit drinking -- and it wasn't because of a government program. It required a little more powerful force than a government program in my case.

And he told me that he appreciates the love and compassion he felt -- feels on a regular basis. He's working, back with his family; he's a good guy. And I want to thank you for coming, Thomas. (Applause.)

And now it is my honor to sign this important piece of legislation. May God bless the country, and may God bless those who are trying to help. Thank you very much. (Applause.)