For Immediate Release
Office of the Press Secretary
November 7, 2005

PRESIDENT TORRIJOS: (As translated.) A very good morning, esteemed journalists. I'm pleased to welcome the President of the United States to Panama.

On this rainy morning, we've had a work meeting with President Bush and we've had the opportunity to exchange viewpoints on various subjects of interest to Panama, as well as of interest to the United States. We've discussed the advantages and opportunities offered by free trade and we've reviewed our agenda, starting with past April's visit when I had the opportunity to visit President Bush in Washington. 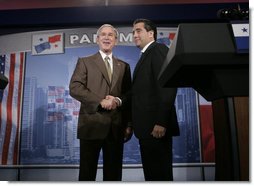 Panama has had a special relationship with the United States throughout the various stages of its history, and the President and I are committed to maintain and strengthen this through dialogue and through an open relationship such as we have had so far. There will not always be agreement, such as in the unexploded ordnance issue, but there will always be a frankness, sincerity between us so that we can discuss as friends on the various viewpoints of our countries.

In a few moments I'll have the opportunity to take President Bush to the Miraflores Locks. The first time a sitting U.S. President left the United States, he did so to observe the construction of the Panama Canal. And today, the President of the United States, George W. Bush, will have the opportunity to see how we Panamanians feel proud not only of the process of reversion of the Panama Canal from U.S. to Panamanian hands, but we also feel proud of the way the Canal is being managed and of the opportunities that it will offer into the future.

Welcome, Mr. President. And we will now offer an opportunity for press from both sides to ask a couple of questions.

PRESIDENT BUSH: -- I look forward to going to the Panama Canal. I am most impressed by the management of the Canal. Those who are responsible for the Panama Canal have done an excellent job, and this is beneficial to the world. And I congratulate you for that. And I'm really looking forward to seeing it.

We had a very good discussion, and it's important we have discussions, because we're friends. And one of the matters we discussed was, how do we work together to improve the lives of our respective citizens? And one way is through trade. We're in the midst of negotiating a free trade agreement with Panama. And I told the President this free trade agreement is important for America, as he told me it's important for Panama. And we're close to coming to an agreement, and we'll continue to work on that agreement for the good of our respective peoples.

I also told him that I was pleased with the leadership of Panama and Argentina. Twenty-nine nations said, loud and clear, it's important for us to continue to advance a trade agenda that is positive for the people of this hemisphere. And I appreciated your government's stance on that, Mr. President. You're acting in the interest of your people. 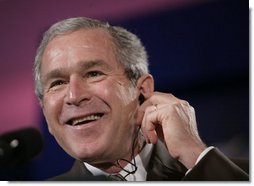 And speaking about the interest of the people, I do want to say something about the tornados that recently hit America. I had the -- I called the Governor of Indiana this morning and expressed my deepest condolences for the families who lost lives. I asked him if there was more federal response needed. He felt like the response that we had given was appropriate at the time. And many Americans are now asking God's blessings on those who suffered through this natural disaster.

Mr. President, I'm fully aware that 25,000 of our citizens live in your beautiful country. I can see why: It is a beautiful country. Panama City is a modern, progressive, city, and your government is a modern, progressive government. I congratulate you for your fiscal reforms. I congratulate you for the strong growth of your economy. I appreciate your transparency. I appreciate your strong commitment to fighting corruption. It sends a clear signal not only to the people of this important country, but also to people throughout the region. And it's noble, and it's important that you continue, which I know you will, your very strong leadership.

I look forward to continuing to discuss ways for us to fight narco-trafficking. You've been strong in that. And that's important for our hemisphere, not to allow the narco-traffickers and narco-terrorists to be able to threaten the stability of democracies. I also appreciate your strong commitment to democracy, itself: rule of law, and freedom to worship, freedom of the press, the ability for governments to be transparent, and governments to have checks and balances so that we deal with the rule of law, not the rule of man. And it's your example, which is an important example for others to see.

And again, I want to thank you very much for your leadership. I also thank you very much for helping another part of the world become free and democratic, and that's in Iraq. And I appreciate the supervisors that you sent to help monitor the elections, to see to it that those -- the vote on the constitution is free and fair. And I congratulate you for that. It's an important gesture, recognizing that -- a gesture that recognizes that freedom is universal in its application, and that democracy is the best way to lay the groundwork for peace.

And I finally want to thank you very much for the condolences and offers of assistance you gave to our people after Hurricane Katrina. You're, indeed, a good friend, and I'm proud to be here to confirm that friendship.

PRESIDENT TORRIJOS: We would at this time open the floor to two questions per side for the journalist group.

Q Good morning. You discussed the free trade agreement. There's been some remarks, Mr. President, in regard that your support in Congress has lessened and that the CAFTA was approved by a very narrow margin. What are the real probabilities of getting support in Congress for the ratification of a free trade agreement between Panama and the United States?

And there's also concern in Panama regarding the subject of the unexploded ordinance in areas contaminated in Emperador, San Jos , et cetera, and the commitment from the United States as to whether those areas can be decontaminated.

PRESIDENT BUSH: Let me start with the chances of getting an agreement passed. The first step is to get the agreement done, and we're getting close. And I -- we talked to Trade Minister Portman yesterday on the way here to Panama. He understands how -- the importance that plays -- the priority that plays on this agreement. And we just got to continue to work it and get it done.

Secondly, we're going to have to work the Congress. We talked about working the Congress. It's -- I'll do my best to work in the Congress, and the Panamanian government understands that once we get an agreement, that ministers and friends and allies of Panama will go work the Congress. And one area that we need to make progress on is with the Democrat Party. The Democrat Party is a free -- for many sessions was a free trade party. Not totally, but they had -- let me rephrase that -- the Democrat Party had free trade members who are willing to make the right decisions based not on politics, but based on what's best for the interest of the country. And that spirit has dissipated in recent votes, and Panama can help reinvigorate the spirit. We can help to make sure this isn't just such a partisan issue, that people are unwilling to make a vote based upon their principle and what's right for our respective countries.

Secondly, we had obligations under the treaty, and we felt like we met those obligations. There is a difference of opinion. And so we have a disagreement that we will continue to discuss. And we're able to do so in a way that I think is constructive because we're friends.

Q "We will ask not only what is legal, but what is right; not what the lawyers allow, but what the public deserves." In the CIA leak case, has your administration lived up to this campaign promise?

Q In the CIA leak case, has your administration lived up to this campaign promise?

PRESIDENT BUSH: Oh, Deb, look, I said the other day to the press corps that was assembled in Argentina that there's still an ongoing investigation. We take this investigation very seriously, and we'll continue to cooperate during the investigation.

Q Thank you, Mr. President. President Bush, how would the United States look upon mainland China's participation in the subject of the widening of the Panama Canal? And would this participation affect interests of the United States? And on the other hand, in the recent FTAA summit held in South America, there were deep divisions, and what do you feel these deep divisions are all about, these ideological issues among the countries of MERCOSUR?

PRESIDENT BUSH: First let me start with the Panama Canal. I think it wise for the government to consider modernizing the Canal. Things have changed since the Canal was first built and there needs to be a continued appraisal of the Canal to make sure that it is -- it's used. It's in our nation's interest that this Canal be modernized. And so I -- we didn't discuss the financing mechanisms, but I'm confident that however the widening is -- the modernization is financed, that the government and the -- those authorities over the Canal recognize that it is to be used by everybody, that the Canal is international, that there ought to be equal access. It's in the interest of those who run the Canal not only to modernize it, but to make sure it's used properly.

At the FTAA, 29 countries -- I mean, at the summit on the FTAA, 29 countries said, let's make sure in 2006 we continue discussing a way forward for the FTAA -- 29 of the 34 countries. There was a strong approval for the concept of working together to put agreements in place that will enable us to compete with China in the long run, for example. And so I found the spirit for free trade to be strong. There was five nations that said, well, we don't want to do it as soon as 2006. On the other hand, I went to Brazil yesterday, and there was strong agreement in Brazil that we work together to advance the Doha Round of the WTO.

The impression I came away with, which is an accurate impression, is that there's a lot of people who recognize -- by far, the vast majority of countries recognize it's in our nations' interests to advance the trade agenda.

Q Mr. President, there has been a bit of an international outcry over reports of secret U.S. prisons in Europe for terrorism suspects. Will you let the Red Cross have access to them? And do you agree with Vice President Cheney that the CIA should be exempt from legislation to ban torture?

And, therefore, we're working with Congress to make sure that as we go forward, we make it possible -- more possible to do our job. There's an enemy that lurks and plots and plans, and wants to hurt America again. And so, you bet, we'll aggressively pursue them. But we will do so under the law. And that's why you're seeing members of my administration go and brief the Congress. We want to work together in this matter. We -- all of us have an obligation, and it's a solemn obligation and a solemn responsibility. And I'm confident that when people see the facts, that they'll recognize that we've -- they've got more work to do, and that we must protect ourselves in a way that is lawful.