For Immediate Release
Office of the Press Secretary
January 5, 2009

PRESIDENT BUSH: I'm proud to be meeting again with the Vice President of Sudan. He's a friend of mine. He is a strong leader who's dealing with a very difficult situation.

We talked about two important subjects. One is the North-South agreement. It's a vital agreement, and it's going to be very important for the United States to pay attention to the implementation of this agreement. And the Vice President brought me up to date on what has been accomplished and what still remains to be accomplished. 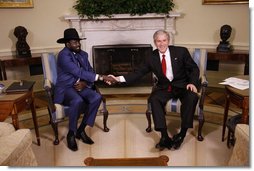 And I thank you for, one, your clear briefing, but also your leadership on this important issue.

And then the Vice President and I discussed Darfur. And he has taken the lead in helping the rebels come together so that there would be a more unified voice in negotiating a -- hopefully negotiating a peace with the Bashir government.

So I want to thank you very much for coming back. It's good to be with you. He asked me whether or not I was going to still care about Sudan -- after all, the North-South agreement was negotiated under my watch -- and my answer is, absolutely, Mr. Vice President.

Finally, I've been -- Secretary Rice was just here, and prior to the Vice President's arrival we did talk about Gaza. I've been closely monitoring the situation in Gaza. I understand Israel's desire to protect itself, and that the situation now taking place in Gaza was caused by Hamas. Instead of caring about the people of Gaza, Hamas decided to use Gaza to launch rockets to kill innocent Israelis. And Israel has obviously decided to protect herself and her people.

The United States is concerned about the humanitarian crisis. We care about the people of Gaza, and, therefore, have provided millions of dollars of fresh aid to the United Nations to help.

And finally, all of us, of course, would like to see violence stopped -- but not at the expense of an agreement that does not prevent the crisis from happening again. I know people are saying let's have that cease-fire, and those are noble ambitions. But any cease-fire must have the conditions in it so that Hamas does not use Gaza as a place from which to launch rockets.

There are many hopeful signs in the Middle East. Democracy is taking hold in parts of the world in the Middle East. But the Hamas reminds us that there are people who are willing to kill innocent people to stop the advance of free societies. And the challenge for those of us who long for peace, Mr. Vice President, is to recognize the realities of the world, recognize we're in the midst of an ideological conflict, and work with the agents of peace.

I am still hopeful that some day there will be a Palestinian state living side by side with Israel in peace. I believe the Palestinian Authority under President Abbas has got the capacity and the foresight and the vision necessary to see that become a reality. In the meantime, all of us are going to have to deal with Hamas -- those who threaten peace, those who want to deny the existence of a peaceful Palestinian state.

And so I welcome you, Mr. Vice President. Thank you for coming.

I told the Vice President his hat made me feel very much at home. (Laughter.)

VICE PRESIDENT KIIR: Your Excellency, thank you very, very much again and we are happy to be in the White House today. And I discussed with His Excellency the President the issues that he has raised, but mostly we came here to thank him and his administration for the commitment they have shown to the people of Sudan to bring peace and continue to monitor that peace which ended the 21-year war. And that peace will remain in his record, that he was the only one who was able to continue monitoring the peace, negotiating it, until it was signed.

This peace is now in existence. And we came to thank him and the whole administration, and wish him the best of his life in his private mission that he's now going to take up after the assignment in the White House.

We have also told His Excellency the President that the people of Southern Sudan, the people of the marginalization in the whole Sudan, will never forget him for all that he has done for them. And the people in Darfur, in particular, will still be looking forward to seeing to it that peace is brought to Darfur. It is a joint mission that we have taken upon ourselves together with them that we have to bring peace to Darfur, the way we have brought peace to Southern Sudan.

We also talked of the issue of the LRA -- that is the Lord's Resistance Army in Northern Uganda, which has now shifted to Congo and Southern Sudan -- and how to handle this. This is the terrorist of the -- (inaudible) -- that does not have any respect of human rights. And we'll have to deal with it so that they have to accept the regional changes that are happening and to be brought to end of conflict.

So this is in brief that I came to the White House, to pass to His Excellency the President of the United States of America, and to keep Sudan very close to his heart, even if he becomes a private citizen in this country, because he has a role to play. And we came to pass him also our Christmas and New Year's greeting, to see if you have enjoyed your Christmas.