THE PRESIDENT: Good morning. For years, America's automakers have faced serious challenges -- burdensome costs, a shrinking share of the market, and declining profits. In recent months, the global financial crisis has made these challenges even more severe. Now some U.S. auto executives say that their companies are nearing collapse -- and that the only way they can buy time to restructure is with help from the federal government. 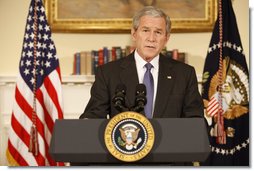 Addressing the challenges in the auto industry requires us to balance these two responsibilities. If we were to allow the free market to take its course now, it would almost certainly lead to disorderly bankruptcy and liquidation for the automakers. Under ordinary economic circumstances, I would say this is the price that failed companies must pay -- and I would not favor intervening to prevent the automakers from going out of business.

But these are not ordinary circumstances. In the midst of a financial crisis and a recession, allowing the U.S. auto industry to collapse is not a responsible course of action. The question is how we can best give it a chance to succeed. Some argue the wisest path is to allow the auto companies to reorganize through Chapter 11 provisions of our bankruptcy laws -- and provide federal loans to keep them operating while they try to restructure under the supervision of a bankruptcy court. But given the current state of the auto industry and the economy, Chapter 11 is unlikely to work for American automakers at this time.

American consumers understand why: If you hear that a car company is suddenly going into bankruptcy, you worry that parts and servicing will not be available, and you question the value of your warranty. And with consumers hesitant to buy new cars from struggling automakers, it would be more difficult for auto companies to recover.

Additionally, the financial crisis brought the auto companies to the brink of bankruptcy much faster than they could have anticipated -- and they have not made the legal and financial preparations necessary to carry out an orderly bankruptcy proceeding that could lead to a successful restructuring.

The convergence of these factors means there's too great a risk that bankruptcy now would lead to a disorderly liquidation of American auto companies. My economic advisors believe that such a collapse would deal an unacceptably painful blow to hardworking Americans far beyond the auto industry. It would worsen a weak job market and exacerbate the financial crisis. It could send our suffering economy into a deeper and longer recession. And it would leave the next President to confront the demise of a major American industry in his first days of office.

A more responsible option is to give the auto companies an incentive to restructure outside of bankruptcy -- and a brief window in which to do it. And that is why my administration worked with Congress on a bill to provide automakers with loans to stave off bankruptcy while they develop plans for viability. This legislation earned bipartisan support from majorities in both houses of Congress.

Unfortunately, despite extensive debate and agreement that we should prevent disorderly bankruptcies in the American auto industry, Congress was unable to get a bill to my desk before adjourning this year.

This means the only way to avoid a collapse of the U.S. auto industry is for the executive branch to step in. The American people want the auto companies to succeed, and so do I. So today, I'm announcing that the federal government will grant loans to auto companies under conditions similar to those Congress considered last week.

These loans will provide help in two ways. First, they will give automakers three months to put in place plans to restructure into viable companies -- which we believe they are capable of doing. Second, if restructuring cannot be accomplished outside of bankruptcy, the loans will provide time for companies to make the legal and financial preparations necessary for an orderly Chapter 11 process that offers a better prospect of long-term success -- and gives consumers confidence that they can continue to buy American cars.

Because Congress failed to make funds available for these loans, the plan I'm announcing today will be drawn from the financial rescue package Congress approved earlier this fall. The terms of the loans will require auto companies to demonstrate how they would become viable. They must pay back all their loans to the government, and show that their firms can earn a profit and achieve a positive net worth. This restructuring will require meaningful concessions from all involved in the auto industry -- management, labor unions, creditors, bondholders, dealers, and suppliers.

In particular, automakers must meet conditions that experts agree are necessary for long-term viability -- including putting their retirement plans on a sustainable footing, persuading bondholders to convert their debt into capital the companies need to address immediate financial shortfalls, and making their compensation competitive with foreign automakers who have major operations in the United States. If a company fails to come up with a viable plan by March 31st, it will be required to repay its federal loans.

The automakers and unions must understand what is at stake, and make hard decisions necessary to reform, These conditions send a clear message to everyone involved in the future of American automakers: The time to make the hard decisions to become viable is now -- or the only option will be bankruptcy.

The actions I'm announcing today represent a step that we wish were not necessary. But given the situation, it is the most effective and responsible way to address this challenge facing our nation. By giving the auto companies a chance to restructure, we will shield the American people from a harsh economic blow at a vulnerable time. And we will give American workers an opportunity to show the world once again they can meet challenges with ingenuity and determination, and bounce back from tough times, and emerge stronger than before.