For Immediate Release
Office of the Press Secretary
December 19, 2008

PRESIDENT BUSH: Mr. President, I'm thinking about the first time I met you -- I think it was in Jordan. And I can't help but reflect on how far the process has come to bring peace to the Holy Land.

You have done a lot of important and hard work in helping the region understand the importance of two states living side by side in peace. No question this is a hard challenge, but nevertheless, people must recognize that we have made a good deal of progress. And a lot of it has to do with your leadership, and I thank you. 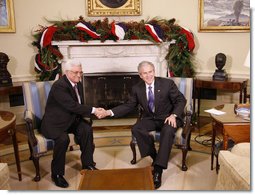 I was pleased to note that the U.N. Security Council passed a resolution which confirms that the bilateral negotiation process is irreversible, is -- and it's a path to a Palestinian state and a path to peace in the Middle East.

And I've been looking forward to this visit. I'm looking forward to getting a briefing on not only the negotiations and the discussions you've had with Israel, but also the fine progress that's being made on the West Bank, which is a credit to your leadership and the leadership of the Prime Minister.

So welcome, sir, and thank you for coming.

PRESIDENT ABBAS: (As translated.) Thank you very much, Mr. President, and thank you for finding the time to meet with us during these days. There is no doubt that we will always remember the efforts that you have undertook to promote the peace process. You were the first sitting President who accepted as a policy the establishment of two states -- a state of Israel and a state of Palestine -- living next to each other in peace and security. And this policy has became a reality around the world.

And we also remember very fondly, Mr. President, the great efforts that you have undertook to convene the Annapolis Conference, after so many years of absent peace process attempts. This conference was attended by representatives from more than 50 countries from around the world, and made it a reality that the road map would be the way to go.

Now, also the Annapolis Conference talked about and promoted the bilateral direct negotiations between the Israelis and the Palestinians over the fundamental and basic issues. These basic issues, as we all know, include Jerusalem, settlements, borders, refugees, water, security, as well as prisoners. And of course, you pushed very hard for the two sides to carry out their commitments based on phase one of the road map, and to carry out their responsibilities. And you were clear about both Palestinian commitments, as well as Israeli commitments.

On the basis of your efforts, and the convening of the Annapolis Conference, two other conferences took place -- the Paris and the Berlin Conferences. And during the Paris Conference, there was an agreement to support financially in a very generous way the Palestinian Authority. After that, we have seen on the ground that the West Bank was much calmer, and there was performance on security throughout that part of Palestine. And we also appreciate the efforts that were given to us in the area of security, which helped our own security apparatus to carry out their responsibilities.

Some might say that all these efforts perhaps went in vain. I happen to disagree. I believe that they have cemented the real principles that carried out the peace process and the negotiations forward. And here I have also to mention the Arab League peace initiative to promote peace, which is actually published today in a number of newspapers, including American newspapers today. And the purpose of this also coincides to cement your vision of two states, as well as the principle of land for peace.

We are here today, Mr. President, in order to express our appreciation for your efforts, and we know very well that we would not have been able to go that far in our work without your support and promotion of the peace process.

I would also like to take the opportunity to thank members of your own administration -- Secretary Rice, as well as Mr. Hadley -- those people who worked with us tirelessly.