For Immediate Release
Office of the Press Secretary
December 16, 2008

We've had a very good discussion. First I want to thank you for your support of freedom in Iraq. You have been steadfast in recognizing that freedom is the way to help build lasting peace. 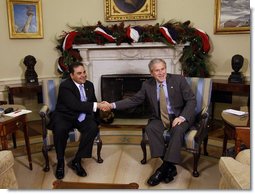 I appreciate very much the fact that your country is a vibrant democracy. You've been steadfast in your support for your -- the right of your people to express themselves in a free society, and I applaud you for that strength.

I want to thank you very much for investing in your people. You're a -- we've got a partnership through the Millennium Challenge Corporation. And part of your commitment was honest government and the investment in the health and education of your people. And you've honored that agreement. I thank you very much for understanding that the benefits of trade are good for your people and our people, as well. And you're a very strong advocate of CAFTA, which is working very well.

And finally, you've been very strong when it comes to helping interdict the flow of drugs. I explained to the President that since 2001, drug use in the United States amongst teenagers has declined by 25 percent. And the reason I said that is because in order to affect the flow of drugs there must be a comprehensive approach. First of all, we got to -- we in the United States must reduce demand. But it also requires a strong cooperative spirit to interdict supply. And you have been very strong in that.

And so I thank you. It's been a pleasure to work with you. You may have heard that I'm about to retire. And as I head toward the great state of Texas, I will have very fond memories of our time together, and the strength of our friendship and of your leadership.

PRESIDENT SACA: (As translated.) Thank you so much. I also thank President Bush. I think we have got a very good relationship and one that is very concerned for our people. I think that El Salvador is a good example of a country that moved from war to peace. And we've always had the contribution of the United States in all of the stages of this peace.

I always tell President Bush that free trade was so important, as well as the immigration issue for our people. And all these issues have been worked out, especially regarding cooperation with regards to the combat in drugs. I have confirmed to President Bush that El Salvador is going to renew the FOL that we have at the Pacific coast. And that has allowed us to capture a lot of drug traffickers and seize a lot of drugs also for the Pacific coast.

So a mid-income country like El Salvador knows perfectly well that the path towards prosperity is effort and hard work -- and freedom. And this is something that Salvadorans practice on a daily basis. We have worked hand in hand with ILEA. And ILEA is the place where our judges and our prosecutors are being trained, and it is something that we're doing together with the United States of America.

With regards to the Millennium Account, we have been very successful. We're working very fast. We're going to build a highway, a 300-kilometer-long highway in the northern part of the country. And at the same time, we're going to develop the rural areas along that highway. And all this has been done hand in hand with the United States.

I wish you the best of luck in your new life. I was just in Dallas because I went to promote the TPS for our people. And everybody knew there that President Bush was going to move to Dallas. (Laughter.)

You are leaving on January 20th. And I leave on the 1st of June.

PRESIDENT SACA: I hope that I can go and visit you and talk to you --

PRESIDENT SACA: Okay. President Bush has been a strong advocate of freedom. And I think that the United States has much to thank President Bush, especially the fact that the U.S. has not been attacked again by the terrorist groups. This is something quite intangible, because you cannot touch it, you cannot feel it, until when, unfortunately, something like that would happen again.

Thank you so much.