For Immediate Release
Office of the Press Secretary
December 15, 2008

Holidays at the White House 2008

THE PRESIDENT: Please be seated. Welcome to the White House. You may have heard I've had a pretty eventful weekend. (Laughter.)

So I slipped out Saturday night to Andrews Air Force Base, boarded Air Force One, and landed in Baghdad, Iraq, on Sunday afternoon. It was an unbelievable experience, it really was, to stand next to the President of a democracy and hold my hand over my heart as they played the national anthem in front of one of Saddam Hussein's palaces. I then had -- (applause) -- and then I had the honor to thank our brave troops who have helped make the transformation in Iraq possible. 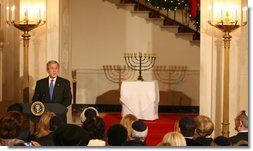 This morning we landed in Afghanistan. I spoke to American forces serving courageously to make sure that Afghanistan never becomes a safe haven from which the killers could launch attacks on the homeland.

And then I met with President Karzai, who is determined to help the young democracy survive. And so he said, why don't you hang around for a while? And I said, well, you don't understand. (Laughter.) I need to get back to the White House for an important event. (Laughter.) The Hanukkah reception is always one of the most special events of the season. Laura and I are pleased to be with so many friends. And we are honored to gather with leaders of the Jewish community to celebrate our final Hanukkah here in the White House.

I want to thank our Attorney General for joining us. General, I appreciate you and Susan joining us. I am proud to be here with one of America's great United States senators, Joe Lieberman -- (applause) -- his greatness made possible by his wife Hadassah, I might add. (Laughter.) And one of the young leaders of the United States Congress, Eric Cantor, and his wife Diana. (Applause.) And we're proud to be here with Kol Zimra, as well, who will perform later.

The story of Hanukkah recalls the miraculous victory of a small band of patriots against tyranny, and the oil that burned for eight nights. Through centuries of exile and persecution, Jews have lit the menorah. Each year, they behold its glow with faith in the power of God, and love for His greatest gift -- freedom.

This Hanukkah we celebrate another miraculous victory -- the 60th anniversary of the founding of the state of Israel. When President Harry Truman led the world in recognizing Israel in May of 1948, many wondered whether the small nation could possibly survive. Yet from the first days of independence, the people of Israel defied dire predictions. With determination and hard work, they turned a rocky desert into fertile soil. They built a thriving democracy, a strong economy, and one of the mightiest military forces on earth. Like the Maccabees, Israel has defended itself bravely against enemies seeking its destruction. And today, Israel is a light unto the nations -- and one of America's closest friends. 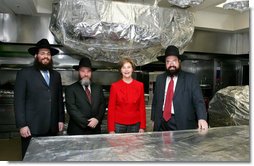 This evening, we have the great privilege of celebrating Israel's 60th anniversary and Hanukkah in a very special way. Thanks to the generosity of the Truman Library, we are fortunate to light the menorah presented to President Truman in 1951 as a symbol of friendship by Israel's first prime minister, David Ben-Gurion.

And so tonight I'm deeply moved to welcome the grandsons of these two great men -- Clifton Truman Daniel and Yariv Ben-Eliezer -- to light the Truman menorah together.

Laura and I wish all the people of Jewish faith a happy Hanukkah and many joyous Hanukkahs in the years ahead. Thank you. (Applause.) 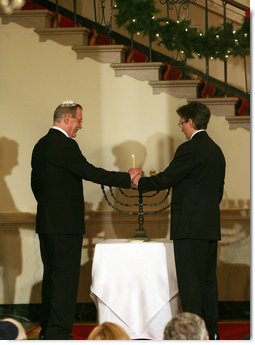