For Immediate Release
Office of the Press Secretary
November 25, 2008

In recent weeks, this post has been the scene of heartwarming family reunions. Many of you recently finished deployments to Iraq. You performed with courage and distinction on the front lines of the war on terror. You have returned on success. On behalf of a grateful nation, I'm proud to welcome home the "Bastogne" Brigade, the "Strike" Brigade, the "Rakkasan" Brigade -- (applause.) Job well done.

I want to thank General Townsend for his service. I'm proud to be with his wife, Melissa. I thank General Schloesser's wife, Patty. I appreciate Maria McConville. I want to thank Theresa Vail. These women represent the military families who have sacrificed just like our military has. On behalf of an incredibly grateful nation, I extend our heartfelt thanks and our respect to the military families here on Fort Campbell. (Applause.)

I appreciate all the local and state officials who are here today. I particularly want to point out one person -- Staff Sergeant John [sic] Forbess. I had the honor of meeting John [sic] at the base of Air Force One. He was severely wounded in a helicopter crash in Iraq in 2003. Yet, despite his wounds, he volunteers in the Fisher House.

I want to thank very much those who made this event happen. I mean, it's not easy to host the President. (Laughter.) Thanks for coming out. 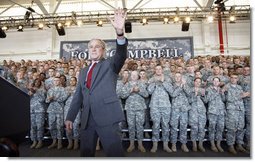 You know, we're getting ready to celebrate Thanksgiving. I'm looking forward to it. (Applause.) The day before my first Thanksgiving as your President, guess where I was.

THE PRESIDENT: Right here at Fort Campbell. (Applause.) For those of you who weren't here, I can only say that watching a bunch of Screaming Eagles tear into turkey is quite a sight. (Laughter.)

That Thanksgiving came shortly after the worst terrorist attack in our nation's history. The war in Afghanistan had just begun -- the "Rakkasans" were the first conventional brigade to join the battle. (Applause.) That November day, I said, "Once again, you have a Rendezvous With Destiny." And today, there is no doubt that you have upheld this motto -- you have done your duty, and you have defended the United States of America. (Applause.)

Over the past seven years, folks from this base have done exactly what they were trained to do. The Screaming Eagles, the Night Stalkers, the Fifth Special Forces Group have gone on the offense in the war against these killers and thugs. You have taken the battle of the terrorists overseas so we do not have to face them here in the United States. (Applause.) You have helped counter the hateful ideology of tyranny and terror with a more hopeful vision of justice and liberty. You're part of the great ideological struggle of our time. With the soldiers of Fort Campbell out front, the forces of freedom and liberty will prevail. (Applause.)

The war on terror, the war against people who would do us harm again, is being waged on two main fronts -- Afghanistan and Iraq. In Afghanistan, we removed an oppressive regime that harbored the terrorists who planned the attacks that killed 3,000 folks on September the 11th, 2001. Because of our men and women in uniform, more than 25 million Afghans are free. Afghanistan is a democracy, an ally in the war on terror. And as a result of your courage, the American people are safer.

In the recent weeks, the members of the "Thunder" Brigade have begun deploying to Afghanistan for a new mission. You will replace the "Wings of Destiny" Brigade -- and join a powerful coalition of forces, including the "Currahees," members of the "Life Liners." You'll join Major General Schloesser and his Division Headquarters. Together, you will help the people of Afghanistan defend their young democracy. Together, you will ensure that a noble goal is achieved -- that Afghanistan never again becomes a safe haven for those who want to plot and kill American citizens. 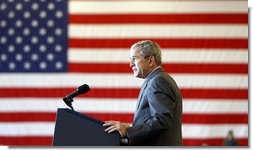 The other main front in the war on terror is Iraq. In that country, we removed a dictator who murdered his own people, paid the families of suicide bombers, who threatened America's security. As the regime crumbled, the dictator's sons tried to run and hide. They could not hide from the United States military. They met their fate in Mosul at the hands of the Screaming Eagles. (Applause.)

Because we acted, the dictator, his sons, and their regime are no more. More than 25 million Iraqis are free. And a young democracy has taken root where a tyrant once ruled. Removing Saddam Hussein was the right decision then -- and it is the right decision today. (Applause.)

With Saddam gone from power, our mission turned to helping the Iraqi people defend their freedom against violent extremists, including al Qaeda. In 2006, our efforts were faltering. So I reviewed our strategy and changed course. Instead of retreating, I ordered more troops into Iraq. And to lead the surge, I chose a former commanding general of the 101st Airborne -- the man formerly known as Eagle Six, General David Petraeus. (Applause.)

Our troops conducted this surge with resolve and with valor -- and nobody knows the impact better than the Screaming Eagles. When the "Bastogne" Brigade deployed to Salah al-Din last year, the province was still struggling to recover from the bombing of the famous Golden Mosque. But you partnered with the Iraqis to restore security. Schools and businesses are now open. The Golden Mosque is being rebuilt. Throughout the province, hope is returning; the terrorists are being driven out. The Iraqi people have the Screaming Eagles to thank.

Across Iraq, the surge has produced similar results. Since the surge began, violence and sectarian killings have fallen dramatically. Iraqi security forces have taken responsibility for 13 out of Iraq's 18 provinces. Slowly but steadily, economic and political progress is taking place. Iraqis are working together for a more hopeful future. 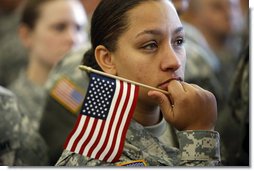 As conditions on the ground continue to improve, we will further reduce American combat forces in Iraq -- it's a strategy I call "return on success." So far, we've brought home a Marine Expeditionary Unit, two Marine battalions, six Army brigades without replacement -- including the Rakkasans. And by the end of January, we'll have brought home more than 4,000 additional troops.

As conditions on the ground continue to improve, we're also making progress toward completing a strategic framework agreement and a security agreement with the Iraqi government. These landmark agreements will pave the way for a future of economic and diplomatic and military cooperation between our two countries. Iraqi lawmakers in Baghdad are now debating these agreements through the democratic process. It's a good sign that Iraq has become a strong and vigorous democracy -- and it's a testament to the success of our men and women in uniform. The war in Iraq is not over. But we're drawing closer to the day when our troops can come home. And when they come home, they will come home in victory. (Applause.)

The work you have done and are going to do is historical work. You see, the consequences of success in Iraq will resonate far beyond that country's borders, and will resonate when your children and grandchildren begin to study the history of peace. Success will frustrate Iran's ambitions to dominate the region. Success will show millions across the Middle East that a future of liberty and democracy is possible. Success will deny al Qaida a safe haven for launching new attacks. Success in Iraq will mean that the American people are more secure at home.

In Iraq, Afghanistan, and beyond, our men and women in uniform have done everything we have asked of them and more. You've earned the thanks of every American.

You know, this is going to be my last Thanksgiving as President. Sometimes I am asked what I will miss most about the job. Well, above all, I'm going to miss spending time with men and women who have volunteered to serve the United States of America, the fine men and women who wear the uniform. We are blessed to have defenders of such character and courage. I'm grateful to the families who serve by your side. And I will always be thankful for the honor of having served as the Commander-in-Chief. (Applause.)

So Laura and I wish you and your families a safe and happy Thanksgiving. We join you in praying for our troops spending the holiday far from home. We pray for those who've been wounded in battle, and for all who love and care for them. We hold in our thoughts and prayers the brave men and women who have given their lives, and the families who mourn for them. We ask the Almighty to watch over everyone who puts on the uniform, and has volunteered to serve this great land. 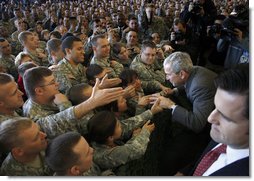 It's an honor to be with you today. May God bless you, and may God continue to bless the United States of America. (Applause.) 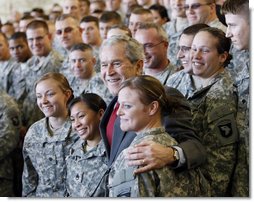 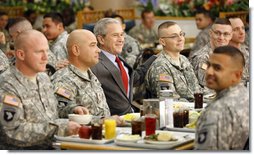