For Immediate Release
Office of the First Lady
November 18, 2008

MRS. BUSH: Thank you so much, Skyler. Thanks, everybody. I'm very happy to be here, and thank you, Skyler, for your excellent introduction. I'm delighted that boys and girls from Abraham Lincoln Elementary School are here with us today at the birthplace of America's 16th President.

Last February I was supposed to be here with you for the dedication of your school and then to come here to the memorial. But sadly, as you all remember, there was a ice storm that day, so a lot of visitors that were coming in from around the country couldn't come. But I'm so happy that I've had this chance to come today on a beautiful sun-shiny day. 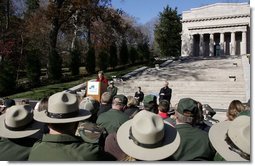 I want to also acknowledge Secretary Dirk Kempthorne from the U.S. Department of the Interior. Thank you, Secretary, for everything you've done for our country.

Libby O'Connell, who just spoke to you, the Chief Historian of the History Channel, A&E Television -- I also -- this gives me a chance to tell everyone to be sure and watch the night before Thanksgiving next week on Wednesday night -- the History Channel is going to run a show on the White House. And so if you watch that show, you can see all the Lincoln furniture. You can see the room that we now call the Lincoln Bedroom that was Lincoln's office when he lived at the White House. We live in the same house Lincoln lived in, and you can imagine what a thrill that is for President Bush and me.

I also want to thank all the state and local officials who have joined me today -- the mayor, the state senator, state representative, and secretary of state. Thank you so much for everything you do for your state and for joining me now.

Mr. Lincoln, thank you also for joining us. Thanks a lot for coming.

Each year, millions of visitors to Washington, D.C. are awed by a striking monument -- the Lincoln Memorial. This temple stands as a symbol of freedom and inspiration for residents and tourists alike. It's a memorial to President Lincoln's memory, and it's surrounded by 36 columns which represent the 36 states that were brought back together as one Union at the end of the Civil War.

Today, students in Hodgenville spend their mornings -- just spent their morning at a very different Lincoln memorial, and you can see it here behind me. This National Historic Site commemorates the simple log cabin where Abraham Lincoln was born. Here, we remember that the man who became our beloved President was once just a young boy -- like the students here from Abraham Lincoln university. He played on the farm and he helped with difficult chores. He began his life with no special advantages -- he just had a strong character and a desire to learn.

Both the Lincoln Memorial in Washington and this Kentucky cabin are fitting tributes to President Lincoln. Together, these monuments tell the story of an ordinary man who answered the call to greatness and led America during a great Civil War. 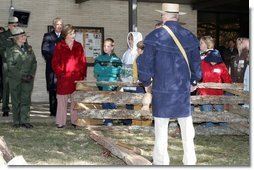 These sites are just two of the 391 National Park Service units that protect America's historic sites and conserve our most magnificent natural landscapes. The National Park Service will celebrate its 100th birthday in 2016. And in honor of this anniversary, President Bush announced the Centennial Challenge that Secretary Kempthorne just told you about which will put our parks on the track for the next century of conservation and protection.

President Bush has called on foundations, and corporations, and individual citizens to donate over the next 10 years over a billion dollars to support our National Park Service. In this same spirit, "Give a Lincoln for Lincoln" -- that campaign is intended to support the parks that honor President Lincoln's memory -- from Washington, D.C., to Springfield, Illinois, to Hodgenville, Kentucky.

The National Parks have always relied on the contributions from individual citizens. In fact, this memorial that's built right here behind us was built as part of a private movement, with the help of donations as small as a quarter. The National Park Service, joined by its charitable partner, the National Park Foundation, is building on this legacy to keep our Park System strong. And through programs like the Junior Rangers -- and these are Junior Rangers who are sitting here in front of us -- we're inspiring America's next generation of stewardship of our National Park treasures.

Children here today earned their Junior Ranger badges by learning how to split rails, and how to spin flax into thread, and they learned just about what life was like when President Lincoln lived here as a boy. Congratulations to all the Junior Rangers here. And I hope some of you will be inspired to grow up and become real Park Rangers.

And there's more good news for Lincoln enthusiasts and park lovers. Yesterday, the National Park Service announced that it's joined the Department of Interior, the Department of Energy, and the National Park Foundation for a groundbreaking energy conservation program -- Energy SmartPARKS. This initiative will result in dozens of projects that promote energy efficiency in our National Parks, including an energy audit at the five Park Service sites dedicated to President Lincoln.

Two projects that are close to home for me illustrate the possibilities of Energy SmartPARKS -- the exterior relighting of the White House and the Washington Monument. Thanks to ground-breaking technology, these national icons are now illuminated every night with energy-efficient lighting. And the update is quite an improvement from the gas lights that President Lincoln used when he lived in the White House! 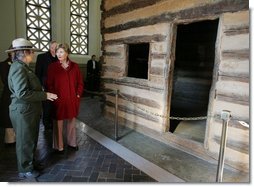 In his most famous speech -- the Gettysburg Address -- President Lincoln spoke of a "government of the people, by the people, and for the people." America's National Parks are a perfect reflection of this democratic life. They invite all Americans, young and old, rich and poor, to share in our natural and historic wonders. And they demand a commitment from all of us to conserve these resources for each generation to come.

Thank you for joining me today at the place where President Lincoln began his life -- a historic site protected as one of America's National Parks.

Thank you all very much. And God bless you. (Applause.)