For Immediate Release
Office of the Press Secretary
November 13, 2008

THE PRESIDENT: Mr. Secretary General, distinguished guests, ladies and gentlemen: Laura and I are pleased to be back here at the United Nations, and I am grateful for the opportunity to once again address the General Assembly.

I want to thank King Abdallah of Saudi Arabia for his leadership and for convincing us all to come together to speak about faith. I appreciate the participants who recognize the transformative and uplifting power of faith. 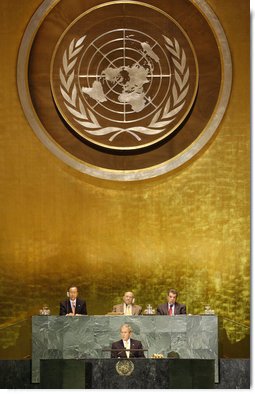 One of my core beliefs is that there is an Almighty God -- and that every man, woman, and child on the face of this Earth bears His image. Many years ago, faith changed my life. Faith has sustained me through the challenges and the joys of my Presidency. And faith will guide me for the rest of my days.

Freedom is God's gift to every man, woman, and child -- and that freedom includes the right of all people to worship as they see fit. Sixty years ago, members of the United Nations General Assembly acknowledged this truth when we adopted the Universal Declaration of Human Rights. The Declaration proclaims that everyone has the right to choose or change religions, and the right to worship in private or in public.

The United States strongly supported the adoption of the Universal Declaration -- in fact, the American delegation was led by a former First Lady, Eleanor Roosevelt. When we voted for the Universal Declaration, the American people reaffirmed a conviction that dates back to our earliest days. Our nation was founded by people seeking haven from religious persecution. The First Amendment of our Constitution guarantees the "free exercise" of religion for all. And through the generations, our nation has helped defend the religious liberty of others -- from liberating the concentration camps of Europe, to protecting Muslims in places like Kosovo, Afghanistan, and Iraq.

Today, the United States is carrying on that noble tradition by making religious liberty a central element of our foreign policy. We've established a Commission on the International Religious Freedom to monitor the state of religious liberty worldwide. We strongly encourage nations to understand that religious freedom is the foundation of a healthy and hopeful society. We're not afraid to stand with religious dissidents and believers who practice their faith, even where it is unwelcome.

One of the best ways to safeguard religious freedom is to aid the rise of democracy. Democratic governments don't all look alike. Each reflects the history and traditions of its own people. But one way -- but one of the defining features of any democracy is that it makes room for people of all backgrounds and all faiths. Democracies allow people with diverse views to discuss their differences and live in harmony.

The expansion of democracy also represents the most promising path to peace. People who are free to express their opinions can challenge the ideologies of hate. They can defend their religious beliefs and speak out against those seeking to twist them to evil ends. They can prevent their children from falling under the sway of extremists by giving them a more hopeful alternative.

Over the past eight years, I've been privileged to see how freedom and faith can lift up lives and lead the world toward peace. I remember clearly a congregation in the state of Kansas in my country whose members stayed together and prayed together, even when a tornado had torn down their church. I've seen faithful caregivers on the continent of Africa who take AIDS patients given up for dead and restore them to health. I have seen mothers across the Middle East whose faith leads them to dream of a better and more peaceful future for their children -- a dream shared by mothers all around the world.

I appreciate every nation participating in today's dialogue. Through dialogue we can draw closer to the day when our prayers for freedom and peace are answered -- and every person on Earth enjoys the rights and dignity granted by an Almighty God.