For Immediate Release
Office of the Press Secretary
November 12, 2008

THE PRESIDENT: Thank you, Frank, and thanks for this great honor. I accept it gratefully, but it ought to be offered to the American people.

Laura and I are thrilled to be with you. I am always a better man when my wife is by my side. (Laughter and applause.)

I want to thank Jules Coles, the President of Africare. Maria Walker, the widow of Bishop John Walker. I was thinking coming over -- let's see, I'm George Walker Bush -- (laughter.) I don't know -- what do you think? (Laughter.) Anyway, Ms. Walker, thank you very much for joining us. 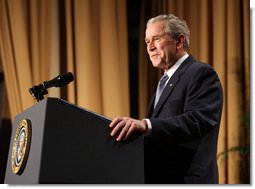 I want to thank the members of the Africare Board of Directors for this honor, but more importantly, for the work you do in Africa.

I thank my friend, Congressman Don Payne, who's one of the leading -- (applause) -- the leading authorities in the United States Congress on African affairs. I'm pleased members of my administration have joined me and Laura here tonight.

Laura and I have the privilege of hosting Bill Frist and his wife Karen at the White House tonight. Make sure you make your bed, Senator, but we thank for coming. (Laughter and applause.)

I want to thank members of the Diplomatic Corps. We are proud you are here tonight.

I'm in pretty good company when it comes to this Humanitarian Service Award. Jules said, man, you're hanging out with some good folks. Last year's award winner went to -- recipient was President Ellen Johnson Sirleaf of Liberia, a great woman. (Applause.) Last year's dinner speaker was, in fact, my wife, Laura. And frankly, knowing both women, I am not sure which is a harder act to follow. (Laughter.)

I really am glad Laura is here because our work in Africa -- and I say our collective work in Africa is a labor of love for us. Laura and I have been to Africa a lot. She has worked in an effective way to help promote education and health. Our girls, Barbara and Jenna, have done a lot of work to help promote dignity on the continent of Africa, particularly with those folks living with HIV/AID. I am proud of their work, and I'm proud of the work of millions of our fellow citizens. It is amazing to me that when you go to Africa the number of Americans you meet who are living out the universal call to love a neighbor like you'd like to be loved yourself -- who are hearing that admonition that "to whom much is given much is required." (Applause.) 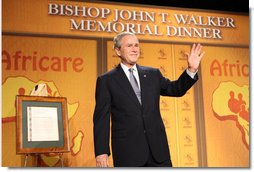 I appreciate those who support Africare. I thank you for your work in caring for orphans in Uganda, or fighting polio in Angola, or resettling refugees from Sudan. I thank you for the work you do in 20 nations on the continent of Africa. And in that work, you are carrying out the vision of the man we honor, Bishop John Walker.

When he was a young clergyman in the '60s, he traveled to Uganda. He was welcomed in the homes of people who needed his message of love. That experience convinced Bishop Walker that Africa's greatest treasure is not its spectacular scenery or natural resources -- but it is the determined spirit of its people. (Applause.)

Bishop Walker understood that disease and poverty and injustice are great challenges -- but he also knew that the people of Africa have the talent and ambition and resolve to overcome them. And frankly, that has been the heart of our policy toward Africa. We do not believe in paternalism; we believe in partnership, because we believe in the potential of the people on the continent of Africa. (Applause.)

I've had a lot of uplifting experiences as the President. And one of the most uplifting has been to witness a new and more hopeful era dawning on the continent. Over the past eight years, it's been moving to watch courageous Africans root out corruption, and open up their economies, and invest in the prosperity of their people. The United States stands with these leaders as partners and friends and allies in hope through the work of the Millennium Challenge Account.

On my trip to Africa this February, I joined President Kikwete of Tanzania to sign a five-year, nearly $700 million Millennium Challenge Compact, which will help build up Tanzania's infrastructure. And as part of this compact, Africare is helping to extend electricity to homes and businesses in some of the most remote areas of the country. My fellow citizens need to hear what President Kikwete said. He said that the Millennium Challenge program is a "source of pride" -- "making it possible for the people of Tanzania to chart a brighter future."

It is uplifting to see people freed from hunger and thirst. And I'm proud of the fact that the American people have supported programs to help feed tens of millions of people on the continent. And I appreciate the work of people here in Africare for helping on that work. Your organization has partnered with our government to address the lack of clean and safe drinking water. This is one of the greatest challenges to development in African nations -- and through your efforts this evening you're helping to overcome it.

On a way -- one way our country is working with African governments is to provide safe water through private-public partnerships, and one such innovative program is called the PlayPumps Alliance. Mr. Dale Jones of PlayPumps, International, is with us today. You probably may not have heard of PlayPumps Alliance -- it's kind of hard for me to say. (Laughter.) But here's the way it works. PlayPumps are children's merry-go-rounds attached to a water pump and a storage tank -- and so when the wheel turns, clean water is produced. Laura and Jenna helped to get one of these new pumps moving during their visit to a Zambian school. As the wheel spun, children on the merry-go-round shouted and laughed with joy -- at the same time, they helped to keep their friends in good health.

There are innovative ways to express the compassion of the American people on the continent of Africa. And I want to thank PlayPumps, International for being one of the innovators. (Applause.)

On my trips to Africa, it has been uplifting to see people fulfilling their God-given potential thanks to a good education. The Africa Education Initiative was mentioned, but a part of that initiative is the fact that we've trained 700,000 teachers, distributed more than 10 million textbooks, and provided hundreds of thousands of scholarships to help girls go to school.

In Liberia, I met a woman named Deddeh Zaizay, who told me that her husband had abandoned her and her three children because she was illiterate. Deddeh is learning to read. She proudly declared in front of the President of Liberia that she plans to go to college. And she has set her sights high -- she wants to be the President of Liberia one day. (Laughter and applause.)

I do not see how you can have a hopeful life if your mother and father is dying of HIV/AIDS, or your baby is dying needlessly because of a mosquito bite. And so we have taken a strong stand against deadly disease. Through the Malaria Initiative, we've partnered with African nations to dramatically reduce infection rates and save lives. Laura and I saw the good work of the American people and the good work of Africare firsthand in Tanzania's Meru District Hospital. New mothers bring their babies into this hospital; they have them tested for malaria and HIV. Nurses distribute bed net vouchers, where mothers can use to buy insecticide-treated bed nets.

Laura and I met the mothers. I cannot tell you the expression of pride they had on their face when they held their babies up and said, my baby is healthy. Nothing more hopeful than to see the joy on a mother's face, realizing that her baby has escaped the scourge of the deadly disease of malaria. I thank all those in this audience, and around our nation, who have helped this Malaria Initiative become robust and effective.

And then, of course, there's the extraordinary story -- stories related to PEPFAR. We launched the initiative in 2003; only 50,000 people in Sub-Sahara Africa were receiving antiretroviral treatment. Today, as was mentioned, we support treatment for nearly 1.7 million people in the region. (Applause.) Africare is making vital contributions to this effort. And with your help, people across Africa now speak of a Lazarus effect: Communities once given up for dead are being brought back to life.

Laura and I have seen this miracle with our own eyes. I'm sure many of you have, as well. She traveled to South Africa in 2005 -- Laura visited a PEPFAR-supported clinic for HIV-positive pregnant women. There, she met Kunene Tantoh. When Kunene first arrived at the clinic, she virtually had no immune system left. But with the treatment she received, Kunene survived. Not only did she survive, two years later she was in the Rose Garden at the White House. She brought with him -- she brought with her, her son, Baron. She wanted Laura and me to see an HIV-free baby. Baron is a reminder of the many lives that have been touched and saved by the compassion of the American people. And he represents the bright and promising future awaiting the folks in Africa.

In our visits to the continent, we have been overwhelmed by the affection and gratitude that the African people show to the American people. Oh, a lot of people are out there saying, why should I care about Africa? What good does it do me, Mr. President, for our government to support Africa? Well, I'll tell you what good it does. One, it is in our national security interest that we defeat hopelessness. It is in our economic interest that we help economies grow. And it is in our moral interest that when we find hunger and suffering, the United States of America responds in a robust and effective way. (Applause.)

I thank Africare for being on the leading edge of this transformative series of initiatives. I hope you feel as good about your contribution as I feel as good about our government's contribution to doing what's right. I'm honored to receive this aware. I am honored to be the President of the most compassion, greatest nation on the face of the Earth. God bless you, and God bless the people of America and Africa. (Applause.)