For Immediate Release
Office of the First Lady
October 24, 2008

MRS. BUSH: Thank you, Dr. Basker. And thanks to everyone here for your interest in American history and for your support for the teachers who bring history to life for students across our country. 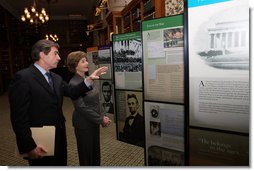 One of the really most fun things about this event for me is the chance to hear the great stories that come out of each of these classrooms, and we're going to get to hear some from David's class in just a minute from the kids that he teaches. After all, history is really made up of great stories. And the teachers who are most successful are the ones who can really get that idea across to their kids: that these are stories, the stories of all the people that lived here before us, and what their lives were like, and what our lives are like because of the lives they lived. So I want to thank everyone here for bringing these stories to life for students everywhere.

Students in Mr. Mitchell's class don't just learn about the past. Through his use of primary sources, they see the past through their forbearers' eyes. As they study Reconstruction, students read a former slave's letter refusing a job on his old plantation. Students learning about Teddy Roosevelt weigh his policies and character by reviewing political cartoons. And students studying the Vietnam War watch segments of historic newscasts, recorded live in active war zones. 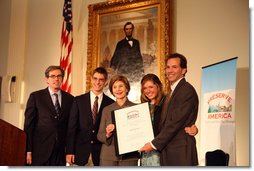 Dave is always on the prowl for new material, which he shares with his students and colleagues alike. He scoured the National Archives to develop a unit on the slave trade in America. He put together a workshop presentation on teaching African American history with primary sources. As a part of his school's Master Teacher Program, he researched and compiled a collection of primary source documents. Dave's enthusiasm is obvious in his description of this collection of documents, which he calls "a revamped high school version of show and tell."

Primary sources are not the only way Dave helps his students experience history. In his "A Picture's Worth A Thousand Words" project, students research the context and impact of iconic American images. They ask questions like "What was the original intent of this photograph?" and "How has the reaction to it changed over time?" In another project, Mr. Mitchell asks his students to design their own Wheaties boxes, promoting a hero of American history. To make sure students draw real connections to our nation's past, Dave asks them to "remember that heroes have flaws -- that's what makes it possible to aspire to their heights."

One element that defines Dave's teaching is what he calls "fishbowl debates." Classes studying the Constitutional Convention are divided into groups of Federalists and anti-Federalists. They study documents that present arguments on either side. And on the day of the debate, they take turns in the center of the room to plead their case.

Patricia Puglisi, the chair of the Social Studies Department, says that Mr. Mitchell's dedication "goes unmatched." She praises Dave for working with students and community members after school hours and during vacations. In February, Mr. Mitchell observed Black History Month by teaching an evening workshop called "Lift Every Voice." In 2006, he spent a February break teaching in Louisiana with a Katrina relief team. And after the 9/11 attacks, Dave led a series of community workshops on "Understanding Islam."

Inspired by a visit to the National Voting Rights Museum, Dave organized the "Run for Jubilee" to support the museum's work. The event took place in Alabama, alongside a reenactment of the Selma to Montgomery march for voting rights. True to form, Dave used the fundraiser as a teaching opportunity. Students in his class researched each day of the 1965 march and learned about the challenges the demonstrators faced on their way to the state capital.

Dave is always searching for new chances to teach and to learn. For him, sharing the love of history is a calling. And Dave's enthusiastic teaching is putting his students on the path to success.

For years, Mr. Mitchell's students have scored above the national average on the Advanced Placement exam for U.S. history. But the best indicators of Dave's talent are the words of his students. One student said, "It's nice to have a class that I actually look forward to." Another student adds that Mr. Mitchell is "the kind of person that you want to respect you."

Dave, you've earned the respect of everyone here. Thank you for making history meaningful in your students' lives. Congratulations on being named the national Preserve America History Teacher of the Year. Congratulations. (Applause.)

Now, here to tell you more about Mr. Mitchell are two of his students: David Burbank and Molly Byman. (Applause.)