For Immediate Release
Office of the Press Secretary
October 9, 2008 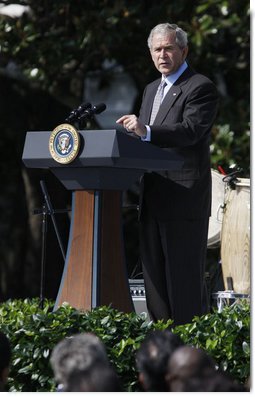 Every year at this time, we recognize the great contributions Hispanic Americans make to our country. And we should. From coast to coast, people of Hispanic descent enrich our culture and make our nation a better place. They serve in top positions throughout business and government. They bring their strong values of faith and family to our communities. My family is proud to have Latino blood -- mi cuñada. (Applause.) Jeb and I both married very well. (Laughter.) Hispanic Americans cherish the limitless promise of our nation. During the past eight years, I've been proud to work with you to ensure que -- ensure que todos puedan alcanzar las promesas de los Estados Unidos. (Applause.)

One promise is good education. I mean, you can't have a hopeful nation unless you've got a good education system. So we worked with Congress to pass the No Child Left Behind Act. This act raises standards and accountability across schools in the country, and I'm pleased to report Hispanic students are scoring at all-time highs on tests, and therefore an achievement gap is narrowing.

For hundreds of thousands of Hispanic children, the best hope for good education is found in America's faith-based schools. Earlier this year, I proposed a new program called Pell Grants for Kids, which would help low-income children in underperforming public schools attend a private, a parochial, or out-of-district public school of their choice. (Applause.)

Earlier this year I met a very interesting young woman at the White House Summit on Inner-City Children and Faith-Based Schools. The whole purpose was to help these schools realize a comeback and make sure our communities were able to have these schools as a part of their future. The woman I met is a woman named Katrina [sic] Ramírez. She grew up in a Chicago neighborhood. It was plagued by gang violence, and she had a tough time in school because she didn't speak English. But at Cristo Rey Jesuit High School, Karina received a top-notch education. She received real work experience, and she got herself a ticket to college. Karina says, "My dad went from garbage picking in Mexico to having a daughter going to Georgetown." Karina, thank you for coming. (Applause.) She is proof that el Sueño Americano es para todos. (Applause.) 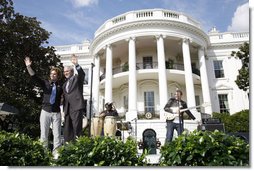 Economic opportunity is a promise of our country. And the truth of the matter is, for generations people have found opportunities in this country that would have been impossible in the places where they were born, and that has made us a vibrant country and it's encouraged entrepreneurship. Today, the economy obviously is going through a very tough stretch, and that's why the administration will work with Congress to pass a financial rescue plan.

I'm confident in our economy's long-term prospects. We'll get through this deal. And the reason why I'm confident is because we got the most talented and productive workers in the world. And many are Hispanic men and women who work hard every single day to support their families. (Applause.)

One promise of America is the compassion of our people. During my time in office I've been proud to work with Hispanic Americans to lift up nuestros hermanos y hermanas in need. I established the USA Freedom Corps to foster a culture of citizenship and responsibility and service. And today nearly 61 million Americans volunteer their time to help our fellow citizens -- many of them Hispanics.

Through our Faith-Based and Community Initiative, we are harnessing the compassion of religious groups to reduce homelessness and break the chains of addiction, give prisoners a second chance, and alleviate suffering at home and abroad. 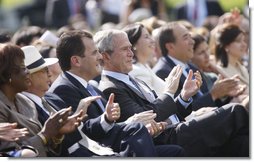 Recently I met a woman from San Diego whose life has been transformed by America's armies of compassion. Edith Espinoza suffered terrible abuse from her husband. She turned to "El Nido" program, an interfaith shelter network supported by the Faith-Based and Community Initiative. "El Nido" is a place where Edith received counseling and learned how to get a job and save money. She and her daughters now live in an apartment that she pays on her own. Her goal is to become a social worker so she can help other families like hers. She is showing that because of the good hearts of our citizens, el sueño Americano es por todos. (Applause.)

One promise of America's freedom -- freedom for all. Hispanic Americans are extending this country's promise of freedom and liberty to others. Hispanics serving in Afghanistan and Iraq, to help those young democracies realize the blessings of freedom. I particularly want to thank those who are working to hasten the day of freedom for the Cuban people. (Applause.)

I'm especially proud to be the Commander-In-Chief of a military in which there's 225,000 Hispanic men and women. (Applause.) One of these hispanos is an Army Lieutenant Colonel named Enrique Guerra. Listen to his story. Enrique fled Cuba with his parents when he was an infant. They wanted their young child to grow up in a society that was free and hopeful. He spent more than 22 years in the Army National Guard and the Army Reserve. Today, he is a battalion commander at Camp Cropper in Iraq, helping the people in the Middle East secure their own freedom and therefore lay the foundation of peace for generations to come.

Enrique puts it this way: "As a Cuban America [sic], I was born with a strong sense of patriotism, and that is why I serve." And today I'm proud to honor his service, and the service of all Hispanic Americans, who ensure that freedom is available to all. Enrique, bienvenidos. Thank you for coming. (Applause.) Thank you, sir.

And so today we celebrate the many contributions that generations of Hispanics have made to the American Dream. Their creativity and determination help our country to live up to its promise of opportunity and prosperity and freedom for all our citizens.

During Hispanic Heritage Month we give thanks for these blessings and we ask for God's continued blessings on you and your families, y los Estados Unidos.

And now it's my honor to welcome one of Latin America's most popular young vocalists, Colombia's Andrés Cabas. (Applause.)