For Immediate Release
Office of the First Lady
October 3, 2008

MRS. BUSH: Thanks, everybody, for coming out. This is something I've wanted to do for a really long time, and that was to go here, come here to Laura Ingalls Wilder's house. She's one of my favorite authors. I loved her books. My mother read them to me when I was little before I could read. And then as I grew up with them, I could read the ones -- the end ones, "The Happy Golden Years" and the ones that were Laura as an older person and a teacher. And of course I always -- she is the character, Laura, in "The Little House on the Prairie" books, that I most associated with myself, because my name was Laura and I had brown hair like she did. And so it's really a thrill to get to be here and see where she wrote the books that meant so much to me as a child. 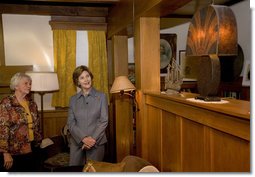 I was telling Mrs. Coday that I read her books -- usually when I taught school I would read "Farmer Boy" because I thought the boys would like those better than the other ones of the series, and those were the ones that I would read to students when I was a teacher. And then of course I read them to Barbara and Jenna when they were little, and Jenna is a teacher now. She knows how much I love those books. I don't know if she's reading them to her students or not yet, but I hope she will.

So it's really great to have this chance to be here to see where these books were written and see that those very first editions that she had look just like the ones that my mother bought for me that I still have in our library. And so I want to thank you very much. Thank you for the tour. This was a really great opportunity to get to be here.

MRS. CODAY: You're so welcome.

And I'm sure you all know Save America's Treasures. It's a partnership with the National Trust for Historic Preservation -- the federal government through the national park system. And it's a way for our historic, iconic -- either sites like this one, or documents, maps, papers, to be able to apply for grants so they can be conserved.

One of the very first things that got a Save America's Treasures grant was the actual Star Spangled Banner, the flag from Fort McHenry which is at the National Museum of American History now, and it's been conserved and worked on.

And many sites in Missouri have been -- have gotten Save America's Treasures grants and are being conserved. I think Missouri has a very active conservation and historical projects group that -- I know Missouri Preservation is part of it, and a lot of other historical groups here in this state. 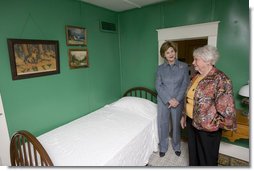 MRS. BUSH: So thanks, everybody. Thank you all a lot. I appreciate it a lot. Thanks for coming out.

Q Thank you for coming.

Q What was your favorite part of the tour?

MRS. BUSH: Well, I loved seeing where she actually wrote the books, but I liked seeing all the things that were artifacts of hers and her family that I'm aware of, like Pa's fiddle that is here and that are part of the story. I liked seeing the photographs of her family, including Mary and Carrie and Grace, the girls, her sisters that were in -- that are in all the books, and of course Almanzo, as well; photographs of him and stories about him that she told in "Farmer's Boy" and in "These Happy Golden Years," in the years that they were together in the books, right before that when she was a teacher.

Q How does the stories of so long ago translate to the youth of today?

These are two things that -- coming here and going to North Dakota yesterday -- that somehow sort of ended up being at the end of my husband's term; both things that -- places that I wanted to visit but for some reason hadn't made it yet, and so I wanted to be sure and make it while George was still President.

These stories, all those stories of the early frontier, are very important for American children to hear. I think this is her story, and the story of Pa and Ma and her sisters, and what life was like and how difficult life was like on the prairie, and how poor people were, but also how rich they were in character and strength; and what really mattered to them was just their family and being able to -- be able to at least provide for their family and be with each other. And I think these stories are very instructive to American children still. And they make up the story of our country, the story of the settling of the Dakota Territory, for instance, which they lived in because North and South Dakota were states. 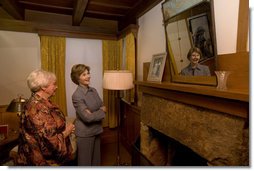 Q How do you hope to continue to advocate for literacy after your husband leaves office?

MRS. BUSH: Well, I'll keep working on that. It's been the focus of my whole life. Reading is my greatest joy, and I want that to be for everyone. But I'll continue in some official roles with the United Nations, their Literacy Decade. I'm their -- the Ambassador of the U.N. Literacy Decade, which is -- goes through UNESCO, which is the U.N. agency that's charged with education. And so I'll continue to do that and work with UNESCO on global literacy concerns.

I hosted last week at the UNGA, the United Nations General Assembly, the third White House summit on global literacy, and we had about 50 spouses of world leaders and many, many education ministers there, as well. UNESCO is trying to focus on the 34 countries with the highest rates of illiteracy in the world, and of course those are countries where many times women are denied education, where girls aren't educated. And about two-thirds of the 700 million people in the world who are illiterate are women, and of course that means Afghanistan and other countries that I've paid attention to for the whole time George has been President. So I hope to continue to focus on that to make sure that girls and women are educated worldwide.

Q Well, I have a question. Can I ask a question as a non-reporter?

Q Seeing the -- I believe there were 40 different translations --

MRS. BUSH: Of her books.

Q -- in 40 different countries. Is there any program now that we are supporting that is --

And then when I was in Egypt with the President earlier this year, the Big Read is doing cooperation with Egypt, and the Egyptians were reading "To Kill a Mockingbird" and, it seems like one other, maybe Ray Bradbury's "Fahrenheit 451." And then we, communities in the United States, could read an Egyptian Nobel Prize winner writer.

So thanks, everybody. I appreciate it. Thank you all for coming out, and good to see you all.

Thank you so much for a great tour.

MRS. CODAY: You are so welcome.

MRS. BUSH: That was great. Congratulations. A new project for Save America's Treasures. (Applause.) 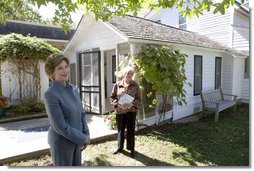