For Immediate Release
Office of the Press Secretary
October 1, 2008

THE PRESIDENT: I want to thank General McKiernan for giving me a briefing on Afghanistan.

Before I talk about our visit, I do want to say this: I appreciate Senator Harry Reid's leadership in the United States Senate when it comes to the financial rescue plan. I also appreciate Mitch McConnell['s] leadership, as well. The Senate will be voting on a very important measure tonight. It's a -- the rescue plan, the bill has been improved by raising -- by other things, raising -- temporarily raising the cap on FDIC insurance. 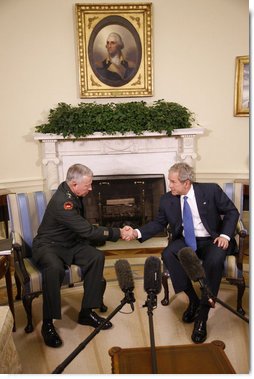 It's very important for us to pass this piece of legislation so as to stabilize the situation so that it doesn't get worse and that our fellow citizens lose wealth and work.

The Senate is going to take this bill up tonight. I'm hopeful they'll pass it, and then the House will have a chance to vote on it Friday morning. As I say, the bill is different, it's been improved, and I'm confident it will pass.

General, thank you for coming. I appreciate your service to the country. General McKiernan is briefing me on the situation in Afghanistan, what he is going to need to make sure that we continue helping this young democracy succeed.

There's difficulties, of course, because killers can't stand this progress. And the General's job is to work with obviously not only our troops but the thousands of troops from NATO countries there to provide the security so the progress continues. And there's been some tough fighting, and we honor our American troops who have sacrificed so that Afghanistan never becomes a safe haven again for extremists who would harm our citizens.

We talked about the comprehensive strategy necessary to succeed. I announced more troops for Afghanistan, and the General, of course, is continually to assess his needs. But we also must make sure there's a civilian component that runs alongside our military, that there's good governance, and that there's aid programs that are effective and focused on the people of Afghanistan, and that the infrastructure progress continues to be made.

General, you and your troops are laying the foundation for peace. You're making a sacrifice today so that future generations of Americans don't have to worry about harm coming from a place like Afghanistan, and future generations of Afghans can grow up in a hopeful society. And I'm proud to be your Commander-in-Chief.