THE PRESIDENT: Good morning. Yesterday, leaders here in Washington reached an extraordinary agreement to deal with an extraordinary problem in our economy. Working closely with my administration, congressional leaders from both parties produced the Emergency Economic Stabilization Act -- a bold bill that will help keep the crisis in our financial system from spreading throughout our economy. 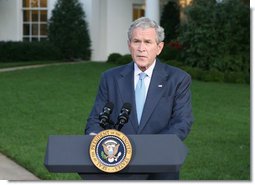 This legislation deals with complex issues, and negotiators were asked to address them in a very short period of time. I appreciate the leadership of members on both sides of the aisle, who came together when our nation was counting on them. Negotiations are sometimes difficult, but their hard work and cooperation paid off.

The bipartisan economic rescue plan addresses the root cause of the financial crisis -- the assets related to home mortgages that have lost value during the housing decline. Under the Emergency Economic Stabilization Act, the federal government will be authorized to purchase these assets from banks and other financial institutions, which will help free them to resume lending to businesses and consumers.

The bill also includes other important ideas put forward by members of Congress from both parties. For example, the bill requires the establishment of a guarantee program that will insure assets at no cost to the taxpayer. The bill provides strong, bipartisan oversight so Americans can be certain that their tax dollars are used carefully and wisely. The bill ensures that failed executives do not receive a windfall from your tax dollars.

With this strong and decisive legislation, we will help restart the flow of credit, so American families can meet their daily needs and American businesses can make purchases, ship goods, and meet their payrolls. We'll make clear that the United States is serious about restoring confidence and stability in our financial system.

I know many Americans are worried about the cost of the bill, and I understand their concern. This bill commits up to 700 billion taxpayer dollars, because a large amount of money is necessary to have an impact on our financial system. However, both the non-partisan Congressional Budget Office and the Office of Management and Budget expect that the ultimate cost to the taxpayer will be far less than that. In fact, we expect that over time, much -- if not all -- of the tax dollars we invest will be paid back.

Now that this legislation has been agreed to by leaders of both parties, it must be passed by houses -- both houses of Congress. And I fully understand that this will be a difficult vote. But with the improvements made to this bill, I'm confident that members of both parties will support it. Congress can send a strong signal to markets at home and abroad by passing this bill promptly. Every member of Congress and every American should keep in mind: A vote for this bill is a vote to prevent economic damage to you and your community.

This has been a volatile time for our financial system and our economy. Even with the important steps we're taking to address the current crisis, we will continue to face serious challenges. The impact of the credit crisis and the housing correction will continue to pressure our financial system and impact the growth of our economy for some time. But I'm confident that this rescue plan -- along with other measures taken by the Treasury Department and the Federal Reserve -- will begin to restore strength and stability to America's financial system and overall economy. And I'm confident that in the long run, America will overcome these challenges and remain the most dynamic and productive economy in the world.