For Immediate Release
Office of the First Lady
September 24, 2008

MRS. BUSH: Well, thank you all for coming out. I think you can see kids are having a great time here. This is called the First Bloom program. It's a cooperative program between the National Park Service, the National Park Foundation, the Lady Bird Johnson Wildflower Center in Austin, and then the Boys and Girls Clubs of Harlem, as well as a school, a couple of schools, I think, are represented here. 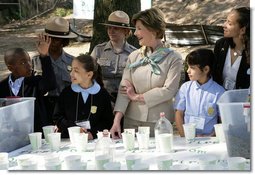 It's a way to connect kids to their parks, their closest national park. And this, the Alexander Hamilton house behind us, is one of our national historic sites. And this neighborhood is going to get to watch while this house is restored. It's going to have -- there's a historical architect who's working on it, so it will be historical restoration. And while they watch the house being restored the kids in the neighborhood, and other community members, are going to be involved in planning the site.

And what we want young people to know across the country with the First Bloom program is what plants are native to their area, which plants will do the best, because they're the native plants that were here. It gives young people a chance to learn about the native plants that would have been here when this was all just open land, or when Alexander Hamilton lived here, what it looked like when all of this property up at this end of Manhattan belonged to him.

And also, I think it gives kids a chance to know about their national parks. We want young people across the country to go to their closest national parks, and then they can get on the web site, the Web Ranger site, and be able to visit national parks around our country.

So this is the third or fourth First Bloom event I've done. I've done events in Dallas. I did an event at the other end of Manhattan in Battery Park. And every time I've seen how kids are very, very excited about having the opportunity to choose the plants that are going to be planted in their neighborhood. It gives them a real chance to feel ownership of their closest national park. And what we hope it will do is train them to grow up to be stewards of all of our environment -- their national parks as well as their own backyards.

So thank you all. Thanks for coming out and covering this. I think you can see from the kids that they're having a great time getting their hands dirty, which is the idea behind First Bloom, to really get to be able to dig in the ground. 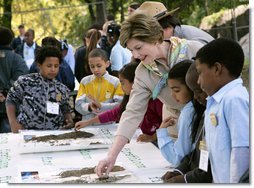 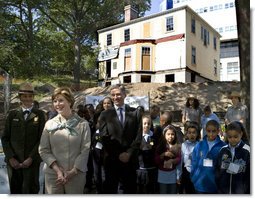