For Immediate Release
Office of the Press Secretary
September 23, 2008

THE PRESIDENT: Laura and I and Secretary Rice and members of my administration have just had a wonderful lunch with democracy leaders, human rights activists, courageous men and women who have stood strong for freedom. I assured them that this government, my government, believes in the universality of freedom. We believe there's an Almighty, and a gift of that Almighty to every man, woman and child is freedom. 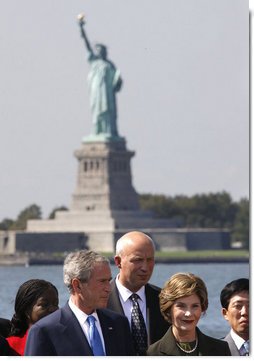 They inspire us. Here in America , we have an obligation to help others realize the blessings of liberty. They have been on the front lines of securing liberty. And so we want to thank you very much for your courage. We thank you for your set of beliefs that remain strong. Thank you for taking time to be with us today. And you might want to say something.

MRS. BUSH: Well, I just wanted to add one thing. I've been inspired by the stories that I've heard from everyone here. Some people that are here have already seen the results of their democracy, their actions for democracy, and are now -- live in countries where democracy is the rule of law in those countries. And so we feel encouraged by their stories.

But I wanted to mention particularly today the man standing beside me from Burma. He's one of the Burmese monks that's a refugee here now. It was almost a year ago exactly that the Burmese monks and many, many citizens of Burma turned out to protest in a peaceful protest -- to protest a rise in gasoline prices that were done by the government.

I want to urge all the neighbors of Burma -- China and India and other neighbors -- to continue trying to talk to the Burmese General, Than Shwe, to see if he can't do what all the world, the international community wants him to do, and that is start respecting the rights of the people of Burma; start a real dialogue for a transition to democracy; talk with the opposition leaders, the people from the National League of Democracy, Aung San Suu Kyi's party, with all the ethnic groups -- bring everyone to the table so that the country can start to rebuild and be the country that the people of Burma want.

I met refugees on the Thai border when the President and I were just in Thailand -- Burmese refugees. These are refugees who want to go home, who want to move back to Burma, and live a life with their rights protected. And one of these refugees is U Kovida, who has had to come to the United States rather than be able to stay there.

I don't know if you want to say anything.

U KOVIDA: Thank you very much for inviting me here. This is really a nice day and my friends -- discussion with many people. In Burma, many (inaudible) people a lot. We all need human rights, all the world's people, because we are all human. So if -- when people, there's no human rights, there's no people and there's no human. So I hope so -- I hope that we all -- international community need to help the Burmese people, and I hope to get help to others -- international community and the U.S. and the European country. And I hope we can change the government some without weapon in Burma and Tibet and other ((inaudible) countries, so around the world we all need peace for change without weapon. Thank you very much.

THE PRESIDENT: Thank you, all. Thanks.