For Immediate Release
Office of the Press Secretary
September 17, 2008

General David Petraeus was asked to do a very difficult job and he did it with distinction and honor. He was a part of the planning for the surge; he implemented the surge, along with a lot of other brave people; and the United States and the world is better off because of it. 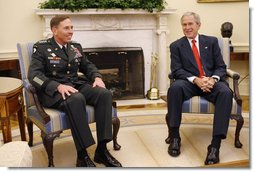 And now the General has agreed to be commander of CENTCOM, which oversees a very important part of the world, the Middle East. And I want to thank you for taking on that assignment, General.

Recently, we saw how important it is, with the attack on our embassy in Yemen. There were some security forces that lost their lives there and we send our condolences to their families. This attack is a reminder that we are at war with extremists who will murder innocent people to achieve their ideological objectives. One objectives of these extremists is they kill; is to try to cause the United States to lose our nerve and to withdraw from regions of the world. And our message is, is that we want to help governments survive the extremists. We want people to live normal lives. We want mothers to be able to raise their sons and daughters in a peaceful environment so they can realize the hopes and dreams of a better world.

GENERAL PETRAEUS: Thanks, Mr. President. Great to be home, sir, and it was a great privilege to serve there with our young men and women.

THE PRESIDENT: God bless you. Thank you. 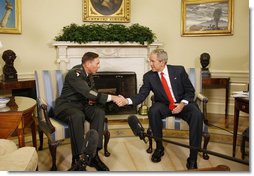