For Immediate Release
Office of the First Lady
September 17, 2008

MRS. BUSH: Welcome to the White House on this historic occasion. Please be seated. Today is the 221st anniversary of the signing of the United States Constitution.

I want to recognize Congressman Ralph Regula and his friends who have come here to visit with him. Thank you very much, Congressman, and thank you very much for all the great work you've done on education for your whole career. I appreciate it very much. (Applause.) 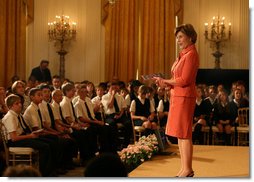 The Director of the National Park Service is here, Mary Bomar. Welcome, Mary. Dr. Allen Weinstein, who's the archivist of the United States, thank you so much for joining us. Joe Torsella, who's the President and CEO of the National Constitution Center, he'll be joining us for part of the program, and let you all know more about our Constitution. Cindy McLeod, the superintendent of Independence National Historical Park is here. Where's Cindy? There's Cindy. Thank you very much for joining us. And the students and faculty from Washington Christian Academy and St. John Regional Catholic School -- and thank you all very much to the students who've joined us. The teachers, historians and others who are here today, I want to thank you especially for your work to promote the study and the appreciation of our founding documents.

Lynne Cheney couldn't be with us today, but she has left a gift for each of us. She's celebrating Constitution Day in Philadelphia. But she's written a new book about our Constitution, and so she's left one to make sure every student can have one.

On this date in 1787, the first draft of the United States Constitution was signed in Philadelphia. The document was not long -- only about 4,500 words. But its seven articles set forth a radically new form of government, and it laid the foundation for our more than 200 years of freedom.

Delegates to the Constitutional Convention spent months debating the principles that this document enshrines. They sought a proper balance between authority and freedom; between federal power and state sovereignty; and between individual rights and national unity. You're no doubt familiar with many of these Founding Fathers' names.

George Washington, who would soon be elected America's first President, was unanimously elected President of the Constitutional Convention. James Madison, our fourth President, earned the name "Father of the Constitution" for his involvement. The oldest delegate was Benjamin Franklin. He brought 81 years of experience to the State House in Philadelphia.

In more than two centuries, only 27 amendments have been added to these delegates' final product -- a reflection of their great wisdom and foresight. Many of these additions were inspired by turning points in American history. The Thirteenth Amendment, for example, abolished the practice of slavery. And in 1920, the Nineteenth Amendment guaranteed women the right to vote. 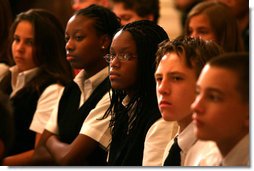 On Constitution Day, people across America celebrate this founding document -- and we reaffirm our rights and responsibilities as American citizens. Today is also a chance to remember the men and women who have helped our imperfect people live up to the ideals of the Constitution's most perfect ideals -- people like Frederick Douglass and Susan B. Anthony, who helped expand voting rights to all Americans.

In 2002, President Bush observed Constitution Day by announcing a new education initiative called "We the People." This program, administered by the National Endowment for the Humanities, is helping more Americans learn about our common history and values. It's funded over 1,600 projects across the country -- including historic preservation efforts and local cultural exhibitions. It's delivered free sets of classic books to more than 9,000 schools and public libraries. And it's sponsored teacher workshops at famous historic sites like Ellis Island and Pearl Harbor for nearly 10,000 educators.

The students who are with us today have seen "We the People's" newest effort firsthand. Both of your schools received a Picturing America award in January. Today, you're learning about our history through a collection of 40 images capturing America's most significant moments -- from Washington Crossing the Delaware to the Selma-to-Montgomery March for Voting Rights.

Another resource for students learning about American history is the National Constitution Center in Philadelphia. I'm happy to tell you that in honor of Constitution Day, we have brought a little piece of this museum to the White House. Here to tell you more about it is Joe Torsella. (Applause.) 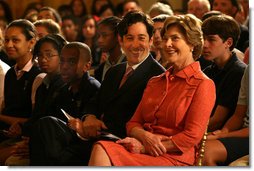