For Immediate Release
Office of the Press Secretary
September 16, 2008

THE PRESIDENT: So listen, I have come home to the great state under very difficult circumstances for the people who live down here. My first observation is that the state government and local folks are working very closely and working hard and have put a good response together. The evacuation plan was excellent in its planning and in execution. The rescue plan was very bold, and we owe a debt of gratitude to those who were on the front line pulling people out of harm's way, like the Coast Guard people behind us here. 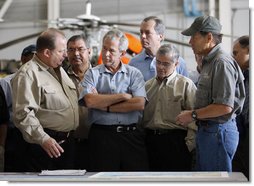 I'm now asking questions about how the federal government can help the response and help the recovery effort begin. One thing is, is that we have decided to match 100 percent -- or pay 100 percent with no state match for debris removal, as well as the emergency preparedness that the state and local government have put in place and executed.

Secondly, obviously people are concerned about electricity and, you know, the -- what I look for, is there enough help to get these energy companies to do what they instinctively want to do, which is get the grid up again. And I'm told by the folks who are monitoring this that there is a lot of people that are coming into this state to help restring wires, and that there's a lot of focus on getting the grid up. And so the sooner this electricity gets going, obviously the easier it is going to be to help recover.

People have been moved out of their homes, and I know a lot of people are anxious to get back in. I urge you to listen to state and local authorities before you come back. It is their considered judgment which is important for you. And I know some are concerned about whether or not the government will reimburse you for your stay, and the answer is yes; we've got a plan for the next 30 days and of course we'll continue to monitor this situation as to reimbursing you for your time away from home.

One thing that's a concern is to whether or not we're getting water and fuel distributed. We just had a good discussion about how to make sure that we continue the -- making sure these points of distribution are fully supplied. Step one is, do we have points of distribution in place, and then how do we make sure they are supplied in a way that meets the people's needs? And the state and the federal government are sharing that responsibility -- the federal government inside Harris County, primarily the state outside Harris County. Thus far -- I know there are some shortages, but thus far the demand has been met, and we'll continue to monitor the situation to make sure that people are taken care of.

We're fixing to go down to Galveston and obviously are going to see a devastated part of this fantastic state. And it'll give the Governor and me and the Congressmen and Senator and others a chance to express our heartfelt sympathies for those whose lives have been, you know, disrupted. It's -- you know, it's a tough situation on the Coast. I have been President long enough to have seen tough situations and have seen the resilience of the people be able to deal with a tough situation. It may be hard for people to now envision a better Galveston or a better Orange or some of these other communities that have been affected, but I know with proper help from the federal government and state government there will be a better tomorrow.

And so it is with -- you know, it is -- it's good to be home. I'm just sorry it's under these circumstances.

THE PRESIDENT: -- for having us.

GOVERNOR PERRY: Glad to have you home.