For Immediate Release
Office of the Press Secretary
July 28, 2008

PRESIDENT BUSH: Mr. Prime Minister, welcome. It's been a -- it's been a very constructive morning. We've had a good meeting in the Oval Office. And then I'm going to have lunch with the Prime Minister here in the main White House. And that's fitting. After all, Pakistan is a strong ally and a vibrant democracy. The United States supports the democracy and supports the sovereignty of Pakistan. 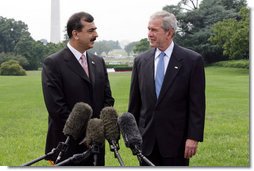 We talked about areas of concern. Of course, we're going to spend a lot of time on the economy, about how the United States and Pakistan can continue to cooperate to -- for economic benefits for all the people of Pakistan and for our own country, for that matter. And of course, we talked about the common threat we face: extremists who are very dangerous people. We talked about the need for us to make sure that the Afghan border is secure as best as possible; Pakistan has made a very strong commitment to that. I told the Prime Minister that the United States is committed to helping the Afghan democracy succeed, which is in Pakistan's interest. After all, the Prime Minister wants there to be a peaceful country on his border.

The U.S., I repeat, respects the sovereignty of this democracy. And we also appreciate the Prime Minister's strong words against the extremists and terrorists who not only would do us harm but have harmed people inside -- in Pakistan.

So we welcome you here, Mr. Prime Minister, and looking forward to having a good lunch with you after your statement.

PRIME MINISTER GILLANI: First of all, I want to thank Mr. President Bush for inviting me to United States, and this is my second meeting with the President. Previously I met Mr. President in Sharm el Sheikh, and today again I am meeting Mr. President.

And I appreciate what he has said about supporting democracy, supporting sovereignty, looking after the interests and on a lot of other areas we are -- there's a cooperation between us -- Pakistan, United States have very cordial relations and bilateral relations. And this is not of today -- this is for over 60 years since the creation of Pakistan. We were inspired with their slogan of liberty and self-determination. And now we want to further improve our relations.

We are committed to fight against those extremists and terrorists who are destroying and making the world not safe. And that is -- this is our own war; this is a war which is against Pakistan. And we'll fight for our own past. And that is because I have lost my own leader, Benazir Bhutto, because of the militants, and therefore I assure United States, the people of United States, that majority of the people of Pakistan and the people of those areas, the NWFP and FATA, they are the patriarch, the loyalists, they want the peace in the world, and they want to cooperate. And there are few militants -- they are hand-picked people, militants, who are disturbing this peace. And I assured Mr. President we'll work together for democracy and for the prosperity and peace of the world. 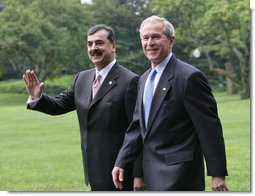