For Immediate Release
Office of the Press Secretary
June 30, 2008

THE PRESIDENT: Good morning. A few moments ago I signed legislation that funds our troops who are in harm's way. Our nation has no greater responsibility than supporting our men and women in uniform -- especially since we're at war. This is a responsibility all of us in Washington share -- not as Republicans or Democrats, but as Americans. And I want to thank leaders of the House and Senate for getting this bill to my office. 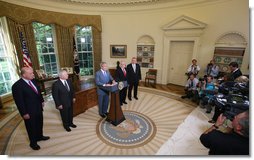 America remains a nation at war. There are enemies who intend to harm us. Standing in their way are brave men and women, who put on the uniform, who raise their right hand, and took an oath to defend our freedom. They volunteered to deploy in distant lands, far from their families, far from their homes, and far from comfort of America. And every day, they risk their lives to defeat our adversaries and to keep our country safe.

We owe these brave Americans our gratitude. We owe them our unflinching support. And the best way to demonstrate that support is to give them the resources they need to do their jobs and to prevail. The bill I sign today does exactly that. It provides necessary funds to support our troops as they conduct military operations in Iraq, in Afghanistan, and in other theaters in the war on terror.

I appreciate that Republicans and Democrats in Congress agreed to provide these vital funds without tying the hands of our commanders, and without an artificial timetable of withdrawal from Iraq. Our troops have driven the terrorists and extremists from many strongholds in Iraq; today violence is at the lowest level since March of 2004. As a result of this progress, some of our troops are coming home as result of our policy called "return on success." We welcome them home. And with this legislation we send a clear message to all that are servings [sic] on the front line that our nation continues to support them.

We also owe a debt of gratitude to our nation's military families. They endure sleepless nights, and the daily struggle of caring for children while a loved one is serving far from home. We have a responsibility to provide for them. So I'm pleased that the bill I sign today includes an expansion of the GI Bill. This legislation will make it easier for our troops to transfer unused education benefits to their spouses and children. It will help us to recruit and reward the best military on the face of the Earth. It will help us to meet our responsibilities to those who support our troops every day -- America's great military families.

The bill also includes agreed-upon funding for other critical national priorities. This bill includes $465 million for the Merida Initiative -- a partnership with Mexico and nations in Central America to crack down on violent drug trafficking gangs. The bill includes nearly $2.7 billion to help ensure that any state facing a disaster like the recent flooding and tornadoes in the Midwest has access to needed resources. This bill includes a measured expansion of unemployment insurance benefits with a reasonable work requirement. And this bill holds overall discretionary spending within the sensible limits that I requested.

The bill is a result of close collaboration between my administration and members of both parties on Capitol Hill. I appreciate the hard work of my Cabinet -- especially the leaders of Defense and State, and Veterans Affairs, the Office of National Drug Control Policy, as well as OMB. I want to thank House and Senate leadership and leaders of the House and Senate Appropriations Committees. I am particularly grateful to Congressmen Boehner, Hoyer, Obey, and Lewis. And I want to thank members who worked hard for the GI Bill expansion -- especially Senators Webb and Warner, Graham, Burr, and McCain.

This bill shows the American people that even in an election year, Republicans and Democrats can come together to stand behind our troops and their families.

Thank you for coming.