PRESIDENT BUSH: It's been my pleasure to welcome my friend, the President of Panama. Mr. President, welcome back. It's good to see you, sir. I can't thank you enough for your friendship and your leadership. Under your leadership, relations between the United States and Panama are strong and healthy and vibrant.

I'll never forget being your guest in your beautiful country and going to see the Panama Canal. It's a engineering marvel. And then when you shared with me your vision about the expansion of the Canal, I said, here's a man who thinks big. And in fact, not only do you think big, but you act. And the President has shared with me the expansion plans, the progress being made. And I congratulate you very much for that progress. 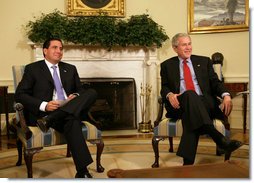 Secondly, we talked about trade. The Panamanian free trade vote is a priority of this government. It is -- it should be a priority of the United States Congress. The President has heard a lot of talk about whether or not trade bills will move or not, and I assured him that we will do everything in our capacity to move the trade bills -- not only the Panamanian bill, but the Colombian bill and the Korean bill. It's in this country's interest, Mr. President. And I want to thank you for going up to the Hill to work the issue.

We talked about food prices. The President is deeply concerned about the cost of food for the citizens of his country. I expressed the same concerns. I told him that if there's any way that we can help with food shortages, we'll try to help. But I appreciate your compassion and corazón grande.

And finally, we talked about drugs -- drugas. And I assured him I understood that the drug issue is two-way: One, that because too many of our citizens use drugs it provides an avenue for the movement of drugs. And we've got to do a better job in America reducing the demand for drugs. And we must also help our friends in the neighborhood deal with the suppliers of drugs. The President is committed to sharing intelligence and working closely -- and so are we -- working closely together to prevent drugs from being transhipped through Panama, which is bad for his country and bad for ours.

And, Mr. President, I'm honored you're here, and I thank you again for coming. Buen hombre.

I want to thank you for the cooperation that we are experiencing in this difficult time regarding food prices and exchanging ideas on projects that we have on the bilateral agenda -- projects on education, projects on health, and of course, a mutual commitment of fighting drug trafficking to the benefit of both countries, and building the capacity of the region to be able to handle the problems related to drugs and crime.

So, thank you, sir. It's been really a privilege, the friendship that Panama has with the United States, and we hope that this success story of Panama and the United States solving the issue of the Panama Canal, and now looking forward toward the future of the canal expansion, is something that we always keep in mind in how we can build a mutual future.