For Immediate Release
Office of the Press Secretary
May 1, 2008

THE PRESIDENT: Good morning. Welcome to the White House. And I am honored to join you for the National Day of Prayer. I'm sorry Laura is not here -- she's out selling her book. (Laughter.)

Shirley, thank you very much for being the Chairman of the National Day of Prayer. Glad you brought old Jim with you. (Laughter.) Dr. Zacharias, thank you for being the Honorary Chairman. I appreciate the members of my Cabinet who are here today, thank you all for coming. It's good to see members of the United States Senate and the House of Representatives. Appreciate you all taking time out of your busy schedule to come by. It's always good to be with you. 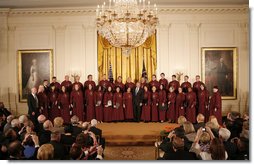 I want to thank our military chaplains who are with us. Thank you for doing the Lord's work with our troops. I'm proud to have prayer leaders here. Rabbi Fishman, thank you, it's good to see you again, sir. Father Coughlin, from the United States House of Representatives, it's good to see you, sir. I want to thank Pastor Mays, who will be following me here shortly, for coming. I'm looking forward to hearing the choir of Saint Patrick's Cathedral, New York City, New York. It's going to be a great moment to have this East Room filled with the joy of song. So I welcome them here today.

On this day, Americans come together to thank our Creator for our nation's many blessings. We are a blessed nation. And on this day, we celebrate our freedoms, particularly the freedom to pray in public and the great diversity of faith found in America. I love being the President of a country where people feel free to worship as they see fit. And I remind our fellow citizens, if you choose to worship or not worship, and no matter how you worship, we're all equally American. (Applause.)

I think one of the interesting things about a National Day of Prayer is it does help describe our nation's character to others. We are a prayerful nation. A lot of citizens draw comfort from prayer. Prayer is an important part of the lives of millions of Americans. And it's interesting, when you think about our faith you can find it in the Pledge of Allegiance, you can find an expression of American faith in the Declaration of Independence, and you can find it in the coins in our pockets. I used to carry coins -- (laughter) -- in about 10 months I'll be carrying them again. (Laughter and applause.)

The fidelity to faith has been present in our nation's leaders from its very start. Upon assuming the presidency, George Washington took the oath of office and then added the famous plea, "So help me God." On John Adams's first day in the White House, he wrote a prayer that is now etched in marble on the fireplace in the State Dining Room, and he prayed, "May none but honest and wise men ever rule under this roof." Now we'll leave it to the historians to judge whether or not that happened throughout our history. (Laughter.) 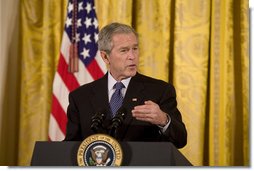 As William McKinley lay dying from an assassin's bullet, one of his final words on earth focused on the Almighty. On his deathbed he was heard to say, "Nearer, my God to thee."

As American forces risked their lives on D-Day, Franklin Roosevelt delivered a presidential prayer over the radio. He asked God to protect our troops as they liberated "a suffering humanity" and he prayed for "a peace that will let all men live in freedom." When Roosevelt died, his successor, Harry Truman, said he "felt like the moon, the stars and all the planets" had fallen on him. And he told reporters: "Boys, if you ever pray, pray for me now."

Well, sometimes God's signs are not always the ones we look for. And we learn in tragedy that His purposes are not always our own. But we also know that in adversity we can find comfort through prayer.

Over the last seven years, our country has faced many trials. And time and time again we have turned to prayer and found strength and resilience. We prayed with those who've lost everything in natural disasters, and helped them heal and recover and build. We prayed for our brave and brilliant troops who died on the field of battle. We lift up their families in prayer. And as we pray for God's continued blessings on our country, I think it makes sense to hope that one day there may be a International Day of Prayer, that one day the national -- (applause.) It will be a chance for people of faith around the world to stop at the same time to pause to praise an Almighty. It will be a time when we could prayer together for a world that sees the promise of the Psalms made real: "Your love is ever before me, and I walk continually in your truth."

I want to thank you all for coming. Particularly want to thank you for your prayers. You know, somebody asked me one time, when I was there over seeing the Sea of Galilee, they said, what did you think about what you were there, Mr. President? I said I have finally understood the story of the calm on the rough seas. I may have been a little hardheaded at times, but I'm absolutely convinced it was the prayers of the people who helped me understood in turbulence you can find calm and strength. And I thank you for those prayers. (Applause.)