PRESIDENT BUSH: Thank you. Siéntese por favor. Mr. President, we are sure glad you're here. And thank you for inviting me to be here. Madam Foreign Minister; Consul Garcia Guerra; Ambassador, thanks. Governor; el Alcalde -- Mr. Mayor; Ambassador Garza: I am really glad to be with you on this special occasion. I am pleased that Mexico has chosen to reopen its consulate in New Orleans, and I'm honored to attend. 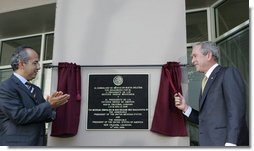 New Orleans has had a long tradition of diplomatic ties with Mexico. In 1824, New Orleans , Louisiana became the first site of the Mexican -- for the first -- became the site for the first Mexican consulate in the United States. Isn't that interesting? Unfortunately, the consulate was closed in 2002. And so, today we're reopening the consulate. And it's a good sign, because we celebrate the values that cause Mexico and the United States to be friends -- values like family, and faith and culture.

We celebrate the enduring and close partnership between our countries. Mexico and the United States are working together to build a future of prosperity and opportunity for people on both sides of the border. And at this ceremony, we also celebrate the comeback of a great American city. You know, I chose New Orleans for our meetings with Mexico and Canada because I wanted to send a clear signal to the people of my country that New Orleans is open for business, and it's a good place to visit, and that after the devastation of Katrina, it's become a hopeful city.

And so, on behalf of the people of the United States, Mr. President, mi amigo, I thank you for reopening this consulate. I look forward to our meetings. And it's my honor to bring you to the podium. (Applause.)

It's an honor for me to be able to re-inaugurate the Mexican consulate in New Orleans, and I very specially want to thank President Bush for his presence here this afternoon, as well as the presence of the Governor and the Mayor of the city, because I know that the President's presence is a sign of the importance that his administration attaches to the relationship with Mexico.

As President Bush already said, the Mexican consulate in New Orleans was the first Mexican consulate in the United States once our national independence was achieved. Now with the reopening of this consulate, we'll be able to guarantee to those Mexicans who live and work in Louisiana and Mississippi that they will have the support of the Mexican government. It is my commitment that no matter where there is a Mexican citizen, he or she will also have the support there of our government. 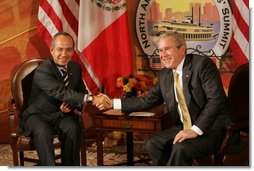 This interdependence is also reflected in the exchanges -- not only trade exchanges but also personal exchanges -- that take place between Mexico and the United States. Thousands of Mexican citizens have found in the United States opportunities for progress, and they have provided their work and their talent to benefit this great country.

For that reason, I know that we must have a comprehensive vision in this area, in the area of migration, which will allow us to work together in order to build a more prosperous and safer North American continent. It is precisely this Mexican consulate in New Orleans that will fulfill its responsibility not just to attend to the Mexican population in the region, but also to promote the integration and development of our economies -- Mexican exports to the United States, and U.S. investments in Mexico.

Our relations are not just economic in nature. They also have deep ties of friendship, and I'm sure that we are going to strengthen them even more at this meeting. Those links were strengthened on the occasion of the devastating tragedies caused by Hurricane Katrina and Hurricane Rita. At that time the people of Mexico expressed its solidarity to our brothers and sisters in Louisiana. I know that thousands of Mexicans have participated in the reconstruction of New Orleans. I'm very happy today to see New Orleans standing and working.

Today I want to express Mexico's solidarity with the population of this great city, and I'd like to reiterate my appreciation for the work of the solidarity carried out by Mexicans at that time, especially the Mexican armed forces who worked by providing cooperation in assisting the civilian population during the tragedy. New Orleans from the first day was very close to the heart of all Mexicans.

Mr. President, Mr. Governor, Mr. Mayor, ladies and gentlemen, I've come to this sister city in order to follow up on our work in intensifying the relationship among our countries. We'll have a great opportunity with the North American Leaders' Summit.

And this consulate in New Orleans, the 48th of our country on U.S. soil and the fifth that Mexico has opened during my administration, will contribute to the purpose of strengthening the ties between Mexico and the United States, and so that North America moves towards a future of prosperity and security for our nations. May all Mexicans who live in the United States know, and in particular those who are living in the states of Louisiana and Mississippi, that my administration will continue to watch over its -- their security and their rights.