For Immediate Release
Office of the Press Secretary
April 16, 2008

PRESIDENT BUSH: Holy Father, Laura and I are privileged to have you here at the White House. We welcome you with the ancient words commended by Saint Augustine: "Pax Tecum." Peace be with you.

You've chosen to visit America on your birthday. Well, birthdays are traditionally spent with close friends, so our entire nation is moved and honored that you've decided to share this special day with us. We wish you much health and happiness -- today and for many years to come. (Applause.) 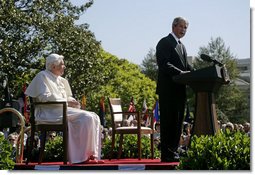 This is your first trip to the United States since you ascended to the Chair of Saint Peter. You will visit two of our greatest cities and meet countless Americans, including many who have traveled from across the country to see with you and to share in the joy of this visit. Here in America you'll find a nation of prayer. Each day millions of our citizens approach our Maker on bended knee, seeking His grace and giving thanks for the many blessings He bestows upon us. Millions of Americans have been praying for your visit, and millions look forward to praying with you this week.

Here in America you'll find a nation of compassion. Americans believe that the measure of a free society is how we treat the weakest and most vulnerable among us. So each day citizens across America answer the universal call to feed the hungry and comfort the sick and care for the infirm. Each day across the world the United States is working to eradicate disease, alleviate poverty, promote peace and bring the light of hope to places still mired in the darkness of tyranny and despair.

Here in America you'll find a nation that welcomes the role of faith in the public square. When our Founders declared our nation's independence, they rested their case on an appeal to the "laws of nature, and of nature's God." We believe in religious liberty. We also believe that a love for freedom and a common moral law are written into every human heart, and that these constitute the firm foundation on which any successful free society must be built.

Here in America, you'll find a nation that is fully modern, yet guided by ancient and eternal truths. The United States is the most innovative, creative and dynamic country on earth -- it is also among the most religious. In our nation, faith and reason coexist in harmony. This is one of our country's greatest strengths, and one of the reasons that our land remains a beacon of hope and opportunity for millions across the world.

Most of all, Holy Father, you will find in America people whose hearts are open to your message of hope. And America and the world need this message. In a world where some invoke the name of God to justify acts of terror and murder and hate, we need your message that "God is love." And embracing this love is the surest way to save men from "falling prey to the teaching of fanaticism and terrorism." 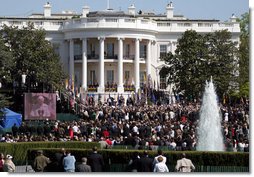 In a world where some no longer believe that we can distinguish between simple right and wrong, we need your message to reject this "dictatorship of relativism," and embrace a culture of justice and truth. (Applause.)

In a world where some see freedom as simply the right to do as they wish, we need your message that true liberty requires us to live our freedom not just for ourselves, but "in a spirit of mutual support."

Holy Father, thank you for making this journey to America. Our nation welcomes you. We appreciate the example you set for the world, and we ask that you always keep us in your prayers. (Applause.)

POPE BENEDICT XVI: Mr. President, thank you for your gracious words of welcome on behalf of the people of the United States of America. I deeply appreciate your invitation to visit this great country. My visit coincides with an important moment in the life of the Catholic community in America: the celebration of the 200th anniversary of elevation of the country's first Diocese -- Baltimore -- to a metropolitan Archdiocese and the establishment of the Sees of New York, Boston, Philadelphia and Louisville.

Yet I am happy to be here as a guest of all Americans. I come as a friend, a preacher of the Gospel, and one with great respect for this vast pluralistic society. America's Catholics have made, and continue to make, an excellent contribution to the life of their country. As I begin my visit, I trust that my presence will be a source of renewal and hope for the Church in the United States, and strengthen the resolve of Catholics to contribute ever more responsibly to the life of this nation, of which they are proud to be citizens.

From the dawn of the Republic, America's quest for freedom has been guided by the conviction that the principles governing political and social life are intimately linked to a moral order based on the dominion of God the Creator. The framers of this nation's founding documents drew upon this conviction when they proclaimed the self-evident truth that all men are created equal and endowed with inalienable rights grounded in the laws of nature and of nature's God. 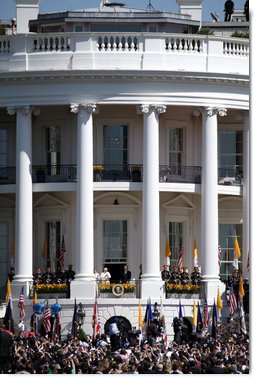 The course of American history demonstrates the difficulties, the struggles, and the great intellectual and moral resolve which were demanded to shape a society which faithfully embodied these noble principles. In that process, which forged the soul of the nation, religious beliefs were a constant inspiration and driving force, as for example in the struggle against slavery and in the civil rights movement. In our time, too, particularly in moments of crisis, Americans continue to find their strength in a commitment to this patrimony of shared ideas and aspirations.

In the next few days, I look forward to meeting not only with America's Catholic community, but with other Christian communities and representatives of the many religious traditions present in this country. Historically, not only Catholics, but all believers have found here the freedom to worship God in accordance with the dictates of their conscience, while at the same time being accepted as part of a commonwealth in which each individual group can make its voice heard.

As the nation faces the increasingly complex political and ethical issues of our time, I am confident that the American people will find in their religious beliefs a precious source of insight and an inspiration to pursue reasoned, responsible and respectful dialogue in the effort to build a more human and free society.

Freedom is not only a gift, but also a summons to personal responsibility. Americans know this from experience -- almost every town in this country has its monuments honoring those who sacrificed their lives in defense of freedom, both at home and abroad. The preservation of freedom calls for the cultivation of virtue, self-discipline, sacrifice for the common good, and a sense of responsibility towards the less fortunate. It also demands the courage to engage in civic life and to bring one's deepest beliefs and values to reasoned public debate.

In a word, freedom is ever new. It is a challenge held out to each generation, and it must constantly be won over for the cause of good. Few have understood this as clearly as the late Pope John Paul II. In reflecting on the spiritual victory of freedom over totalitarianism in his native Poland and in Eastern Europe, he reminded us that history shows time and again that "in a world without truth, freedom loses its foundation," and a democracy without values can lose its very soul. Those prophetic words in some sense echo the conviction of President Washington, expressed in his Farewell Address, that religion and morality represent "indispensable supports" of political prosperity. 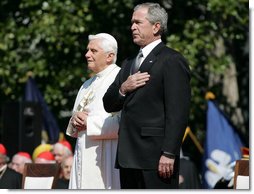 The Church, for her part, wishes to contribute to building a world ever more worthy of the human person, created in the image and likeness of God. She is convinced that faith sheds new light on all things, and that the Gospel reveals the noble vocation and sublime destiny of every man and woman. Faith also gives us the strength to respond to our high calling and to hope that inspires us to work for an ever more just and fraternal society. Democracy can only flourish, as your founding fathers realized, when political leaders and those whom they represent are guided by truth and bring the wisdom born of firm moral principle to decisions affecting the life and future of the nation.

For well over a century, the United States of America has played an important role in the international community. On Friday, God willing, I will have the honor of addressing the United Nations organization, where I hope to encourage the efforts underway to make that institution an ever more effective voice for the legitimate aspirations of all the world's peoples.

On this, the 60th anniversary of the Universal Declaration of Human Rights, the need for global solidarity is as urgent as ever, if all people are to live in a way worthy of their dignity -- as brothers and sisters dwelling in the same house and around that table which God's bounty has set for all his children. America has traditionally shown herself generous in meeting immediate human needs, fostering development and offering relief to the victims of natural catastrophes. I am confident that this concern for the greater human family will continue to find expression in support for the patient efforts of international diplomacy to resolve conflicts and promote progress. In this way, coming generations will be able to live in a world where truth, freedom and justice can flourish -- a world where the God-given dignity and the rights of every man, women and child are cherished, protected and effectively advanced.

Mr. President, dear friends, as I begin my visit to the United States, I express once more my gratitude for your invitation, my joy to be in your midst, and my fervent prayers that Almighty God will confirm this nation and its people in the ways of justice, prosperity and peace. God bless America. (Applause.) 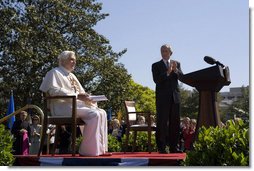