For Immediate Release
Office of the Press Secretary
March 12, 2008

THE PRESIDENT: Thank you all. Mr. Ambassador, thank you for the invitation. You've got a beautiful place here. (Laughter.) Rima, thanks very much. I'm honored to be with you. I'm a little late because Laura had me watching "Father of the Bride." (Laughter.) And in that I didn't finish it, I'm going to make my remarks short and go home and watch it. (Laughter.) It's going to be a big year for us. So the guy comes to see me, and he says, I want to marry your daughter. I said, done deal. (Laughter.) 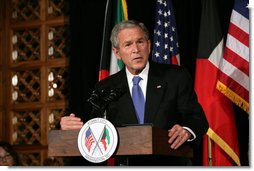 It's also a big year for us because I'm absolutely convinced the momentum that we have started on the continent of Africa in dealing with HIV/AIDS or malaria is going to continue on for a long period of time. And I want to thank you all very much for supporting the initiative.

I do want to say something about our Secretary of State. I can remember early on in my administration -- she was the National Security Advisor then -- and she said, I presume you're going to pay attention to Africa. And I said, that's a good presumption, because I believe to whom much is given, much is required. And the United States of America has been given a lot. And I firmly believe we're required to respond to human tragedy when we see it.

And there's nothing more tragic than a young baby dying because of a mosquito bite. And so I come to you optimistic about this initiative, and thankful for the folks who are supporting Malaria No More. I, too, want to thank Ray Chambers for his leadership. I like it when people do well in the business world, and then rather than retire, decide to put something back into society. That's exactly what you've done, and we're very grateful for doing what you're doing. I see Justice Alito is here. That's good. Hey, Sam, good to see you. (Laughter.)

Youssou N'Dour. So, Youssou, I've been practicing my dancing recently -- (laughter) -- and singing. (Laughter.) And I'm available for a few tips. I appreciate the members of my Cabinet who are here, and members of Congress.

I, too, want to thank Admiral Mike Mullen for serving as the Chairman of the Joint Chiefs, and his wife, Deborah. It's amazing to be the Commander-in-Chief of a group of people that are dedicated, selfless and courageous like our military, and Admiral Mullen represents the very best of the U.S. military. I thank the Diplomatic Corps who is here, as well.

So, my friends in Texas say, you know, don't we have enough problems here at home? And my answer is, we're wealthy enough and we're strong enough and we're good enough to take problems -- take on problems here at home, as well as in other parts of the world. And then I remind them that we're living in a very difficult period in the history of the world. After all, we're witnessing an ideological struggle between those who kill the innocent to achieve political objectives and those who believe in human dignity and human rights and human freedom. 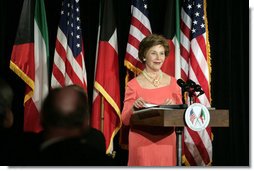 And it's a tough time, and it's going to take a while to prevail. But one thing is for certain: that this enemy we face cannot possibly find recruits based upon their vision. Their vision for life is so dark and so dim and so degrading that it's impossible for them to recruit unless they find hopeless situations. And there's nothing more hopeless for a mother to see a baby die needlessly. And there's nothing more hopeless than a pandemic that sweeps through a continent.

And so the initiative, the Malaria No More initiative, first and foremost is a part of our efforts to make sure that peace prevails in the long term. And it's working. It's amazing. Admiral Ziemer is here. This guy can get the job done. See, I -- one of the things that we pride ourselves on in this administration is we like to not only be talkers, we like to be doers. We like to set out an agenda and then see to it that the agenda is accomplished.

And working on this Malaria Initiative, we can measure. You can measure how many nets have been purchased and distributed; how many pills have been distributed; how many countries have been affected. When we were in Tanzania, we were told that Zanzibar, which is a part of Tanzania, went from having their babies infected by malaria at the tune of 20 percent to 1 percent in 18 months. And so I am the kind of fellow that says, this is in our interests and I expect the monies that we're spending to be spent well and to be spent wisely, and they are.

It's also in our moral interest. Our nation is a better nation when we help people save lives. The collective will of the American people to help somebody who suffers, who they might not ever know, lifts our national spirit. And so on our trip to Africa, I tried to make sure that the people of Africa understood this wasn't a George Bush initiative or a Laura Bush initiative or a Condi Rice initiative; this was an initiative of the most compassionate people on the face of the earth -- the American people.

And you're helping this initiative go forward. And so I've taken a breather from the movie to come by -- (laughter) -- to thank you very much for standing strong with the forces of goodness and light and compassion. And the work you're doing is necessary and it's important and it's succeeding. And I hope you take great heart in that.

Thanks for letting me come by to say, hi; and God bless you all. (Applause.)