For Immediate Release
Office of the Vice President
February 26, 2008

THE VICE PRESIDENT: Well, thank you very much. And General, I appreciate the kind words, and I thank all of you for that warm welcome today. It's a great day to be in Texas, to stand with the men and women we proudly call the First Team -- the First Cavalry Division of the United States Army. (Applause.)

I've been to Fort Hood a number of times over the years -- as Vice President, member of Congress, Secretary of Defense -- and it's a pleasure to return. In this place we've given generations of soldiers the finest training we can provide, and sent them forth to confront the violent, to protect the innocent, and to defend the security of our nation. The soldiers of Fort Hood follow in a great tradition of bravery, skill, and honor. And I'm proud to be with all of you, and I bring respect and good wishes from our Commander in Chief, President George W. Bush. (Applause.) It's all right, it's Texas. (Laughter.) 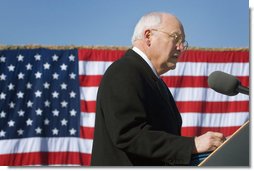 Many of you joined the Army during a time of war. You raised your right hand and took an oath, knowing that your country might need you to carry out difficult missions in faraway places. Those duties did come. You accepted them and you put your hearts into the effort. On the ground in Iraq during all of 2007, you amassed a superb record. And I'm here to say thanks -- and welcome home. (Applause.)

It's been an extraordinary tour -- a time of difficulty, and sacrifice, and tremendous accomplishment. When you arrived in Iraq, the violence was escalating. The country risked falling into chaos, and many of its people were losing hope for the future. It was time for a new strategy, backed up by a surge of forces, to bring security to the people and breathing room to the leaders.

In some of the toughest areas -- Baghdad and Diyala -- the First Cavalry was the surge force. You went into the streets -- providing security, building up trust among the locals, and taking the fight directly to the enemy. The challenges were immense, but you never pulled away from the mission, and you did, in fact, turn things around. There's been a dramatic reduction in violence. Overall attacks and civilian casualties are down significantly. There are fewer IEDs, more weapons being seized. Al Qaida in Iraq has been significantly degraded. 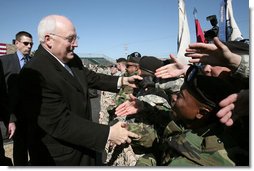 Your efforts, as part of the counterinsurgency ordered by the President and implemented by General Petraeus and General Odierno, helped prepare the way for the political progress that we're now seeing in Baghdad. In recent weeks, the Iraqi parliament has passed key legislation to advance the cause of reconciliation, power-sharing, and stability. These political victories for the Iraqi people would not have been possible in the violent atmosphere of 15 months ago. By your tenacity and skill, the forces of freedom have seized the initiative, and turned events toward victory.

The story of your deployment is summed up well in the words of Colonel David Sutherland of the Third Brigade. He said this: "The men and women in my formation fought day in and day out to destroy the terrorists and to bring peace to an area plagued by violence, destruction, and neglect. They went places no man or woman should ever have to go and they saw things no man or woman should ever have to see. They remained dedicated to their mission, and determined to bring peace and stability to a population whose normal life consisted almost totally of strife and suffering." Colonel Sutherland added this about his soldiers: "They are my heroes and their sacrifices are great."

All of you have been part of an effort that will go down in military history. And because of you, the people of Iraq can see a better day ahead. There is, of course, more to be done. The progress is undeniable, but it is reversible, and we must press on. The enemy regards Iraq as the central front in the war on terror -- and the enemy will continue to be very ruthless.

I don't need to explain the nature of this fight, because you've seen it firsthand. In the war on terror this country faces men who oppose and despise everything you know to be right, every notion of upright conduct and character, every belief you consider worth fighting and living for. They have given themselves to an ideology that rejects tolerance, that denies freedom of conscience, and induces fanatics to missions of murder and suicide. They have declared the intention to kill as many Americans as they can, by any means they can get their hands on. The terrorists are defined by their hatreds alone -- and they hate nothing more than the United States. 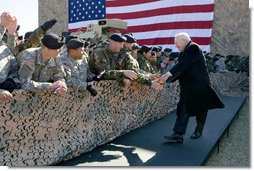 That is the kind of evil that produced the attacks of September 11th, 2001, when we saw thousands of our fellow citizens murdered, the Pentagon in flames, 16 acres of our great city in New York turned to ashes.

But 9/11 was not the first time terrorists attacked the World Trade Center. Fifteen years ago today, a bomb weighing more than half a ton was detonated beneath one of the Twin Towers. The difference was that in those days we treated terrorism as a matter for law enforcement -- where you go out and find the perpetrators, arrest them, try them, and put them in jail. But that wasn't enough to deal with the problem, because there was still a growing network of terrorists with operatives inside and outside the United States, waging war against us.

September 11th changed everything. We saw clearly that dangers can gather far from our own shores and find us here at home. We learned that the global terror network is a strategic threat to this nation, and must be dealt with as such. So our nation made a decision: To fight and win this war, we're going on the offensive, we'll confront the enemy directly and decisively, and we will persevere until that enemy is destroyed. (Applause.)

I don't think anyone believes that after 9/11 the terrorists decided to wait six or more years before hitting the United States again. The fact is they have tried repeatedly to wage more attacks, and they are hell-bent on succeeding. There's no way to guarantee it won't happen again. But we have managed to avoid another 9/11, not because of good luck but because of hard work. A lot of very dedicated professionals get up every day to protect the homeland. We've improved our security arrangements, reorganized our intelligence capabilities, and worked closely with friends and allies all over the world to track down terrorists. We've monitored enemy communications. And yes, we have interrogated high-value detainees, and gotten the information that has saved American lives. It's good we captured them, and it's good that we found out what they knew.

Most of all, ladies and gentlemen, we have kept the pressure on the enemy -- going after the terrorists and doing what it takes to shut down their training camps, to deny them sanctuary, to disrupt their funding, and to bring them to justice. In that effort, some of the most difficult and dangerous work has been carried out by all of you, the members of the United States Army. America is the kind of country that stands up to brutality, terror, and injustice. And you, the men and women of the First Team, are the kind of people we send to get that job done. 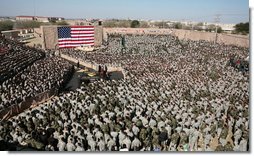 Having liberated Iraq from tyranny, the United States is keeping its promise to help the Iraqi people secure democratic gains and to chart their own destiny. We've done this kind of work in other places in other times -- and it's never been easy. But an Iraq that is free and democratic -- a country that can govern itself and defend itself -- could be an anchor of stability in an otherwise dangerous region of the world. And in the long run, freedom and democracy are the values that will defeat the murderous ideologies that lead to terrorism.

The enemy understands this every bit as much as we do. So the stakes are high on both sides, and that's why it's still tough going in Iraq. General Petraeus has said the operational environment is the most complex and challenging he's ever seen. Yet there's reason for confidence -- as more locals get into the fight, as more good intelligence tips come in, and as the government stays focused on the essential task of reform and reconciliation.

Iraqis know who their friends are. From Anbar province, to the neighborhoods of Diyala, to the streets of Baghdad, the people of that country are sick of the violence and treachery they've suffered at the hands of freedom's enemies. And the more they've seen of Americans like you, the better they feel about our country and our intentions -- and the greater hope they have for their own future. President Bush and I get briefings all the time about your operations and your achievements. We know about the trust you've gained among the Iraqis, the toughness you've shown in the face of danger, and the kindness you've shown to innocent people. That's what we expect of American soldiers. That's what you deliver, and we're proud of you every single day.

We know, as well, that you've had to face sorrow. Day to day, and minute to minute, you fought for the soldiers on either side of you. You did everything you could to protect them. And when a comrade falls, it's hard to say goodbye to someone you cared about, knew by name, and called a friend. You'll remember them. And the United States of America will honor their service, their sacrifice, and their memory forever.

This country has never been a warrior culture. We're a democracy, defended by volunteers. And those who wear the uniform are part of an unbroken line of honor and devotion that goes back more than two centuries. Soldiers in the Army have thrown back tyrants, liberated death camps, carried out heroic rescues, and kept the peace in volatile regions all over the world. And above all, they have kept us free in the land we call home -- free to live as we see fit, free to work, and to worship, and speak our minds. All of this, we owe to the men and women who have taken that oath to defend America. This nation will never take you for granted. And that also goes for your families -- because they, too, are serving and sacrificing for the United States of America.

The men and women of the First Cavalry live by the Warrior Ethos -- values of loyalty, duty, respect, selfless service, honor, integrity, and personal courage. And this great Division is also a picture of our country. Many of you are proud to call this great state home. We've got personnel at Fort Hood from all parts of the nation -- from New York, to Georgia, to Indiana, to California, and my home state of Wyoming.

All of America is represented here, and all of America respects you. I wish that every citizen of this country could see you and understand everything you've been through in training and on the field of battle. And for me it's a privilege beyond compare to see you, and to commend you for a job well done.

Whatever your future holds, you can always take satisfaction in the accomplishments of the past 15 months. You were there for America. You fought the good fight when the nation needed you most. You soldiered on and gave it everything that was in you.

Throughout its history, the First Cavalry Division has covered itself in glory. You've proven once again that the big yellow patch stands for skill, and courage, and honor. As Vice President -- and more than that, as a citizen of this country -- I'm proud to look you in the eye to express my deep gratitude and total respect for America's First Team.