For Immediate Release
Office of the First Lady
January 14, 2008

MRS. BUSH: Hello, everybody. Thank you all. Thanks so much. Thanks, everybody. Welcome to the White House. So good to see you all.

I want to recognize our -- the director of the Institute of Museum and Library Services, Dr. Anne Radice. Thank you so much. This is always a really fun event, and so I'm excited to see everyone here. I think Secretary Robert Gates is here. There he is, right here. Thank you for joining us. Secretary Carlos Gutierrez, Administrator Johnson from the EPA; thank you all very much. And Congressman Steve Cohen is also joining us. Thank you for coming to be with us. Dr. Sullivan, good to see you. 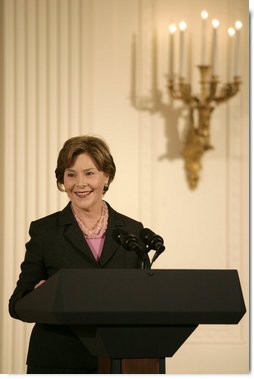 I want you all to know that we have two groups of students who just happen to be in Washington who've joined us today -- one group from Harpeth Hall in Nashville, and one group of Brazilian students who are here on a program that's a partnership between the United States and Brazil that brings Brazilian high-school-age students to the United States. They're spending a few days in Washington, then they're going to fan out around the country to Charlotte and Tulsa and Cleveland and Kalamazoo -- (laughter) -- and a few other places like that. So if you have a chance when this is over, I hope you'll speak to them and welcome them here to the United States.

Thank you for coming to celebrate the 2007 National Medals for Museum and Library Service. As a former librarian, and as someone who lives in a museum -- (laughter) -- this is one of my favorite events at the White House.

The novelist Richard Powers once wrote: "Librarian is a service occupation ... gas station attendant to the mind." (Laughter.) Excellent libraries and museums do fuel the imaginations of all of our people.

Our country is fortunate to have so many outstanding museums and libraries. This year, we've expanded the IMLS awards to recognize ten institutions -- all with impressive collections, and a strong sense of responsibility to the communities that they serve. 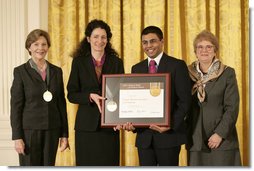 Just a few blocks east from here is the National Museum of Women in the Arts. Museum founder Wilhelmina Cole Holladay, who is with us today, was inspired to learn more about women artists when she searched through her college art history textbooks and could not find even one mention of a woman artist. Her desire to place women in the narrative of art history resulted in the National Museum.

Millions of visitors have learned about more than 1,000 women artists -- from Georgia Mills Jessup to Georgia O'Keeffe. The museum also cultivates future generations of women artists. The National Museum's "Role Model Workshops" pair middle- and high-school students with successful women artists, who educate them about fields ranging from dance and architecture to fashion and design.

The Oregon Museum of Science and Industry promises to put the "wow" in science for young people -- and for people who are just young at heart. Native American young people learn about their traditions from Oregon Museum of Science and Industry's Salmon Camp Research Team. After the OMSI Blazers Boys and Girls Science Club opened in one of Portland's most dangerous neighborhoods, gang-related incidents in the surrounding area dropped 43 percent.

Regular visitors to OMSI can touch a tornado, uncover a fossil, experience an earthquake, visit the Northwest's largest planetarium, explore a Navy submarine, or just experiment on their own in one of eight hands-on labs. Earlier this month, OMSI hosted a "Liquid Nitrogen Ice Cream Social." (Laughter.) I'm sure that tastes better than it sounds. (Laughter.)

Vermonters may live in a small state, but thanks to the Vermont Historical Society, they're proud of their history. The Society has partnered with 192 public libraries -- as well as 200 local museums and heritage organizations -- to educate citizens about their state's rich past. At the Society's annual History Expo, more than 6,000 people enjoy presentations, re-enactments, plays, readings by Vermont authors, and traditional craft demonstrations. The Expo is one of the many Historical Society programs that provide a crucial boost to Vermont's economy.

One resident even credits the Historical Society with preserving a cherished Vermont virtue. She writes: "I am in awe of what VHS accomplishes ... while exercising true Yankee thrift!" (Laughter.)

The Chicago Zoological Society trains future generations of wildlife enthusiasts. The Society's Brookfield Zoo is a living classroom for local students, who get to experience the sights, sounds -- and, for better or worse, the smells -- of the animal kingdom. (Laughter.) Each year, more than 2 million people come to meet the zoo's 2,100 animals.

Also in Chicago, the Newberry Library has put the Windy City on the map -- literally. With half a million maps in its collection -- as well as one and a half million books, and five million manuscript pages -- the Newberry is a world-renowned research facility. The library's recent exhibition on Mexican colonial history showcased the first map of Mexico printed in Europe, and ancient Aztec history from the perspective of native historians.

The Newberry uses its collections, and expertise, to help African Americans find their families' place in our country's history. One African-American patron had sought an ancestor for years, but without success. With help from a Newberry reference librarian, he discovered why. This patron, who'd always assumed he was descended from slaves, found the ancestor in a database of free men.

African Americans' struggle for equality is chronicled in fascinating detail by the Birmingham Civil Rights Institute. Since 1992, more than 2 million visitors have touched the cell bars that imprisoned Martin Luther King as he penned the "Letter from a Birmingham Jail." Replicas of a burnt-out bus and a segregated street car -- as well as images and sounds of historic court battles -- allow visitors to walk in the footsteps of the men and women who marched for freedom.

The Institute's Birmingham Cultural Alliance Partnership -- an after-school program that has served more than 1,200 middle-school students and their families -- has helped 88 percent of the participants improve their academic performance. January events at the White House are becoming an annual tradition for the Birmingham Civil Rights Institute: Last year, B-CAP won the President's Council on the Arts and Humanities "Coming Up Taller" Award -- the highest honor for after-school programs in the arts and humanities.

There must be something in the air in New Jersey -- library excellence, that is. With us today is the 2008 National Librarian of the Year: New Jersey State Librarian Norma Blake. Where is Norma? There you are. (Applause.) We're also joined by representatives of New Jersey's largest public library system, the Ocean County Library. The library's mission is "Connecting People, Building Community" -- and the library staff takes their mission seriously. U.S. citizen workshops help immigrants through the naturalization process. Library discussion groups promote understanding between Muslims and Orthodox Jews. Library staff even share authentic ethnic dishes at their "One World Potluck Party."

Twenty-six of the library's 600 volunteers have received the President's Volunteer Service Award. And through its "Hurricane Katrina -- Partners in Caring," the library raised more than $120,000 to help restore the Hancock County Library System in Bay St. Louis, Mississippi. The Katrina service project established close bonds between these two shore communities. After today, the libraries will have something else in common: an IMLS award for outstanding library service.

Humboldt County's Kim Yerton Memorial Library is the only public library in California located on an Indian reservation. It's also the center of the rural Hoopa Valley community. Through the library's "Threadbenders" group, mothers and grandmothers trade tips on native fiber arts. The library's large collection of Native American materials helps to keep alive the disappearing Hupa language.

Pre-schoolers come to the library for Story Time during the school day, and the College of the Redwoods campus across the street uses the Kim Yerton Memorial Library as its own. The First 5 Humboldt Program brings families to the library for stories, videos, and crafts to encourage childhood literacy. And thanks to the Kim Yerton library, student test scores are up throughout the local district.

Georgetown, South Carolina, has a public library with a past. One of its original donors was Vice President Aaron Burr. When the library was established in 1799, more than 90 percent of the people in Georgetown County were slaves. Today, the library brings together patrons of all races to study their county's history. In 2001, the library organized a two-week visit by the Freedom Schooner Amistad. More than 20,000 people came to explore this replica of the historic slave ship, and to participate in library-sponsored lectures and exhibitions.

One 90-year-old patron, Minnie Kennedy, shared her thoughts about the library in the "Women of Georgetown County" documentary. "I was able to leave a record of my experiences for future generations," she says. "Will they understand how I helped build liberty vessels during WWII in the shipyards up north? ... Will they appreciate why I was jailed trying to register folk to vote? Yes, the library has given me a voice," Ms. Kennedy says. "It's definitely a very important part of our community." And like Ms. Minnie says, each of the libraries and museums recognized today is a very important part of the community.

Thank you to the staff of these libraries and museums for your innovation and your outstanding service. And congratulations to each one of you on these awards. (Applause.)

Now I'd like to introduce someone who's dedicated her life to the arts, education, and service. Ladies and gentlemen, the director of the Institute of Museum and Library Services, Anne Radice. (Applause.)

MRS. BUSH: Okay, congratulations to everyone here. This is always so much fun for me to have this chance to see and hear about all the great library and museum programs that are going on. And I know you represent many, many, many hundreds more of great libraries and museums across the United States.