For Immediate Release
Office of the First Lady
October 12, 2007

Thanks very much to everyone here at the Foundation for this award. It's a huge honor, and I appreciate it very, very much.

I also want to acknowledge all of the leadership of NIAF -- the President, Salvatore Zizza, Vincent Viola, Jerry Colangelo, Joe Del Raso, John Salamone, and the Honorable Letizia Moratti, the Mayor of Milan. Thank you. We've had a couple of very fun times together -- a breakfast once, and then this week, we went to the performance of La Scala, when La Scala was here at Strathmore. I hope all of you had the chance to go. It was a really, really wonderful performance, and even got today a great review in the Washington Post. That's something George and I are still looking for. (Laughter and applause.) 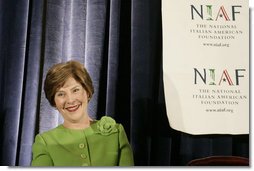 And of course, I want to recognize my friend, Leila Castellaneta, and her husband, of course, the Ambassador from Italy. Thank you all very much for your friendship.

Members and friends of the National Italian American Foundation, I'm delighted to be with you today to celebrate Italian Heritage Month.

Across the United States, more than 25 million people claim Italian ancestry. They include leaders of fashion, business, and government -- including 30 members of the United States House and Senate, two Justices on the Supreme Court. They're found in education and the arts, in sports and the sciences, and on our White House staff. (Applause.)

Whether in old neighborhoods like the North End, Mulberry Street, and North Beach, rural farmlands, or expanding suburbs, Italian Americans enrich communities across our nation. Your love of life makes our cities and towns more vibrant. Your love of the United States makes our country stronger. In World War II, over a million Italian Americans defended the United States against the Axis powers. (Applause.) During the Civil War, one of the early Medals of Honor went to a Turin native named Luigi Palma di Cesnola. Reflecting Italian Americans' broad achievements, this Union soldier later became the first director of New York's Metropolitan Museum of Art. (Applause.) 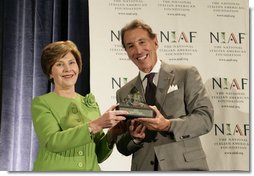 For more than 30 years, the National Italian American Foundation has worked to preserve this rich heritage. You conduct student exchange programs between Italy and the United States. You champion Italian Americans in government, media, and the arts. The Foundation connects friends of Italy through online forums, and reconnects Americans with their Italian families. I'm particularly interested in one of your most popular programs: the Italian Wine of the Month Club. (Laughter.)

The Foundation promotes the achievements of Italian Americans by recognizing outstanding individuals of Italian descent. Congratulations to all of the accomplished Italian-American women who are being honored this afternoon: my friend Susan Molinari, Pat Harrison, Marie Garibaldi, Nancy Chistolini, Lidia Bastianich -- I know how to say that -- and Deana Martin and Connie Stevens. Congratulations to each one of you. (Applause.)

The National Italian American Foundation also honors an important bond between Italy and the United States, and that is our shared love of learning. A good education -- in any language, and in every country -- starts with literacy. Thank you for recognizing the importance of literacy with this Special Achievement Award. I understand that the honor has gone to only one other person -- former First Lady Barbara Bush. And I know it's always a good idea to follow the lead of your mother-in-law. (Laughter and applause.)

My mother-in-law and I are both proud of the work that the American people, through our government, do to increase literacy at home and around the world. In the United States, through the No Child Left Behind Act, we've helped improve the reading skills of millions of children. Reading scores for 4th graders are now the highest on record, and the reading achievement gap between white students and African-American students is at an all-time low.

The National Italian American Foundation understands the importance of education. Each year, the Foundation devotes more than a million dollars to educational programs. You provide grants to individuals, schools, institutions, and community groups that teach citizens about the Italian language and history.

Foundation scholarship programs support students of all backgrounds as they study Italian language and culture. And they help outstanding Italian-American students from low-income families pursue a college degree.

One of these students is Lawrence Camarota. Lawrence lives with a learning disability, and his school career has been complicated by Type I Diabetes. Lawrence's single mom provides for her family with limited savings and child support. For Lawrence, college seemed like an impossible dream -- despite the fact that he earned a 4.4 GPA in high school, and scored a near-perfect 1560 on his SATs. Now this talented young Italian American is earning his degree in Aerospace Engineering from MIT -- with help from a scholarship from NIAF. (Applause.)

Each year, graduate students preparing to become teachers of the Italian language benefit from Foundation mentoring programs and professional-development workshops. These future instructors learn from native Italian speakers through Foundation exchange programs, organized with the Italian Ministry of Foreign Affairs. Eighteen of these future teachers are with us today. They're joined by another excellent Italian instructor, Peter LoJacono -- LoJacano -- sorry -- who's been named by the Foundation as the 2007 Italian Teacher of the Year. Congratulations to Peter and to all these teachers. (Applause.) Would you all stand up? Peter. Thank you, Peter. What about the other teachers? Are they here? Studying instructors? Are the other Italian instructors here, besides Peter? The young teachers? I guess not. Congratulations, Peter. (Applause.)

And congratulations to the Foundation on 32 years of excellent work. Because of you, millions of Americans are proud of their heritage -- and millions more have a greater appreciation for the Italian language, history, and culture.

I wish all of you the very best for this Italian Heritage Month. And thank you again. I'm so honored with this award.

Thank you all very, very much.