For Immediate Release
Office of the Press Secretary
October 7, 2007

THE PRESIDENT: Thanks for the warm welcome. David, thank you very much for your introduction. Nothing better than being introduced by an old fire chief. And I thank you for your service, Dave. It is such an honor to be here. I was telling Laura on the phone -- she didn't make it, I apologize, and so does she -- but I said I'm going down the hill -- I was up at Camp David -- I'm going down the hill to be with some remarkable people and their families, and to honor those who served. I said, I can't wait to go, and to be in their midst, because I hold the firefighters in such high regard; I have a deep respect in my soul for people who serve our communities. 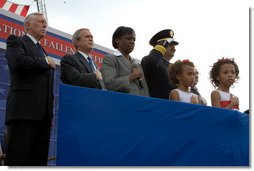 As David mentioned, far too often we go to sites that have been devastated by natural disaster, for example. Every time the firefighters are there, every time. It's clear that the people here who wear the uniform have a different view of jurisdiction than a lot of our citizens. You know, from New York after 9/11, to New Orleans after Katrina, there were firefighters from around the country there to help. The bond between the firefighters is obviously unique; it is definitely a source of strength. And it's a reminder that the work here is a calling, not a job.

I also am amazed at the compassion I see amongst those who wear the uniform for their comrades. Anyway, thanks for having me. I'm sorry it's under these circumstances that we have to be together. I hope our presence can help heal your hearts just a little bit. I'm looking forward to giving you a hug if you want a hug, or smiling for a picture if you want to smile for a picture. But most of all, I'm looking forward to honoring your loved ones.

You know, it takes a special kind of person to be a firefighter. It begins with a different sense of direction. When an area becomes too dangerous for everybody else, you take it over. When others are looking for the exits, our firefighters are looking for the way in. When the frightened occupants of a burning building are rushing down the stairwell, our firefighters are going the opposite direction -- up the stairs, and toward the flames. 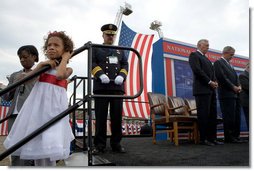 And you wonder where people like this get their courage? I'm sure a lot of it has to do with how they were raised, or the examples of other firefighters in the communities in which they live. But the truth of the matter is, that courage also comes from the community of firefighters. You work as teams, share meals together. And when tragedy strikes, your dedication to one another ensures that no family will ever have to face it alone.

Your presence here is a sign of that camaraderie. I see grieving widows sitting side-by-side with a firefighter in uniform -- it's the camaraderie of respect and compassion. Today 91 new names go up on this memorial. It is sometimes said of your fallen comrades that they lost their lives in the line of duty. On this day, at this place, we say more accurately: The men and women we honor are people who gave their lives in the line of duty.

We honor the service and sacrifices of firefighters like Kevin Apuzzio of New Jersey. Kevin started his career at age 16 when he joined an emergency medical unit. In college, he signed up for the East Franklin Volunteer Fire Company. Kevin was killed when he was trying to rescue a 75-year-old woman from her burning home. At Rutgers University, where Kevin was a student, they have named a Public Safety Training Center after him. And the president of the school put it simply: "We want people to know that a hero walked on this campus."

We honor the service and sacrifice of firefighters like Amy Schnearle-Pennywitt of Michigan. Amy grew up dreaming of being a firefighter, and she achieved that dream. On a freezing morning in 2006, the Ann Arbor Fire Department responded to a crash on an icy highway. And Amy arrived on the scene, and then was fatally struck by a pickup truck that had skidded out of control. In a tribute, the local newspaper called firefighters like Amy the backbone of our society. I believe that, too. The editorial put it this way: "We call them. And they come."

We honor the service and sacrifice of firefighters like Destry Horton. Destry worked for two fire departments in Oklahoma -- the local department in Chickasha, and the Grady County Fire Department. Destry was killed because he gave up a day of golfing so he could to help his comrades battling the wildfires in southern Oklahoma. He suffered terrible burns, and those burns would take his life. I found it interesting that at his funeral, a contingent of firefighters from New York showed up to pay their respects. Here's what one of them said, he said, "It's sort of payback from after [September] the 11th [when] we had firefighters from around the world who came to show their support [for us]. This is a brother, and we wanted to be here." 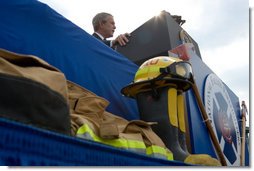 Families of our fallen firefighters have suffered a terrible loss. No words can ease the ache in your hearts. At this difficult time, we will try to help by taking you in our arms. We offer you our heartfelt and sincere compassion. We hope it is some comfort to know that your loved ones will live on forever in the memory of the communities they served so well.

To the colleagues of those who have fallen: Your fellow firefighters knew the risks when they took the oath of service. Take pride in the example they have set. Honor their memory by carrying on the fine work that they were so proud to do by your side.

And to all Americans: Across our great country, homes still stand and families can go about their lives because firefighters put themselves in harm's way to protect us. So when you walk by a firehouse or see an ambulance on a street corner, take a moment to go up and say "thank you." I ask my fellow Americans to pray for their safety, and pray that we live lives worthy of the sacrifices made by those whose names we add to this memorial today.

I appreciate you having me. I ask for the Almighty's blessings on you, and may he continue to bless the United States of America. (Applause.) 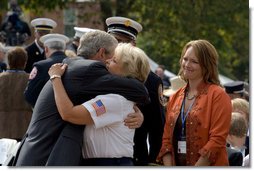 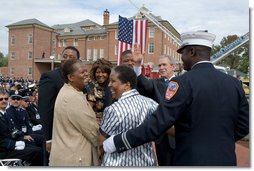 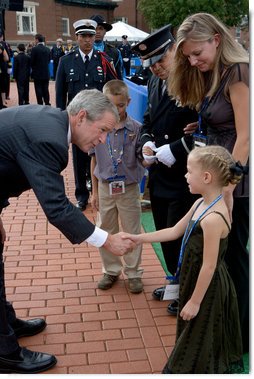