For Immediate Release
Office of the Press Secretary
August 27, 2007

THE PRESIDENT: I congratulate Iraq's leaders on the agreement reached yesterday in Baghdad. I've been briefed on the agreement, and this morning I spoke to Iraq's elected leaders. These leaders represent all the Iraqi communities. These leaders -- Prime Minister Maliki, President Talabani, Vice President Hashimi, Vice President Abd al-Mahdi, President Barzani -- recognize the true and meaningful reconciliation that needs to take place, and they recognize this is a process. Yesterday's agreement reflects their commitment to work together for the benefit of all Iraqis to further the process. 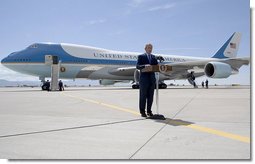 While yesterday's agreement is an important step, I reminded them, and they understand, much more needs to be done. The Iraqi parliament will convene again in early September, and it will need to act to codify this political progress.

It's in our interests that we help the Iraqi people succeed. Success in Iraq will be a major blow to the extremists and radicals who would like to attack America again. And that's why the United States will continue to support Iraq's leaders and all the Iraqi people in their efforts to overcome the forces of terror that seek to overthrow a nascent democracy.