For Immediate Release
Office of the Press Secretary
May 29, 2007

THE PRESIDENT: Good morning. For too long, the people of Darfur have suffered at the hands of a government that is complicit in the bombing, murder, and rape of innocent civilians. My administration has called these actions by their rightful name: genocide. The world has a responsibility to help put an end to it. 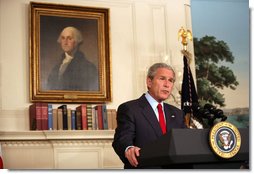 Last month I announced that the United States was prepared to take new steps if the government of Sudan did not allow the full deployment of a U.N. peacekeeping force; if the government did not begin living up to its many commitments, that the United States would act. I made clear that the time for promises was over, and that President Bashir had to do something to end the suffering.

One day after I spoke, the military bombed a meeting of rebel commanders designed to discuss a possible peace deal with the government. In following weeks, he used his army and government-sponsored militias to attack rebels and civilians in South Darfur. He's taken no steps to disarm these militias in the year since the Darfur peace agreement was signed. Senior officials continue to oppose the deployment of the U.N. peacekeeping force.

The result is that the dire security situation on the ground in Darfur has not changed. And so today, at my instruction, the United States has taken the steps I announced in April. First, the Department of Treasury is tightening U.S. economic sanctions on Sudan. With this new effort, the United States will more aggressively enforce existing sanctions against Sudan's government.

As part of this effort, the Treasury Department will add 30 companies owned or controlled by the government of Sudan to its list of Specially Designated Nationals. We're also adding an additional company to the list, a company that has been transporting weapons to the Sudanese government and militia forces in Darfur. All these companies are now barred from the U.S. financial system. It is a crime for American companies and individuals to knowingly do business with them.

Second, we're targeting sanctions against individuals responsible for violence. These sanctions will isolate these persons by cutting them off from the U.S. financial system, barring them from doing business with any American citizen or company, and calling the world's attention to their crimes.

Third, I'm directing the Secretary of State to consult with the United Kingdom and other allies on a new United Nations Security Council resolution. This resolution will apply new sanctions against the government of Sudan, against individuals found to be violating human rights or obstructing the peace process. It will impose an expanded embargo on arms sales to the government of Sudan. It will prohibit the Sudanese government from conducting any offensive military flights over Darfur. It will strengthen our ability to monitor and report any violations.

America's commitment is clear. Since this conflict began we have provided more than $1.7 billion in humanitarian and peacekeeping assistance for Darfur. We are the world's largest single donor to the people of Darfur. We're working for the day when the families of this troubled region are allowed to return safely to their homes and rebuild their lives in peace.

The people of Darfur are crying out for help, and they deserve it. I urge the United Nations Security Council, the African Union, and all members of the international community to reject any efforts to obstruct implementation of the agreements that would bring peace to Darfur and Sudan.

I call on President Bashir to stop his obstruction, and to allow the peacekeepers in, and to end the campaign of violence that continues to target innocent men, women and children. And I promise this to the people of Darfur: The United States will not avert our eyes from a crisis that challenges the conscience of the world.