For Immediate Release
Office of the Press Secretary
May 15, 2007

THE PRESIDENT: Thanks for coming, please be seated. Thank you. Thank you, Chuck. I have been here ever since I've been the President, in an event like this, and it's fitting because this is a really important day for our country. It's a day we remember men and women who fell in the line of duty. Each swore an oath to uphold the law. Each assumed the responsibility of protecting neighbors and communities. Each has earned a place in our nation's heart. We thank them for their lives of service and we pray to an Almighty God that He bring comfort to you during this time of sorrow. 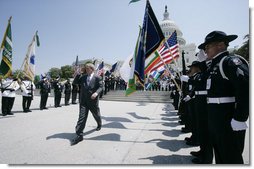 I appreciate Chuck Canterbury, President of the Fraternal Order of Police. I thank the members of my Cabinet who have joined us today. I appreciate so very much Speaker of the House, Nancy Pelosi, for being here today. I thank Senator Leahy, Majority Leader Steny Hoyer, Minority Leader John Boehner and all the members of Congress who have joined us. I thank Aliza Clark, Jim Pasco. Father Vytas, thank you for your prayers. Appreciate Patrick Nigh, who sang the National Anthem; Lee Greenwood, friend of law enforcement.

I thank the police officers who are here. I am honored to be in your presence. I'm constantly amazed by your courage. I thank you for serving the United States of America. (Applause.)

To the moms and dads, husbands and wives, and sons and daughters who have got a hole in your heart today, I bring a collective hug from the people of the United States of America.

It takes a special kind of person to serve in law enforcement. Most people run from danger -- law enforcement runs toward it. You've chosen one of the toughest jobs in the world. And I suspect during times of dangerous duty or lonely patrols, it might seem like the only person you can depend upon is each other. A day like today I hope not only helps our families, but helps those who serve remember that a larger community here in this country stands with you, that we're grateful for your service.

We saw this gratitude last year in Montgomery, Alabama, as thousands of citizens mourned a young officer named Keith Houts. Keith was shot during a routine traffic stop. He held on two days before succumbing; he was 30 years old. As expected, police officers from across Alabama came to mourn him, that's what happens -- when a fellow officer dies in the line of service, the officers show up -- but so did citizens he never met. Thousands and thousands of citizens came to honor this good man. An overflow crowd attended the funeral; every church pew was filled. Mourners had to stand. An anonymous citizen paid lodging expenses for members of Keith's family so they could make it to service. The community embraced Keith's young widow, Ashley, who's here. She had been a wife just for 15 months. Ashley said this of her late husband: "I know what he meant to me, but it is important to know what he meant to everyone else." 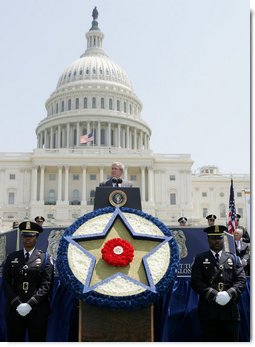 We've seen similar outpourings of support in other places. Last year, in Fairfax County, Virginia, thousands of strangers lined city streets to bid farewell to two officers, Vicky Armel and Michael Garbarino. They were shot while doing their duty. Those who gathered along one of the funeral routes included all kinds of people -- total strangers paying homage -- a grocery store cashier, a fellow from Belgium was there; a local resident who told a reporter she wanted to thank the police who, as she put it, "worry so we don't have to."

We saw a similar scene in Colorado Springs after the murder of Kenneth Jordan. Cars stopped along the interstate, as drivers watched the funeral procession from railings and bridges. Children were waving flags in honor of a good man. One man brought his sons to pay tribute to an officer who he said "gave up his life up for us." Another held up a sign that read: "God bless you and keep you safe. Thanks so much."

That sign sums up the feeling of millions of our fellow citizens: God bless you and thanks so much. Laura and I feel the same way. You know, we shared the grief of the family of Steve Favela, a Honolulu police officer who died last year from injuries he suffered during a motorcade that was protecting us. His death is a reminder of the daily risks that each officer assumes.

I don't know if you realize this, but police officers are routinely named among America's most respected profession. And that's why strangers mourn for the loss of life and honor those who serve. That's why so many children choose you as role models.

With us today are young children who've lost their moms and dads in the line of duty. It's got to be awfully hard. The pain is fresh, and they feel that every time they come home, looking for a mom or dad they love. It's hard to understand the loss you've suffered, but hopefully today you leave with the sense that there are all kinds of people praying for you and honoring your dad or mom; millions of Americans grieve. 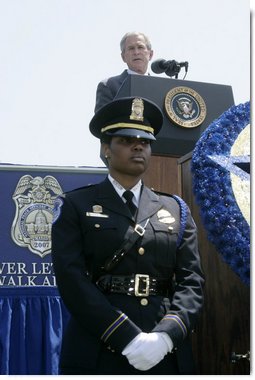 We're proud of all our nation's fallen peace officers. We're sorry you're here, but now that you are, we care about you a lot. And we love you. We're grateful for what they have given us.

May God bless you all. May God bless those who wear the uniform of the United States of America. And may God continue to bless our country. (Applause.)