For Immediate Release
Office of the Press Secretary
May 3, 2007

THE PRESIDENT: I want to thank my fellow Americans for joining me today to discuss a very important issue, and that is immigration.

In my discussions I've talked to clergy that recognize that our country needs a comprehensive immigration reform, and part of that is to help people learn English. I've talked to people who work for corporate America -- Andy works for Marriott International, a corporation that understands that it's very helpful, it's in their interest to help people assimilate. 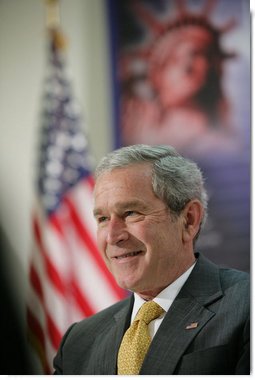 I've talked to Emilio, who works for the government, he's the head of the old INS, U.S. Citizen and Immigration Services. He has the opportunity often to swear in new citizens, and he sees the great -- the great hope that people have. I've talked to church workers who are reaching out in their communities to help people learn the benefits of the language, the English language. And thank you for tutoring and being kind.

I've talked to people that are raising families that have come from other countries, that are now U.S. citizens and understand the benefit of what it means to have learned English. Francisco said, when you learn English, doors open up for you. And I appreciate that beautiful sentiment, because it's true.

I'm looking forward to working with both Democrats and Republicans to get a comprehensive immigration bill done this year. We have a good chance to get it done. It's important for our fellow citizens to understand comprehensive immigration reform is in the nation's interest. And I'll continue working with members of Congress to encourage them to do the hard work necessary to make sure a system that is not working is reformed in a way that meets our national needs and listens to our national heart. After all, America is a land of immigrants. Immigration helps renew our soul. It helps redefine our spirit in a positive way. 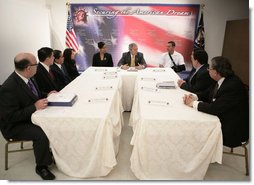 And I'm so proud to be with you and I thank you for your time. 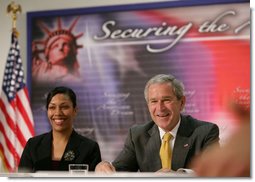