For Immediate Release
Office of the First Lady
February 25, 2007

Entertainment at the State Dinner for the Nation's Governors

Though Ronan Tynan enjoyed singing as a boy, he did not seriously consider formal voice study until he was 33 and well into his residency as a physician. His quick success is a typical development in a life of extraordinary achievement. Born with lower limb disability that threatened to sideline him throughout childhood, Tynan still rode horses and raced motorcycles. When he was twenty his legs had to be amputated below the knee after an auto accident caused serious complications. Within a year, he was winning medals in the Paralympics as a mutilated athlete. Between 1981 and 1984, Tynan amassed eighteen gold medals and fourteen world records of which he still holds nine. 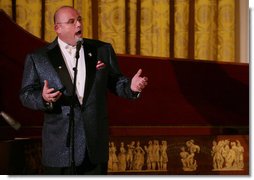 The determination instilled in Tynan by his parents soon propelled him to conquer a whole new field. He became the first person with a disability ever to be admitted to the National College of Physical Education. He later became a full-fledged medical doctor, specializing in orthopedic sports injuries, with a degree from Trinity College.

Tynan won both the John McCormack Cup for Tenor Voice and the BBC talent show Go For It less than one year after beginning to study voice. He also won the International Operatic Singing Competition in Maumarde, France. In 1998, Tynan joined Anthony Kearns and John McDermott as The Irish Tenors, an instant worldwide sensation. His autobiography Halfway Home was published in February 2001.

This gifted Irishman considers New York his home away from home. "The thing I love about New York and the states is that ...they encourage you, and they rejoice in your success. That's great virtue."