For Immediate Release
Office of the First Lady
January 17, 2007

MRS. BUSH: Thank you very much. Thank you, Madame Chirac, for bringing us all together and hosting us here. Thank you to the other members of the board for addressing this very important issue. And thank you very much, Mr. Wiesel, for your beautiful words that remind us all of our own humanity. 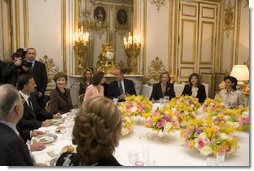 The United States made missing and exploited children a priority in 1981 when a young boy named Adam Walsh was kidnapped in a Florida department store. When Adam first disappeared, his parents had no network to call on to help to get their son back. Shortly after Adam's abduction, he was found murdered.

Adam's father, John Walsh, was determined that no parent should feel powerless to recover a missing child. His advocacy helped establish the National Center for Missing and Exploited Children, which has built an extraordinary network to keep families together.

Today, federal, state and local law enforcement cooperate to pursue kidnappers across state lines. National registries alert parents about convicted sexual predators living in their neighborhoods. Across the United States, anyone can call a hotline to immediately report a missing child. In 1990, 62 percent of children reported missing to the center were recovered. Today, the number has climbed to 94 percent.

In the United States, some of the most important work to recover missing children is done by the American people. Just last week in Missouri, a tip from an observant child led to the rescue of two kidnapped boys, one who had been missing for four days, and one who had been missing for four years. The rescue was aided by our country's AMBER Alert system. Through AMBER Alerts, local law enforcement works with broadcast media and with transit authorities to make sure any American watching a TV or listening to a radio or passing a highway sign can help locate missing children. So far, AMBER Alerts have saved more than 300 young lives in the United States, and similar programs are now saving lives in countries across the globe, including France.

All governments must do their part to end global threats to children, because the abuse of a child anywhere is an offense to civilized people everywhere. Every year, approximately one million children are trafficked for commercial sexual exploitation. Every country must educate its citizens, especially women and children, so they can avoid this degradation. Governments must also reduce the demand for child prostitution among their own citizens. 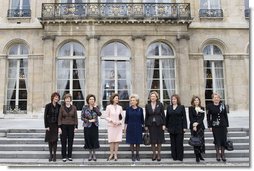 In recent years, President Bush has signed into law increased penalties for U.S. citizens who travel abroad to engage in sexual exploitation of children. While the digital age presents new opportunities, it also poses new threats to young people. The Internet allows predators to make contact with unsuspecting children. It means the exploitation of children in one country can devastate families half a world away. It has turned child pornography into a global crisis.

Pornographic images of children are not exercises in free speech. They are criminal acts of child abuse. The United States is working to end this abuse through the government's Internet Crimes Against Children task forces. With the help of task force members, federal prosecution of child pornography and abuse has increased from 350 cases in 1998 to more than 1,400 cases in 2005.

We expect even more advances in this fight against child pornography through our government's new Project Safe Childhood program. Announced by Attorney General Alberto Gonzalez in February 2006, Project Safe Childhood has launched a coordinated national response to the growing threat of online exploitation. Federal, state and local law enforcement cooperate to secure the strictest possible penalties against sexual predators. Project Safe Childhood is also partnering with the National Center for Missing and Exploited Children and the Ad Council to start a public awareness campaign that will teach parents and children how to avoid predators online.

Through our national and international Innocent Images Initiative, the American government works with law enforcement in 17 nations, as well as Europol, to end the nearly nine million documented global transactions of child pornography.

The abuses of children on the Internet respect no national boundaries. And we've seen that when governments cooperate with other nations, they keep children in their own countries safe.

In 2003, this international cooperation saved the life of a six-year-old American girl. In Denmark, a law enforcement officer discovered images online of this little girl being abused, and he reported them to Interpol. Within days, the images were recognized by the Toronto police service, which worked with American officials to decipher clues about the little girl's identity. The FBI examined pictures taken of the girl in her Scout uniform, traced the troop number in the photos, and followed the images to North Carolina. There they found the little girl, and the relative who had abused her, and he is now serving a 100-year sentence. 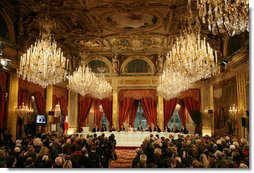 In the more than 175,000 images this man had on his computer, law enforcement found evidence that led to the arrest of child abusers in South Carolina, Texas and the United Kingdom. Because one person in Denmark tipped off Interpol, four children in the United States were saved.

Thanks to each of you for your work to keep children safe, and for helping families around the world fulfill their dreams of a healthy, happy and successful life for all of their children.