For Immediate Release
Office of the Press Secretary
December 27, 2006

THE PRESIDENT: My fellow Americans, all of us are saddened by the news that former President Gerald R. Ford passed away last night. I spoke with Betty Ford. On behalf of all Americans Laura and I extend to Mrs. Ford and all President Ford's family our prayers and our condolences. 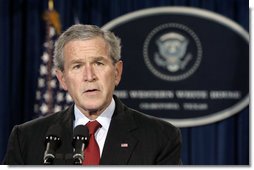 As a congressman from Michigan, and then as Vice President, he commanded the respect and earned the good will of all who had the privilege of knowing him. On August 9, 1974, he stepped into the presidency without ever having sought the office. He assumed power in a period of great division and turmoil. For a nation that needed healing and for an office that needed a calm and steady hand, Gerald Ford came along when we needed him most.

During his time in office, the American people came to know President Ford as a man of complete integrity who led our country with common sense and kind instincts.

Americans will always admire Gerald Ford's unflinching performance of duty and the honorable conduct of his administration, and the great rectitude of the man himself.

We mourn the loss of such a leader, and our 38th President will always have a special place in our nation's memory.

President Ford lived 93 years, and his life was a blessing to America. And now this fine man will be taken to his rest by a family that will love him always, and by a nation that will be grateful to him forever.