For Immediate Release
Office of the Press Secretary
December 18, 2006

THE PRESIDENT: Thank you all. I'm pleased to join you here at the Pentagon. We're here to congratulate Bob Gates on becoming our nation's 22nd Secretary of the Defense.

Bob Gates entered public service 40 years ago. He is an experienced and thoughtful leader. He has got a track record of steering large organizations through change and transformation. I know Bob Gates will be an outstanding Secretary of the Defense. 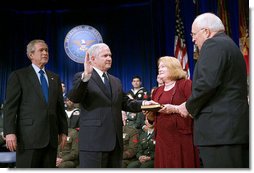 I want to thank Bob's wife, Becky, and their family, and their many friends who are with us here today. I appreciate the fact that the Vice President is here to administer the oath. I want to thank the members of my Cabinet who have joined us in welcoming a new member to the Cabinet. I appreciate so very much Senator John Warner and Senator Carl Levin for joining us. I thank the other members of the United States Congress who are with us today, not the least of whom is my Congressman, Chet Edwards, from Central Texas. I suspect he's here because of the Texas A&M connection. (Laughter.)

I want to thank Deputy Secretary England for joining us. I thank Dr. Harvey and Dr. Winter and Michael Wynne, Secretaries of the Army, Navy and Air Force, for joining us here today. I appreciate so very much General Pete Pace, Chairman of the Joint Chiefs, and his wife, Lynne, as well as the other members of the Joint Chiefs of Staff. I thank our distinguished guests.

Most importantly, I thank those who wear our uniform. This has got to be an exciting time for Bob Gates. I can't tell you what an honor it is to be the Commander-in-Chief of unbelievably fine people. And I suspect he will share that same sense of enthusiasm as the Secretary of the Defense.

The job of Secretary of Defense is one of the most important positions in our government. The Secretary must understand the challenges of the present, and see the threats of the future, and find the best ways to prepare our Armed Forces to meet them.

We are a nation at war. And I rely on our Secretary of Defense to provide me with the best possible advice, and to help direct our nation's Armed Forces as they engage the enemies of freedom around the world. Bob Gates is the right man to take on these challenges. He'll be an outstanding leader for our men and women in uniform, and he's going to make our nation proud.

Bob is a man of vision, integrity, and extensive experience. In 1966, Bob began his rise from an entry-level position at the Central Intelligence Agency to become its director. During his years of public service, Bob Gates has worked under six Presidents, from both parties. He spent nearly nine years at the White House working on the National Security Council staff. He's amassed nearly 30 years of experience in national security matters. Bob Gates' lifetime of preparation will serve him well as the Secretary of Defense.

Bob follows a superb leader at the Department of Defense. For nearly six years, Don Rumsfeld has served with exceptional strength and energy at a time of challenge and change, and he produced impressive results. During his tenure, he developed a new defense strategy, established a new command structure of our Armed Forces, helped transform the NATO Alliance, took ballistic missile defense from theory to reality, and undertook the most sweeping transformation of America's global defense posture since the start of the Cold War. He led our Armed Forces with determination and distinction. And on Friday at the Pentagon, the men and women he led showed their admiration and devotion to him. 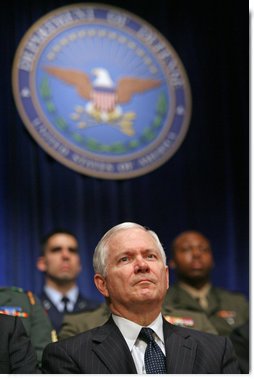 I want to thank Don Rumsfeld for his service, and I wish him and his family all the very best.

As Bob Gates raises his hand and takes the oath of office, he does so at a time of great consequence for our nation. He knows the stakes in the war on terror. He recognizes this is a long struggle against an enemy unlike any our nation has fought before. He understands that defeating the terrorists and the radicals and the extremists in Iraq and the Middle East is essential to leading toward peace.

As Secretary of Defense, he will help our country forge a new way forward in Iraq so that we can help the Iraqis achieve our shared goal of a unified democratic Iraq that can govern itself, sustain itself, and defend itself, and be an ally in our struggle against extremists and radicals.

Bob Gates is a talented and innovative leader who brings a fresh perspective to the Department of Defense. I'm pleased that he's answered the call to serve our nation again. He has my trust and my confidence. And he has the gratitude and the prayers of the American people.

And so I look forward to working with Bob Gates. I congratulate you, sir. I appreciate you taking on this job. And now, I'm going to ask the Vice President to administer the oath of office for our nation's 22nd Secretary of Defense. (Applause.)

MR. GATES: Thank you. Mr. President, I am deeply honored by the trust you have placed in me. You have asked for my candor and my honest counsel at this critical moment in our nation's history, and you will get both.

Mr. Vice President, thank you for administering the oath of office. I first worked closely with the Vice President when he was a very successful Secretary of Defense, and I hope some of that may rub off.

My sincere thanks to the members of the United States Congress who are here today. I appreciate the prompt and fair hearing that I received in the Senate and the confidence that senators have placed in me.

Chairman Pace, thank you. I look forward to working with you and the Joint staff. 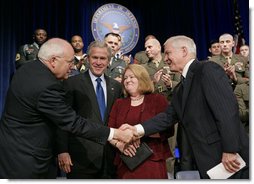 To the service chiefs and the service staffs, to all the uniform military here today, I value your professionalism and your experience, and I will rely on your clear-eyed advice in the weeks and months ahead.

Finally, I want to thank Becky, my wife of 40 years, and my children, Eleanor and Brad, for their infinite patience. I want to thank other family and friends who are here, but single out one especially, my 93-year-old mother. She told me that if she could make it from Kansas to Texas A&M football games every fall, she certainly could be in Washington for this ceremony. (Laughter and applause.)

I, too, want to say a few words about my predecessor. Donald Rumsfeld has devoted decades of his life to public service. He cares deeply about our men and women in uniform, and the future of our country. I thank him for his long and distinguished service, and wish him and Joyce and their family all the best.

It is an honor to have the opportunity to work with the people in this Department, dedicated professionals whose overriding priority is the defense of our nation. Long ago, I learned something about leading large institutions: Leaders come and go, but the professionals endure long after the appointees are gone. The key to successful leadership in my view is to involve in the decision-making process early and often those who ultimately must carry out the decisions. I will do my best to do just that.

This Department, as always, is carrying on many different activities all at the same time. All are valuable, all are important. However, as I said in my confirmation hearings, Iraq is at the top of the list. In the days since the Senate confirmed me, I have participated in most of the National Security Council meetings on Iraq, I have received a number of briefings here at the Department of Defense, and I have discussed the situation and way forward in Iraq in depth with the President.

I intend to travel quite soon to Iraq and meet with our military leaders and other personnel there. I look forward to hearing their honest assessments of the situation on the ground and to having the benefit of their advice -- unvarnished and straight from the shoulder -- on how to proceed in the weeks and months ahead.

Another pressing concern is Afghanistan. The progress made by the Afghan people over the past five years is at risk. The United States and its NATO allies have made a commitment to the Afghan people, and we intend to keep it. Afghanistan cannot be allowed to become a sanctuary for extremists again. How we face these and other challenges in the region over the next two years will determine whether Iraq, Afghanistan, and other nations at a crossroads will pursue paths of gradual progress towards sustainable governments, which are allies in the global war on terrorism, or whether the forces of extremism and chaos will become ascendant.

All of us want to find a way to bring America's sons and daughters home again. But, as the President has made clear, we simply cannot afford to fail in the Middle East. Failure in Iraq at this juncture would be a calamity that would haunt our nation, impair our credibility, and endanger Americans for decades to come.

Finally, there is the matter of what is referred to as defense transformation. As I mentioned in my Senate testimony, I was impressed by how deployable our military has become since I last served in government. Before he came to office, the President said that one of his top priorities was to help our military become more agile, more lethal, and more expeditionary. Much has been accomplished in this; much remains to be done. This remains a necessity and a priority.

I return to public service in the hope that I can make a difference at a time when our nation is facing daunting challenges and difficult choices. Mr. President, I thank you again for the opportunity to do that, and thank all of you for being here. (Applause.)