For Immediate Release
Office of the Press Secretary
December 14, 2006

PRESIDENT BUSH: It's been my honor to have a visit with the President of Benin. We had a very long discussion about a variety of subjects. My administration is committed to helping the democracies on the continent of Africa deal with very significant problems. The President and I are about to go to a summit where the United States of America will commit resources, time, and talent to help rid much of Africa of malaria. 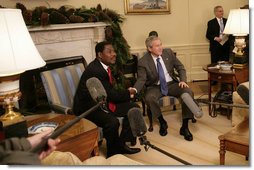 And, Mr. President, I'm proud to announce today that you're one of the countries that we'll be concentrating our help upon. We cannot succeed, however, unless there's an administration that is willing and capable to do the hard work necessary to educate people, spread nets, insecticides necessary to deal with a disease that can be defeated.

We talked about the Millennium Challenge Account. It's one of the most innovative foreign policy initiatives ever proposed by an administration. It's having a positive effect around the world. And I want to thank you for working toward that end.

We talked about the need for us to work together to deal with problems such as Darfur. The President recognized the genocide taking place in Darfur, as does the administration. We want to work through the United Nations to have a very strong and capable AU force, augmented by United Nations help, to save lives.

One thing I'm impressed with is the President's commitment to democracy, rule of law, decency and education. And to the extent that we can help -- continue to help your country, Mr. President, we will do so.

PRESIDENT YAYI: (As translated.) I have come here to, first and foremost, thank Mr. President Bush for all the initiatives that have been taken so far to eradicate poverty on the continent. As you may know, among these initiatives, we have the agua initiative, empowerment of women, the fight against HIV/AIDS, and the initiative of MCA -- that is Millennium Challenge Account. It is very important for us in Africa because the MCA will help us eradicate poverty. And I would like to thank President Bush for that last initiative he took.

Africa is aware of her responsibility in the roles she has to play, globally speaking, because we have to reach prosperity, and that prosperity has some conditions. We need peace. We need stability. We need security. And America has a leading role to play in our combat to restore a peaceful continent.

Of course, we have to be together with America to build -- succeed in all these challenges, to take up all these challenges. And multilaterally, it should be also a part of concern of the American people. We are aware of the fact that America can really play a very important role to continue building capacity among the institutions like IMF and the World Bank, and the institution of -- (inaudible) -- which is very important for us, also.

And the efforts should continue being made by the American government within the G8 group, because Africa needs a lot from this G8, and international exchanges also have to be reenforced. The Doha negotiations need to find a solution now, try to make it easier because cotton is but one of our important products in Africa. And in my country, two people out of three live out of cotton. It's the same reality in countries like Burkina-Faso, Mali, Senegal, where cotton is a very important product.

So some subsidies that go yet to some countries like America here cause a kind of disfunctioning in our country and on the continent also. So America should help us smooth this mechanism. I'm very happy to hear that America is trying to set up a parallel mechanism that would really help promote the production of cotton. So by the time the WTO will also reach an agreement, I think that this problem of Doha will be definitely solved.

Let me end my speech by saying that I want to thank the American government, thank President Bush, and the American people for all they are doing to really help us eradicate poverty on African continent.