For Immediate Release
Office of the Press Secretary
November 9, 2006

THE PRESIDENT: Earlier this week the American people went to the polls, and they cast their ballots for a new Congress. The American people made their decision; I respect the results, and so does my Cabinet. I want to congratulate the Democrat leaders on the victory they achieved for their party.

In a few minutes, Congresswoman Pelosi and Congressman Hoyer will be here for lunch. I'm looking forward to that visit. I'm also looking forward to my visit with Senator Reid and Senator Durbin tomorrow. We'll discuss the way forward for our country, and I'm going to tell him what I just told our Cabinet: It is our responsibility to put the elections behind us and work together on the great issues facing America. 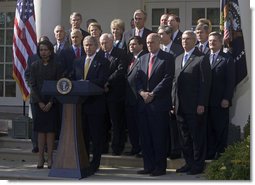 Some of these issues need to be addressed before the current Congress finishes its legislative session, and that means the next few weeks are going to be busy ones. First order of business is for Congress to complete the work on the federal spending bills for this year, with strong fiscal discipline, and without diminishing our capacity to fight the war on terror.

As the new members of Congress and their leaders return to Washington, I've instructed my Cabinet to provide whatever briefings and information they need to be able to do their jobs. The American people expect us to rise above partisan differences, and my administration will do its part.

One of the most important challenges facing our country is the war on terror, and Iraq is the central front in this war. Our country now has more than 149,000 men and women serving bravely in that country. Whatever party we come from, we all have a responsibility to ensure that these troops have the resources and support they need to prevail. I'm open to any idea or suggestion that will help us achieve our goals of defeating the terrorists and ensuring that Iraq's democratic government succeeds.

Yesterday I accepted the resignation of one of the original members of my Cabinet, Secretary Donald Rumsfeld. He could not be with us today because he's at Kansas State University to deliver the prestigious Landon Lecture, and to help dedicate the university's military science building as the General Richard B. Myers Hall.

Don has been an outstanding Secretary of Defense, a trusted advisor, and a loyal friend to me and his fellow Cabinet secretaries. I've named a good man to succeed Don Rumsfeld, former CIA Director Bob Gates. Secretary Rumsfeld has agreed to stay until Bob is confirmed, and I'm deeply grateful to Don for his service to our country.