For Immediate Release
Office of the Press Secretary
September 21, 2006

THE PRESIDENT: I want to thank the members of the United States Senate for working with my administration to meet our top legislative priority, and that is a law that will help us crack the terror network and to save American lives.

I had a single test for the pending legislation, and that's this: Would the CIA operators tell me whether they could go forward with the program, that is a program to question detainees to be able to get information to protect the American people. I'm pleased to say that this agreement preserves the most single -- most potent tool we have in protecting America and foiling terrorist attacks, and that is the CIA program to question the world's most dangerous terrorists and to get their secrets. 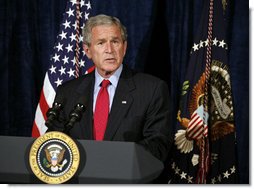 The measure also creates military commissions that will bring these ruthless killers to justice. In short, the agreement clears the way to do what the American people expect us to do, to capture terrorists, to detain terrorists, to question terrorists, and then to try them. I hope the Congress will send me legislation before it wraps up their business next week.