For Immediate Release
Office of the Press Secretary
July 7, 2006

THE PRESIDENT: Listen, thanks for the tour. The Speaker and I really enjoyed coming. Bill, appreciate you.

MR. NOGLOWS: It's an honor.

THE PRESIDENT: It is an honor to be here.

This is an innovative company that is a sign of the times that are coming. This is a company that strives upon our country's greatest asset, which happens to be the brain power of our citizens. And what's amazing as you walk through the labs and meet the people working here, you say, what's your degree in? Let me just say, there wasn't a lot of history majors -- physicists, chemists, PhDs., people with advanced degrees. It is clear that in order for this country of ours to be competitive in the future, we've got to understand the nature of the jobs of the future, and these jobs are going to require people who have got math and science skills. 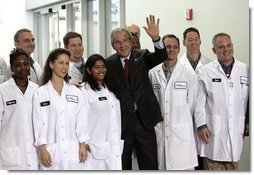 And so one way to make sure this country is competitive is to enhance math and science in early grades, and encourage people to take math and science in the later years. And there's all kinds of ways to do that. One is to encourage advanced placement programs in our nation's schools, and help train 30,000 teachers in advanced placement. Another is to get people from institutions like this to go into our middle schools and high schools and say, it's okay to be a scientist, you know; math and science will be important for your future. In other words, try to inspire people. We call that an adjunct professor program.

We've got a role at the federal government to make sure that we're research oriented in a technology-driven economy, and that is to spend your money on basic research, so that, for example, nanotechnology is a really important part of the economy -- an important growing part of the economy. And I believe, and the Speaker believes -- as a matter of fact the House of Representatives believes that it makes sense to double the basic research budget of our federal government to help companies like this stay on the leading edge of change.

And so we're here because we want our fellow citizens to understand that we've got some really innovative people here in our country, and that in order for us to be competitive in the future, we've got to emphasize math and science and research and technology.

And so I want to congratulate you for running a good company. I want to thank the people who work here for making you look good. (Applause.) And I thank the Speaker for getting a bill out of the House that funds the American Competitiveness Initiative that I sent up to Congress. The Speaker did good work on that. I call upon the Senate to get it done. This will be a commitment to our nation's future, so that people won't have to fear the future, because we intend to shape the future.

Anyway, thanks for letting us come by. Proud to be here. You're a great company. Thanks for the good work you do. God bless. (Applause.)