For Immediate Release
Office of the Press Secretary
May 10, 2006

THE PRESIDENT: Identity theft is a serious problem in America. I have just listened to the horror stories from fellow citizens who have had their identities stolen. I listened to their ideas about how the federal government can help in the response in not only dealing with those who commit the crime, but helping those who have been victimized. And I want to thank you all for joining us. Thanks a lot. 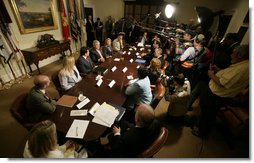 I appreciate Al Gonzales and Chairman Majoras, Deb Majoras, of the FTC for being here, because I just signed an executive order that has the Attorney General as the Chairman, the Chairman of the FTC as the Vice-Chairman of a coordinating group to make sure that this government of ours uses our assets in a responsible way, in a good way, to not only put those people who commit identity fraud in jail, but to help the victims of identity fraud.

I signed law enhancing penalties. Now what we're going to do is make sure that the 13 governmental agencies involved with identity theft have a well-coordinated strategy to help the victims and to put those who commit the theft behind bars.

Again, I want to thank you all very much for helping us understand the issues, but more importantly, telling a story of the emotions and the feelings that you went through during this -- difficult periods of your life.