For Immediate Release
Office of the Press Secretary
April 28, 2006 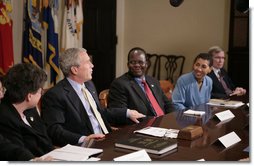 And there will be rallies across our country to send a message to the Sudanese government that the genocide must stop. Those rallies will also be an indication that thousands and hundreds of thousands of our citizens urge the world to unite with the United States in concerted action.

We have got AU troops on the ground; those troops need to be augmented and increased through strong United Nations action. And the United States strongly supports a U.N. resolution to do that. I believe it's important for the United States to be involved, and the best way to be involved with the AU troops is through NATO. I've worked with the Secretary General of NATO and our allies in NATO to provide a firm response to the actions that are taking place on the ground. I want the Sudanese government to understand the United States of America is serious about solving this problem.

I'm proud of our nation's generosity when it comes to aid, and the American people ought to be proud of the taxpayer dollars that have gone to provide much needed aid for those who suffer. But this government must understand that we expect the aid to get to the people and we expect there to be a solution to this problem.

There will be rallies all across the country. And for those of you who are going out to march for justice, you represent the best of our country. We believe every life is precious, every human being is important. And the signal you send to the world is a strong signal, and I welcome your participation. And I want to thank the organizers for being here.

I want to thank this good man right here -- he sits here next to his President, and it wasn't all that long ago that he was a slave inside Sudan. He sits here to represent the thousands of lives who have been affected by a government that must honor human rights.