For Immediate Release
Office of the Press Secretary
March 9, 2006

THE PRESIDENT: Welcome. Thanks for the applause. Glad you're here in the people's house.

I'm going to sign -- in a few moments I'll be signing the USA Patriot Improvement and Reauthorization Act. This is a really important piece of legislation. It is a piece of legislation that's vital to win the war on terror and to protect the American people.

The law allows our intelligence and law enforcement officials to continue to share information. It allows them to continue to use tools against terrorists that they used against -- that they use against drug dealers and other criminals. It will improve our nation's security while we safeguard the civil liberties of our people. The legislation strengthens the Justice Department so it can better detect and disrupt terrorist threats. And the bill gives law enforcement new tools to combat threats to our citizens from international terrorists to local drug dealers.

It is an important piece of legislation. And I thank those here who helped get it passed. I particularly want to thank the Attorney General, Al Gonzales. It's good to see former Attorney Generals here, as well. I appreciate Secretary Mike Chertoff, Secretary John Snow, Ambassador Negroponte, Bob Mueller. Thank you all for coming. John Walters, appreciate you being here.

I particularly want to thank the members of the Congress who are up here, starting with the Speaker of the House, Denny Hastert. Mr. Speaker, thanks for your leadership on this important piece of legislation. I do want to pay special tribute to Senator Arlen Specter and Congressman Jim Sensenbrenner. These are the Chairmen of the Judiciary Committees that got this legislation to this desk. Thank you all for your hard work. I appreciate you being here.

I want to thank Pat Roberts, who's with us; John Boehner, Majority Leader; Roy Blunt, the Majority Whip. I want to thank all the other members of the Congress who have joined us, particularly Peter King, who is the Chairman of the House Homeland Security Committee.

I want to thank all the state and local officials who are here -- Chief Ramsey, it's good to see you. Appreciate you coming. Always be good to the local police chief. (Laughter.)

America remains a nation at war. The war reached our shores on September the 11th, 2001. On that morning, we saw clearly the violence and hatred of a new enemy. We saw the terrorists' destructive vision for us when they killed nearly 3,000 men, women, and children.

In the face of this ruthless threat, our nation has made a clear choice: We will confront this mortal danger, we will stay on the offensive, and we're not going to wait to be attacked again. Since September the 11th, 2001, we have taken the fight to the enemy. We've hunted terrorists in the mountains of Afghanistan, cities of Iraq, the islands of Southeast Asia, and everywhere else they plot, plan, and train. Our men and women in uniform have brought down two regimes that supported terrorism. We liberated 50 million people. We've gained new allies in the war on terror. 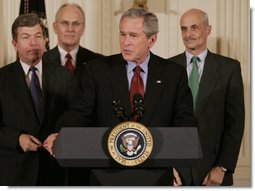 As we wage the war on terror overseas, we're also going after the terrorists here at home, and one of the most important tools we have used to protect the American people is the Patriot Act. The Patriot Act closed dangerous gaps in America's law enforcement and intelligence capabilities, gaps the terrorists exploited when they attacked us on September the 11th.

The Patriot Act has accomplished exactly what it was designed to do. It has helped us detect terror cells, disrupt terrorist plots and save American lives. The bill I sign today extends these vital provisions. It also gives our nation new protections and added defenses.

This legislation creates a new position of Assistant Attorney General for National Security. This will allow the Justice Department to bring together its national security, counterterrorism, counterintelligence and foreign intelligence surveillance operations under a single authority. This reorganization fulfills one of the critical recommendations of the WMD Commission: It will help our brave men and women in law enforcement connect the dots before the terrorists strike.

This bill also will help protect Americans from the growing threat of methamphetamine. Meth is easy to make. It is highly addictive. It is ruining too many lives across our country. The bill introduces common-sense safeguards that would make many of the ingredients used in manufacturing meth harder to obtain in bulk, and easier for law enforcement to track.

For example, the bill places limits on large-scale purchases of over-the-counter drugs that are used to manufacture meth. It requires stores to keep these ingredients behind the counter or in locked display cases. The bill also increases penalties for smuggling and selling of meth. Our nation is committed to protecting our citizens and our young people from the scourge of methamphetamine.

The Patriot Act has served America well, yet we cannot let the fact that America has not been attacked since September the 11th lull us into the illusion that the terrorist threat has disappeared. We still face dangerous enemies. The terrorists haven't lost the will or the ability to kill innocent folks. Our military, law enforcement, homeland security and intelligence professionals are working day and night to protect us from this threat. We're safer for their efforts, and we'll continue to give them the tools to get the job done.

And now, it's my honor to sign the USA Patriot Improvement and Reauthorization Act of 2005. (Applause.)